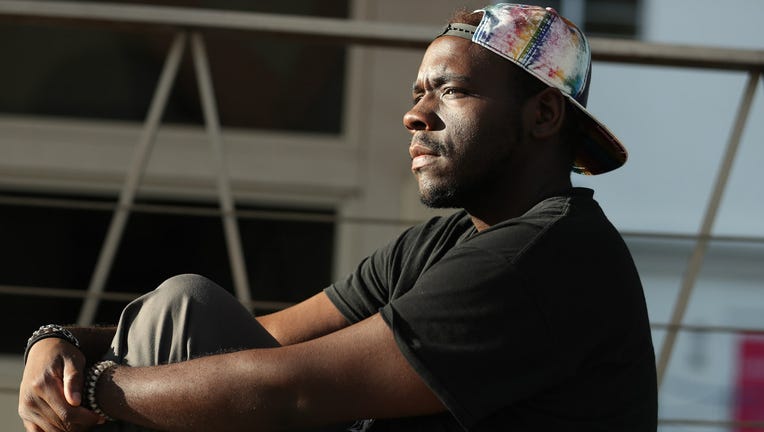 Niklaus Salvator poses near the hotel where he used to work on Ocean Drive on May 07, 2020 in Miami Beach, Florida. Mr. Salvator was laid off due to the hotel closing when the coronavirus pandemic hit. He joined millions of people who have seen simil (Joe Raedle/Getty Images)

WASHINGTON - In late March, Britney Ruby Miller, co-owner of a small chain of steakhouse restaurants, confidently proclaimed that once the viral outbreak had subsided, her company planned to recall all its laid-off workers.

Now? Miller would be thrilled to restore, by year’s end, three-quarters of the roughly 600 workers her company had to let go.

“I’m being realistic,” she said. “Bringing back 75% of our staff would be incredible.”

Call it realism or pessimism, but more employers are coming to a reluctant conclusion: Many of the employees they’ve had to lay off in the face of the pandemic might not be returning to their old jobs anytime soon. Some large companies won’t have enough customers to justify it. And some small businesses won’t likely survive at all despite aid provided by the federal government.

If so, that would undercut a glimmer of hope in the brutal April jobs report the government issued Friday, in which a record-shattering 20.5 million people lost jobs: A sizable majority of the jobless — nearly 80% — characterized their loss as only temporary.

That could still turn out to be the case for some. The federal government may end up allocating significantly more financial aid for people and small businesses. And more testing for the coronavirus, not to mention an eventual vaccine or an effective drug therapy, would make more Americans comfortable returning to the restaurants, shops, airports and movie theaters they used to frequent. That, in turn, would lead companies to recall more laid-off workers.

Yet Congress remains sharply divided about additional aid, with some Republicans expressing concern about escalating federal debt. President Donald Trump’s top economic adviser, Larry Kudlow, said Sunday on ABC’s “This Week” that “many people would like to just pause for a moment” to evaluate the impact of the government’s $2 trillion relief package approved in late March. 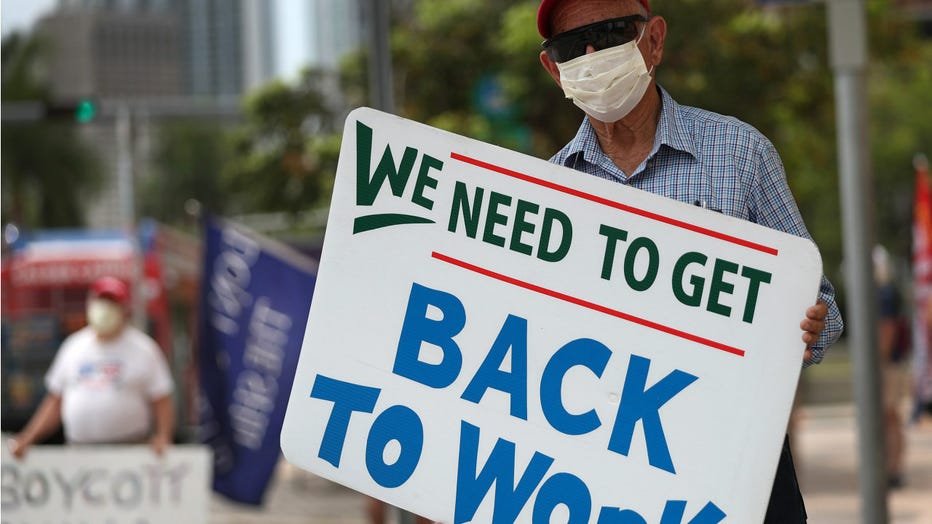 Pedro A. Delgado holds as sign reading, 'We need to get back to work,' as he joins with other protesters in front of the Freedom Tower on April 25, 2020 in Miami, Florida. (Joe Raedle/Getty Images)

If most layoffs become permanent, the severe recession the economy has slid into would likely last longer, the recovery would be slower and the toll on laid-off workers would be harsher, economists say. Unemployment soared to 14.7% in April — the highest rate since the Great Depression — and analysts predict it will rise still further in May. It could remain in double-digits into next year.

“For a lot of those furloughed workers, a non-trivial number will have no job to go back to, because the company they worked for will have failed or will need fewer workers than they used to,” said Claudia Sahm, a former Federal Reserve economist who is now director of macroeconomic policy at the Washington Center for Equitable Growth.

In March, MGM Resorts let go 63,000 employees and described them as furloughed, meaning temporarily laid off. Yet this week, the company acknowledged that many of those people will become permanently laid off by Aug. 31. The hotel and casino operator didn’t provide precise figures.

“We were optimistic at the time of the initial layoff in March that we would be able to reopen quickly,” Laura Lee, head of human resources, said in a layoff notice letter to the state of Michigan. “However, we have had to reassess our reopening date, given the duration and severity of the COVID-19 pandemic.”

In some ways, Miller, the restaurant owner, is more hopeful than she was when the shutdowns began: The states her company operates in — Ohio, Kentucky, and Tennessee — have begun to gradually reopen portions of their economies. Customers are phoning to see when they can make reservations. She hopes to reopen the five Jeff Ruby’s Steakhouses and two other restaurants the company operates by early June.

Yet business won’t be returning to what it was before. In Kentucky, the restaurants will be limited to 33% of capacity. They are putting six feet between tables in all their restaurants, thereby limiting seating. Miller estimates that the company’s revenue will plunge by half to three-quarters this year.

And expenses are rising because the company must buy face masks and other equipment for the workers it does recall and restock its food, drink, and equipment supplies. Miller is still optimistic that her business will, over time, return to normal.

If many of the job losses do prove only temporary, it would raise the possibility of a relatively swift economic recovery. It’s much easier for someone out of work to return to a former job than retrain for a new one or shift to a new industry. After the previous three recessions, the vast majority of people who were laid off lost their jobs permanently. Some were essentially replaced by new software or factory robots. In other cases, their employers folded or entered new lines of business.

After those recessions, the unemployment rate took so long to fall back to normal levels that economists began applying a chilling label: “Jobless recoveries.”

If a substantial number of small businesses are forced into bankruptcy, a similar dynamic could emerge this time, economists warn. Most job cuts by small companies in this recession have occurred because the business has shut down, whether by government order or from lack of demand, according to research released this week by Tomaz Cajner at the Federal Reserve and seven other economists. If those companies can’t reopen, those layoffs will become permanent.

Research by the JPMorgan Chase Institute has found that only half of all small businesses have enough cash on hand to last a month without revenue.

Even after government closure orders are lifted, many consumers won’t likely be comfortable shopping, eating out or attending concerts, movies or sporting events, especially as they used to — as part of tightly seated crowds. Not until the virus is well under control can a full economic recovery likely happen, economists say.

In the meantime, structural changes in the economy might help make many temporary layoffs permanent. It’s not clear, for example, when restaurants will need anywhere near as many workers they did before the virus struck.

Nelis Rodriguez has worked as a server at the M Restaurant & Lounge in the Warwick Hotel in downtown Chicago for 21 years. But revenue at the restaurant steadily disappeared as conventions that are critical for spring sales were canceled. She received two days’ notice of her layoff before the restaurant closed March 15th.

Rodriguez, 45, never thought she’d be thrown out of work, so she’d never thought about finding another job. But now she fears that as the coronavirus lingers, she might be laid off again and again.

“I think I will try to get out of the restaurant business altogether because I am afraid now,” she said.