Hair products are part of a billion dollar beauty industry and new information reveals that using hair dye and chemical hair straighteners may increase the risk of developing breast cancer.

Some women are opting for nonpermanent hair color and relaxers amid news of a study that found women who use permanent hair dye and chemical straighteners may be at an increased risk of developing breast cancer, but doctors say you might have better success preventing breast cancer through diet and exercise changes.

According to the study at the National Institutes of Health, higher breast cancer risk was associated with hair dye use, and the effects appeared to be stronger in African American women—particularly those who are frequent users of the dyes and chemical straighteners.

At Renee’s Touch salon, Renee Montgomery has been using the CHI hair dye brand—which does not include harsh chemicals like ammonia--but says she was still concerned when she heard about the new study. 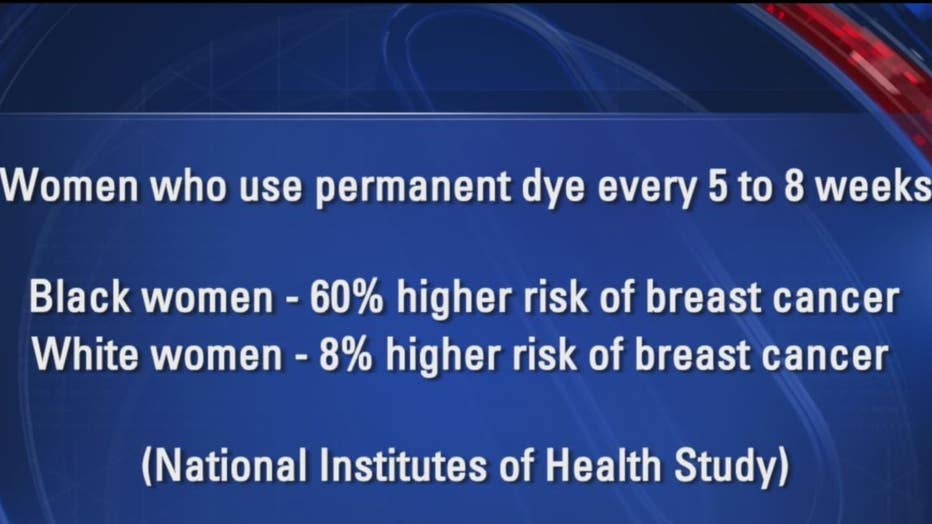 "So many of my clients actually have color and have straighteners or relaxers in their hair, so I was very concerned," said Montgomery.

The study used data from 46,709 women and found that women who regularly used hair dye were 9 percent more likely to develop breast cancer, but among women who used permanent hair dye every five to eight weeks, that risk increased to 60 percent for black women—compared to eight percent for white women.

"If you look at the number of African Americans in the study, it's very small compared to the number of Caucasians, so I don't know how accurate that would be if you applied it to a bigger population," said Julie R. Nangia, MD, from Baylor College of Medicine’s cancer center.

"I don't think I would recommend to my patients for them to stop using hair dye because of this study," said Nangia.

Montgomery said she personally avoids chemical straighteners and opts for a flat iron.

Nangia said if you want to avoid breast cancer, there are other factors to look at. Studies show alcohol use and not exercising have a much higher association with increased breast cancer risk.