The findings of the study showed that dog owners who lived alone had a 33 percent lower risk of death compared to those who suffered a heart attack and lived alone without a dog.

CLEVELAND - After suffering a heart attack or stroke, dog owners fare better than their dog-less counterparts when it comes to avoiding repeat cardiovascular events and even death after a hospitalization, according to a new study.

Turns out that after such a cardiovascular event, dog really is man’s best friend. The findings of the study showed that dog owners who lived alone had a 33 percent lower risk of death compared to those who suffered a heart attack and lived alone without a dog.

The study looked at 181,696 people between the ages of 40-85 who had previously suffered a heart attack or stroke, and measured the association of dog ownership with other cardiovascular events — such as repeat heart attacks or repeat strokes.

“What they found was that those dog owners actually had a lower risk of having recurrent cardiovascular events,” said Luke Laffin, M.D., of Cleveland Clinic.

The risk prediction models were adjusted for socioeconomic, health and demographic factors such as age, marital status, the presence of children in the home, area of residence and income, as well as registered comorbidities and hospitalization for cardiovascular disease in the past five years.

Similar results were found in relation to strokes. Dog owners had a 27 percent lower risk of death than people who lived alone and did not have a dog, and they had a 12 percent lower risk compared to those living with a partner or child.

The study also found an association between dog ownership with reduced risk of hospitalization for recurrent heart attack. 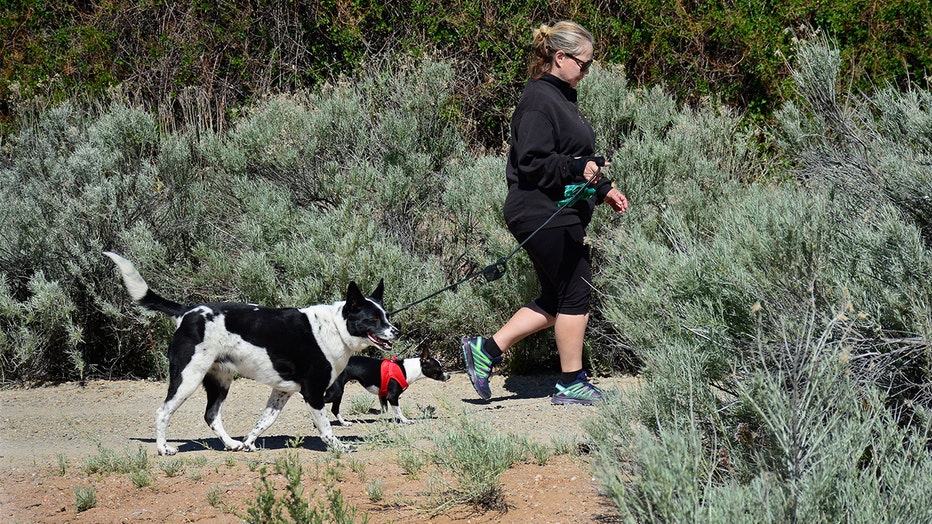 A woman walks her two dogs in Santa Fe, New Mexico. A new study found that dog owners are at lower risk of a repeat event after heart attack or stroke compared to those who live alone and do not have a dog. (Robert Alexander/Getty Images)

Dogs typically have to go for walks, which gets people out the door and moving, which is good for heart health, but they also provide companionship. It’s likely that many dog owners experience less loneliness than those who live alone and do not have a dog, and previous studies have shown that depression and loneliness can increase the risk of heart disease.

Laffin said people can still mimic the benefits of owning one for the sake of their heart health.

“They can go out for regular physical activity – maybe a walk, jog; even classes like yoga, swimming – those are all great activities that you don’t need a pet to do,” he said.

Regardless of if you’ve suffered a heart event, Laffin said getting more physical activity, on a regimented schedule, can go a long way towards better heart health and longevity.