Under the police recording bill that was signed into law, recording law enforcement within 8 feet is illegal, with some exceptions.

PHOENIX (AP) - Arizona Gov. Doug Ducey on Wednesday signed 47 bills from the Legislation session that ended nearly two weeks ago but vetoed three, including a measure that would have asked voters in Maricopa County to extend a sales tax that funds transportation projects.

But Ducey did not act on arguably the most contentious bill of the year, a measure he backs that is opposed by public education advocates to make every Arizona child eligible for a private school voucher. That is the last bill on his desk and will wait for Thursday, the bill signing deadline.

The Republican governor’s veto letter for the transportation tax called it ill-timed because of rampant inflation, too early because the current tax does not expire until 2025 and ill-advised because it calls a special election next spring when turnout is likely to be low.

He also called the ballot language for the extension of the half-cent sales tax that has helped fund the Phoenix freeway system, roads and the light rail system for nearly 40 years deceptive and misleading.

Maricopa is the only county in the state that must ask the Legislature for permission to ask their voters to impose a transportation tax.

Ducey also vetoed measures requiring group homes contracted with the Department of Economic Security to care for he developmentally disabled to be licensed by the state health department. He said the measure provides no funding while noting the $18 billion budget he signed last week boosts pay providers and creates a panel to oversee group homes.

He also vetoed a bill requiring that the state not withhold money from Phoenix if its convention center revenues fell during a state of emergency, like one declared for the COVID-19 outbreak. Ducey said it was a worthy goal but addressed an issue that may never reoccur.

The governor signed a pair of measures pushed by majority Republicans infuriated with COVID-19 restrictions, including one that allows an employee fired for refusing to take a coronavirus vaccine to get unemployment insurance. If the employer is required to ensure their workers are vaccinated, they will not be charged higher premiums.

He also approved an election measure opposed by civil rights and media groups that makes it illegal to videotape police officers within 8 feet (2.5 meters) or closer. Rep. John Kavanagh’s bill originally banned taping from 15 feet (4.5 meters) away. It makes an offense a misdemeanor.

A last-minute measure to create a new tax credit for film production that led to partisan fights among Republicans was allowed to become law without the governor’s signature.

Republican House Speaker Pro Tem Travis Grantham called the film credit bill "grossly unconstitutional" and said he was falsely accused by bill sponsor Sen. David Gowan of reneging on a deal to ensure the measure got a vote, which it eventually did.

Gowan’s bill provides tax credits that starts at $75 million in 2023, go to $100 million the following year and top out at $125 million in 2025 and subsequent years. One film can only receive $25 million. Backers said the film industry brings good-paying jobs and helps boost Arizona’s national standing. 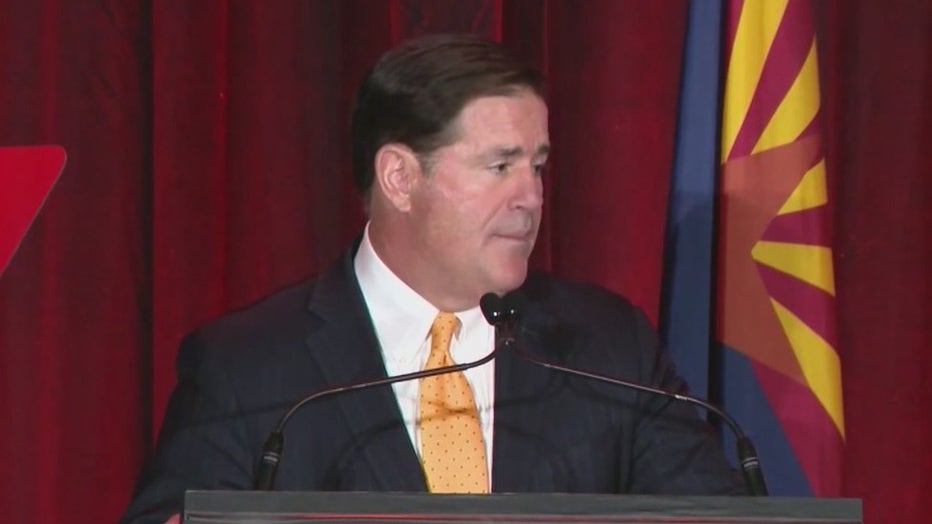