As proceedings began, Republicans abandoned Majority Leader Mitch McConnel's proposed rule for the trial that would have crammed opening arguments into two late-night sessions later in the week. The turn of events was a setback for McConnell and the president's legal team, exposing a crack in the GOP ranks and the growing political unease over the historic impeachment trial.

WASHINGTON (AP) - In opening arguments of the impeachment trial, President Donald Trump's defense misrepresented the findings of a special counsel's report on Russian interference in the 2016 election by claiming the president was cleared of obstruction of justice.

A look at some of his legal team's claims Tuesday during debate on the format of the Senate trial:

JAY SEKULOW, on special counsel Robert Mueller: “We had the invocation of the ghost of the Mueller report. I know something about that report. It came up empty on the issue of collusion with Russia. There was no obstruction, in fact.”

THE FACTS: He’s wrong to suggest that special counsel Robert Mueller's report cleared the Trump campaign of collusion with Russia. Nor did the report exonerate Trump on the question of whether he obstructed justice.

Instead, the report factually laid out instances in which Trump might have obstructed justice, leaving it open for Congress to take up the matter or for prosecutors to do so once Trump leaves office.

“If we had had confidence that the president clearly did not commit a crime, we would have said so,” Mueller declared after the report was released.

Mueller's two-year investigation and other scrutiny revealed a multitude of meetings with Russians. Among them: Donald Trump Jr.'s meeting with a Russian lawyer who had promised dirt on Hillary Clinton.

On collusion, Mueller said he did not assess whether that occurred because it is not a legal term.

He looked into a potential criminal conspiracy between Russia and the Trump campaign and said the investigation did not collect sufficient evidence to establish criminal charges on that front. 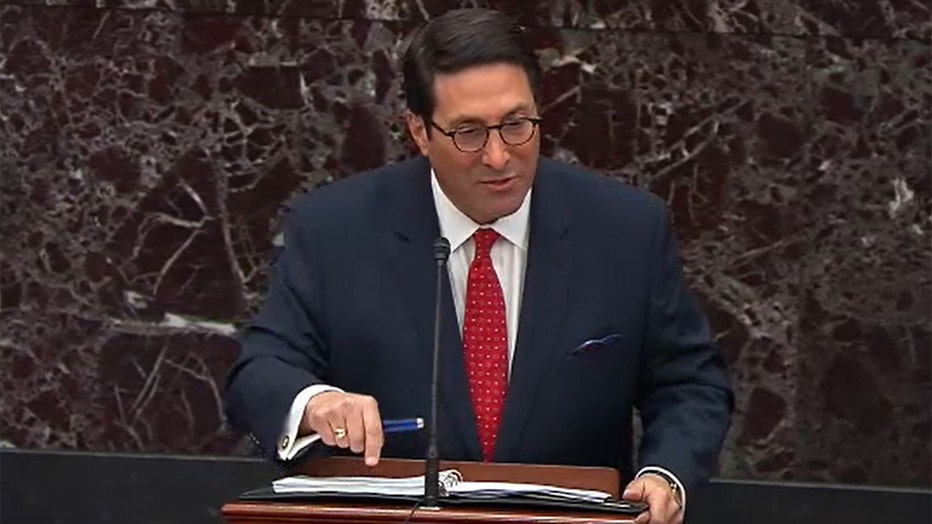 WASHINGTON, DC - JANUARY 21: In this screengrab taken from a Senate Television webcast, President Trump's personal lawyer Jay Sekulow speaks during impeachment proceedings against U.S. President Donald Trump in the Senate at the U.S. Capitol on Janua

THE FACTS: That's false. The House Judiciary Committee, which produced the articles of impeachment, invited Trump or his legal team to come. He declined.

Absent White House representation, the hearings proceeded as things in Congress routinely do: Time was split between Democratic and Republican lawmakers to ask questions and engage in the debate. Lawyers for Democrats and Republicans on the committee presented the case for and against the impeachment articles and members questioned witnesses, among them an academic called forward by Republicans.

The first round of hearings was by the House Intelligence Committee and resembled the investigative phase of criminal cases, conducted without the participation of the subject of the investigation. Trump cried foul then at the lack of representation, then rejected representation when the next committee offered it.

SEKULOW: “I remember in the Mueller report there were discussions about insurance policies. Insurance policy that didn’t work out so well, so then we moved to other investigations.”

THE FACTS: Sekulow is attempting to give weight to a 2016 text message between two FBI employees that Trump continually misrepresents. Trump depicts the two as referring to a plot — or insurance policy — to oust him from office if he won the election. It’s apparent from the text that it wasn’t that.

Agent Peter Strzok and lawyer Lisa Page, both now gone from the bureau, said the text he sent to her was about how aggressively the FBI should investigate Trump and his campaign when expectations at the time were that he would lose anyway.

Strzok texted about something Page had said to the FBI's deputy chief, to the effect that “there’s no way he gets elected.” But Strzok argued that the FBI should not assume Clinton would win: “I'm afraid we can't take that risk.” He likened the Trump investigation to “an insurance policy in the unlikely event you die before you're 40." He was not discussing a post-election cabal to drive Trump from office.