FORT HOOD, Texas - The family of Gregory Wedel-Morales, a former Fort Hood soldier missing for 10 months until his skeletal remains were discovered buried near the Texas Army base in June, are claiming he won't receive military honors at his funeral and are left with only questions pending further investigation into the case.

Wedel-Morales' family held a vigil in his honor in his hometown of Sapulpa, Okla., on Saturday.

His skeletal remains were found about a week before those of a different Fort Hood soldier were discovered.

Investigators looking into the death of Pfc. Vanessa Guillen, whose case has received more widespread media attention, believe she was bludgeoned to death at the base in April. 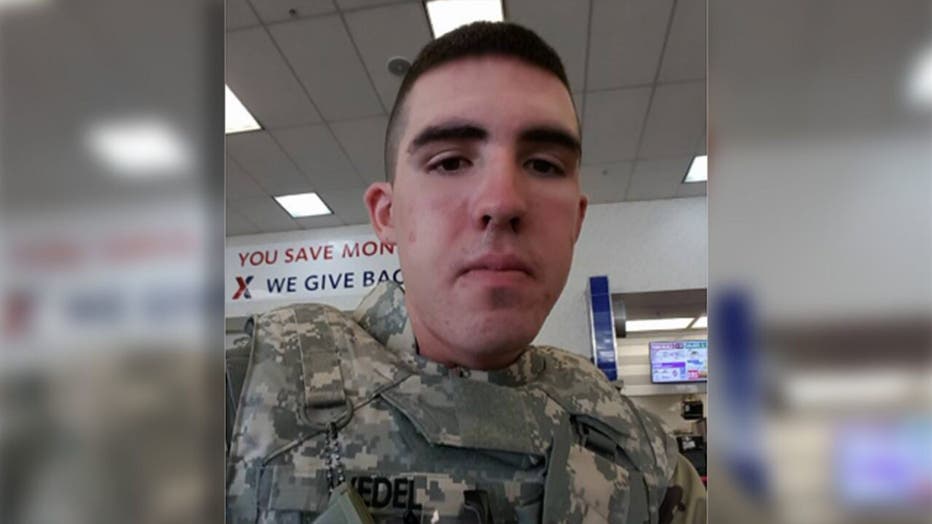 “I’ve tried to call somebody at least every day trying to get some information from them,” Wedel-Morales' brother, Nick Wedel, told KTUL Saturday. “They all say the same thing. We can’t give you any information or we have to wait until the investigation is over.”

“The military needs to be able to watch out for the people that are under them and that is something they weren’t able to do,”  Wedel said. “I feel like that’s something the community is trying to come together to do. Give him a voice since he doesn’t have one anymore.”

Wedel-Morales, 24, a native of Sapulpa, Okla., was last seen driving his personal vehicle outside of Fort Hood in Killeen on the night of Aug. 19, 2019. His last known contact was the following day. His unit placed him in an AWOL status and then declared him a deserter.

But his 2018 Black KIA Rio was recovered by authorities in January after his family saw on CARFAX that someone in the Dallas-area had tried to take it in for an inspection, Fox 7 Austin reported.

His skeletal remains were found in a field in Killeen, the town adjacent to Fort Hood, on June 19. The remains were identified using dental records and the Army has since said "foul play is suspected." An autopsy would be conducted to determine the cause of death.

A Change.org petition started by Abby Wimberley, Wedel-Morales’ cousin, has garnered more than 31,000 signatures by Sunday.

“We want Greg to be reinstated so he can have a military funeral as he deserves, and we also want them to look into who did this to him," Wimberley wrote. "We also want the Killeen and Fort Hood police department to be investigated for their lack of investigation skills over the years."

A separate GoFundMe page titled “PV2 Gregory Wedel remains to be returned home” claims that Wedel-Morales’ mother, Kim Wedel, was told by Fort Hood Command that her son’s remains would be returned to Sapulpa, but she would have to cover funeral costs herself.

“They also stated that no military honors are authorized and that his life insurance won't be paid until the autopsy shows that he was deceased for ten months because he was declared a deserter,” the page started by Gary Shafer said.

“It would have just been nice if they would have apologized at this point,” Kim Wedel told KTUL, referencing military officials at the base. “If it takes a bunch of people screaming and yelling and throwing signs around, then I thank them all.”

“I think he deserves it just as much as anybody else does,” Nick Wedel echoed, referencing a military burial. “The fact that they’re trying to take that away from him isn’t right.”

Wedel-Morales “was out processing from the Army and was scheduled to be discharged within a couple of days when he disappeared,” III Corps and Ford Hood said in a Facebook update on June 21.

“An autopsy is scheduled to determine the cause and manner of death,” the Army base said. “At this point, investigators have no credible information that this case is in any way connected to the search for Pfc. Vanessa Guillen who went missing from Fort Hood in April.”

Morales joined the Army in June 2015 as a motor transport operator and had been assigned to the 1st Sustainment Brigade, 1st Cavalry Division at Fort Hood since November 2016, according to the Army.

A $25,000 reward is being offered for information about his death.