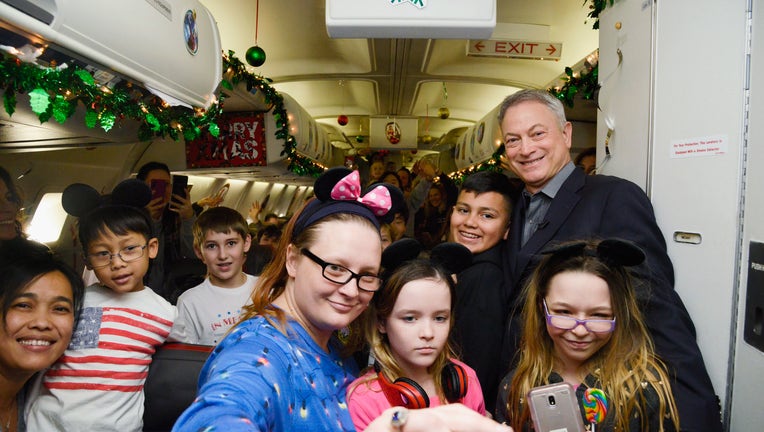 ORLANDO, Fla. - Children of fallen military service members are getting an early Christmas vacation to Walt Disney World thanks to actor Gary Sinise.

About 1,700 family members from across the country were flown to Orlando on Saturday aboard the 'Snowball Express' to enjoy a 5-day stay at Disney World.

Gary Sinise Foundation partners with American Airlines to donate the flights so families don't have to pay a penny.

"The holidays can be especially challenging for grieving families," the foundation said. "Each December, we host a five-day experience for 1,750+ children of the fallen and their surviving parent or guardian. As a therapeutic retreat with a blend of fun and inspiring programs, these families can lean on their peers for support."

Well aware of the "Forrest Gump" star's longtime support for veterans' and military families' causes, Snowball Express came to Sinise in spring 2007 and showed him a video of the event, Fox News reported. He signed up to support the December 2007 Snowball Express, in which they brought more children to Disneyland, and Sinise performed for them with his Lt. Dan Band. In 2011, he went on to found the Gary Sinise Foundation, into which Snowball Express eventually folded.

"They’re dealing with the grief and the loss of a loved one, a mom or a dad who have died in military service, and all these kids are going through the same thing, so the power of all of them in the same place at the same time, many of them — hundreds of them — was very healing for a lot of them," Sinise said.

Families participating are treated to a visit from Santa Claus and lots of other activities to make the experience one they will never forget.