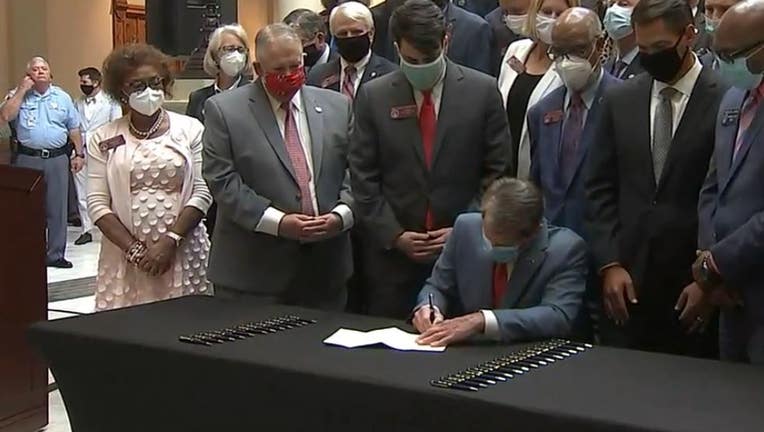 ATLANTA - Georgia has joined the list of states that have hate crime legislation on the books.

Before signing the bill, Kemp said that it “does not fix every problem or right every wrong. But this bipartisan legislation is a powerful step forward. It’s a sign of progress, and it’s a milestone worth applauding.”

State lawmakers acted with haste to pass the legislation, which had previously been stalled, following the killing of Ahmaud Arbery, as well as recent nationwide protests against racial injustice and police brutality. Arbery was a 25-year-old Black man pursued and fatally shot while running near Brunswick, Georgia, in February. Three white men, including a father and son, are charged with murder in his death.

The law will allow additional penalties to be imposed for certain crimes when motivated by a victim’s race, color, religion, national origin, sex, sexual orientation, gender or disability. It also mandates the collection and reporting of data on hate crimes investigated by law enforcement.

The Senate also added a requirement that law enforcement report suspected hate crimes to the Georgia Bureau of Investigation so the GBI can track where these crimes occur.

Georgia joins 46 other states and the District of Columbia which have statutes criminalizing various types of bias-motivated violence or intimidation.

The state's previous hate crime statute was struck down by the Georgia Supreme Court in 2004.

Arkansas, South Carolina, and Wyoming are now the only states in the U.S. without hate crime legislation.