The home run king was laid to rest Wednesday in southwest Atlanta following a funeral service at Friendship Baptist Church.

The 86-year-old Hall of Famer passed away in his sleep from natural causes on Friday, leaving behind not just a three-decade rule as the home run king on the field, but also a bevy of unseen and mostly unspoken about charity and civil rights work off.

Hank Aaron to be laid to rest after funeral service

The world will say its final goodbyes to Hank Aaron on Wednesday afternoon.

The funeral service followed a private memorial service at Truist Park Tuesday, where Atlanta Braves Manager Brian Snitker, who got his start in the dugout thanks to Aaron, delivered an emotional message.

"He always wanted to move a player up, and he preferred that it wasn’t the so-called bonus babies," said Snitker, choking back tears. "He wanted to get that grinder guy, the guy who was overachieving."

"The reason I’m here today is because of Hank Aaron," Snitker said, pausing to maintain his composure.

Atlanta Braves Manager Brian Snitker recalls his own personal story with Hank Aaron during a memorial service at Truist Park.

Snitker toiled in minor league obscurity through most of his coaching and managing career before finally getting the call to become Braves skipper at age 60. Since then, he has guided the team to three straight NL East titles, earning NL Manager of the Year

"I’ll miss the times he used to stop by, come by my office and we could just sit and talk," Snitker said. "I’ll miss the friend and the mentor that I had in my life."

The remarks were delivered at the Braves' Monument Garden, which prominently features a statue of Aaron delivering the swing that produced 755 homers.

MLB commissioner on the impact of Hank Aaron

MLB commissioner Rob Manfred recalls his personal friendship with the late Hank Aaron and the impact the baseball legend had on his life and career.

Aaron’s famed No. 44 was painted in the dormant grass of center field. Braves Chairman Terry McGuirk noted the unseasonably warm January weather — the temperature climbed into the upper 60s — as a sign from above honoring one of the game’s greatest icons.

Noting the 10 Baseball of Famers who have died in the past year, Manfred said Aaron "belongs on our sport’s Mount Rushmore. He stood — on and off the field — above all others."

The Braves plan to honor Aaron during the upcoming season. McGuirk announced the first of those initiatives: a $1 million donation to establish the Henry Louis Aaron Fund, which will work to increase minority participation among players, managers, coaches and front-office personnel. 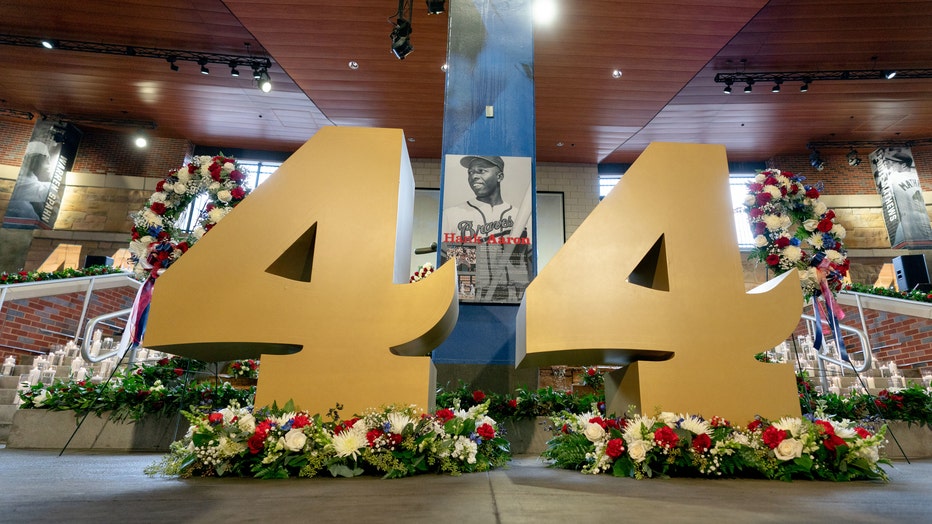 Decorations for "A Celebration of Henry Louis Aaron," a memorial service celebrating the life and enduring legacy of the late Hall of Famer and American icon. (Photo by Kevin D. Liles/Atlanta Braves)

That was an issue that Aaron took a keen issue in throughout his life. He often criticized the lack of Black managers and general managers in Major League Baseball. He fretted fewer African-Americans were playing the game.

The Braves donation will be matched by $500,000 apiece from both MLB and the players’ association.

Following the service, Aaron's body will be driven by the 715 Wall where Atlanta Fulton County Stadium once stood, then past the former Turner Field, where his statue still stands.

He will be buried at historic South-View Cemetery, the city’s oldest Black cemetery, where he will be interred alongside civil rights leaders such as John Lewis, Julian Bond and Martin Luther King Sr.

FOX 5 Sports director Ken Rodriguez remembers Braves legend Hank Aaron and how he even the most seasoned of sports reporters can let their inner fan out. That's what happened when KRod covered Aaron's 70th birthday, a story worth remembering.

Aaron is survived by his wife, Billye, and their daughter, Ceci. He also had four children from his first marriage to Barbara Lucas — Gail, Hank Jr., Lary, and Dorinda.