Dramatic footage from a house fire in Plainfield Township on the west side of Michigan shows a firefighter approaching flames in a garage when a massive explosion is caught on camera. Credit: Patrick DuVall via Storyful

PLAINVIEW TWP., Mich. - A firefighter approaching a blaze in the garage of a West Michigan home was sent running in the opposite direction after a propane tank ignited.

The ensuing blast was caught on camera, showing the emergency responder staggering backward and a massive explosion from the home.

The footage, released by the Plainfield Township Fire Department district chief on Monday, showed the flames traveling from the garage to the rest of the home after firefighters arrived.

The house fire occurred in a neighborhood just north of Grand Rapids in Kent County.

First reported by WOOD TV, the family that lived at the residence had evacuated the home before the explosion.

The homeowner credited a passing newspaper delivery man with alerting the family to the fire, allowing them to escape before the fire spread. 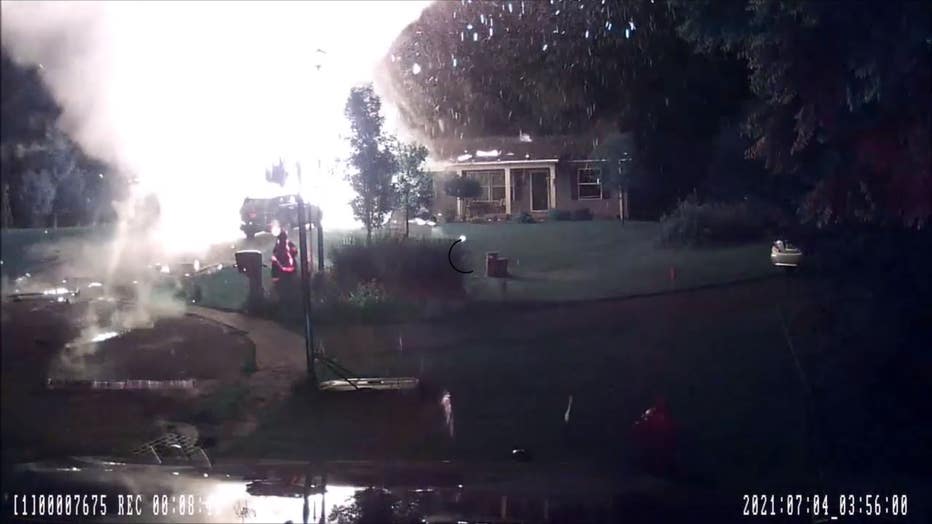 That wasn't the only explosion to rock a local Michigan neighborhood during the 4th of July weekend. Later on Sunday, neighbors in a Warren subdivision were hit with debris after a blast leveled a home.