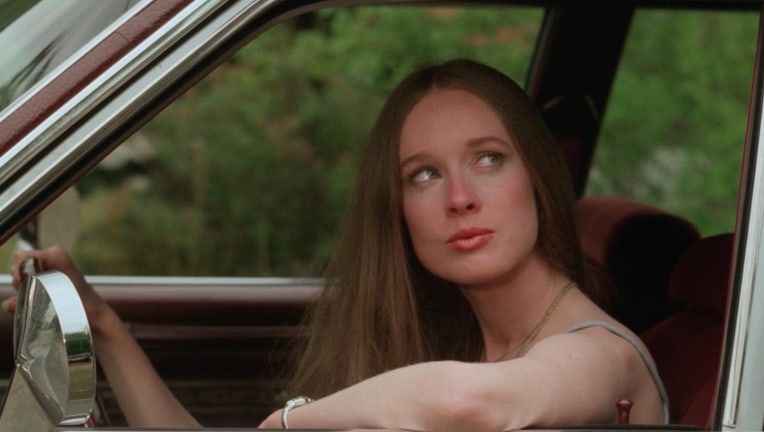 Camille Keaton in "I Spit on Your Grave," now streaming for free on Tubi.

This month we’re spotlighting some of the best horror films Tubi has to offer in celebration of Terror on Tubi, a collection of 5,000 hours of spooky season programming. Today’s scare: the enduring relevance (and controversy) of "I Spit on Your Grave."

This story includes mentions of brutal sexual violence as depicted on film.

"There are certain rules that one must abide by in order to successfully survive a horror movie," film buff Randy (Jamie Kennedy) famously explains in the first "Scream," which celebrates its 25th anniversary this year. He has paused "Halloween" on the TV at a party to give the room a rundown as to why Jamie Lee Curtis as Laurie Strode is primed to outlast her spirited BFFs in the John Carpenter classic. Sex, booze and drugs are a gateway to death because of the "sin factor," Randy tells his drunk pals, who deliver a chorus of boos in his direction. "Never, ever, ever under any circumstances say, ‘I'll be right back.' Because you won't be back," he adds to complete this lesson.

There is no one more equipped to make it to the end credits of a horror film than the Final Girl. While her rebellious friends get picked off one by one, she is destined to make it out of this nightmare thanks to her wits and tenacity — and some good luck. "Final Girl" is not a term Randy uses, but Laurie is perhaps the most famous example of this horror archetype. Nancy Thompson (the "Nightmare on Elm Street" franchise), Sidney Prescott (the protagonist in "Scream") and Ripley (the "Alien" films) are also often cited when discussing legendary Final Girls. Sigourney Weaver’s unforgettable Ripley in the "Alien" franchise doesn’t quite fit the slasher subgenre parameters, but tropes are meant to be bent or broken.

Case in point: Camille Keaton’s Jennifer Hills of "I Spit on Your Grave," one of the great Final Girls of film history — and one that’s often overlooked. Like Ripley, Jennifer doesn’t quite fit the typical checklist of those hunted by the likes of Michael Myers, Freddy Krueger, and the person (or people) wearing the Ghostface disguise. You may not know the character’s name, but odds are you’re familiar with the controversial movie in which she appears.

WATCH: "Growing Up With I Spit On Your Grave"

Since it first hit screens in 1978, "I Spit on Your Grave" has been met with fierce criticism regarding its depiction of rape and revenge. Originally titled "Day of the Woman," the low-budget venture was inspired by writer-director Meir Zarchi’s experience of witnessing a rape victim trying to report the crime to an indifferent police officer. Zarchi recounts the story in the documentary "Growing Up With I Spit on Your Grave," which also explores the diametrically opposing opinions regarding its portrayal of multiple brutal sexual assaults and the revenge Jennifer enacts on the four men who attacked her.

"I Spit on Your Grave": Exploitation or Empowerment?

Over the last 40-plus years, words like "exploitation" and "empowering" have both been leveled at the graphic violence depicted over the course of "I Spit on Your Grave." The story itself is a familiar one: Jennifer (Keaton) is a New York City-based author who travels to a cabin in the middle of nowhere to finish her first novel. What should be a summer of productivity and procrastination quickly spirals into a nightmare.

The repercussions of that act of horrific violence have made this a much-discussed entry in the horror annals — even by those who have never seen it.

Spoiler alert: plot details for "I Spit on Your Grave" follow. If you want to watch it first, click here and we’ll see you in 101 minutes.

When Jennifer stops at a gas station, her outsider status is quickly noted (as is the address of her summer residence) by the station’s attendant and his two friends. Later, these local men and another pal quickly escalate from harassment to multiple rapes — first in the woods and then in her rental home. In the film’s second half, the power dynamics shift dramatically, as Jennifer picks off each man one by one.

Related: Terror on Tubi countdown: Dive into the depths of 'The Descent'

In the years that followed its ban in countries like the U.K. (it was branded a "video nasty"), "I Spit on Your Grave" has been elevated to cult status while also leading to sequels and remakes (including Steven R. Monroe’s 2010 version). Many words have been dedicated to this film, including critic Roger Ebert famously calling it "a vile piece of garbage," but it is Carol J. Clover’s seminal text "Men, Women, and Chain Saws: Gender in the Modern Horror Film'' that offers a more measured and deeper exploration of Jennifer’s journey and the audience reaction.

Clover introduced a term in this book that is now part of the pop culture lexicon when discussing this particular horror archetype. "The image of the distressed female most likely to linger in memory is the image of the one who did not die: the survivor, or Final Girl," she wrote in 1992. Describing this character as "abject terror personified," she focuses on slashers like "Halloween" and "The Texas Chain Saw Massacre."

But in the chapter "Getting Even," Clover examines "I Spit on Your Grave" at length, positioning Jennifer as the "self-avenging rape survivor" as opposed to the "self-saving Final Girl." But while their circumstances are different — for starters, Jennifer has no companions to get picked off one by one — the role of victim-hero (another term Clover uses) can be applied to Jennifer Hills as much as Laurie Strode or the more recent incarnation, Sidney Prescott — soon to be returning for another round of "Scream."

Similar to Laurie and Sidney in their films, it is Jennifer whose arc we witness in its entirety in "I Spit on Your Grave." She is our point of entry, and we follow her as she leaves the so-called dangerous city to the seemingly tranquil Connecticut wilderness. Her outsider status is used as a weapon against her when the men discuss the rampant sex lives of New York City "broads."

They judge her fashionable floaty summer dresses, jean shorts and string bikini as an "invitation," with Johnny going so far as to tell Jennifer that her clothing was to blame for their actions (that old chestnut). After her attack, she dons black jeans, a turtleneck, oversized sunglasses and a headscarf while she hatches a plan and pre-emptively asks for forgiveness from God in a local church.

No matter the era (or budget), the Final Girl signature style rarely strays outside the most ubiquitous of garments like jeans, tanks, T-shirts, and sweaters. Jennifer’s costumes take on a somewhat more symbolic sartorial direction — she wears ethereal white during two of the kills — but the girl-next-door aesthetic is on hand when she lures Johnny. The 2010 remake leans into the Final Girl clothing starter kit, even if the contemporary version of Jennifer (Sarah Butler) fits in a world deeply influenced by "Hostel" and "Saw."

And in both cases, the surprisingly sensual promotional imagery of a superficially injured and barely clothed Jennifer doesn’t resemble anything in her closet.

In fact, it isn’t Camille Keaton on the original "I Spit on Your Grave" poster but a pre-fame Demi Moore, which the actress confirmed in her 2019 memoir. The title change and subsequent poster image directly resulted from Zarchi’s struggle to find a domestic distributor for the then-titled "Day of the Woman." When he did land on a deal (with the Jerry Gross Organization), it was under the stipulation that the title and marketing could be altered, which explains why this tattered costume is absent in the actual movie. This design choice also adds an element of titillation that is thankfully absent from Zarchi’s film.

After four decades of debating the merits of "I Spit on Your Grave," it is still a polarizing horror title. It’s considered by some a disgusting exploitation movie. Others see an all-time great feminist vengeance film, and many others find themselves oscillating between the two extremes. While it is unlikely a consensus will ever be met on that front, one element that is hard to dispute is Jennifer’s position in the pantheon of great horror women. She might be the only girl attacked, but she has still earned the Final Girl title.

About the writer: Emma Fraser is a freelance culture writer with a focus on TV, movies, and costume design. You can find her talking about all of these things on Twitter.

Dive into the "Grave" universe

Growing Up With I Spit on Your Grave (2019): This doc about "the controversial horror film that shocked and divided audiences around the world" includes interviews with the cast and previously unseen footage. 102 minutes. Rated TV-MA. Dir: Terry Zarchi.