Dozens of vehicles in pileup on Illinois interstate amid heavy snowfall

The Illinois State Police closed southbound I-39 due to a multi-vehicle pile-up near El Paso, Illinois, on Feb. 17, 2022. Credit: Becky Van Hoveln via Storyful

EL PASO, Ill. - An Illinois pileup involving over 100 vehicles was reported Thursday night amid a severe winter storm, shutting down a 30-mile stretch of the highway for hours.

Interstate 39 was closed through Friday between Normal to Minonk due to the pileup, the Illinois Department of Transportation said. Both directions eventually reopened nearly 24 hours later.

Normal, Illinois is part of the Bloomington metropolitan area and is located about 130 miles southwest of Chicago. Minonk is about 29 miles north of Normal. 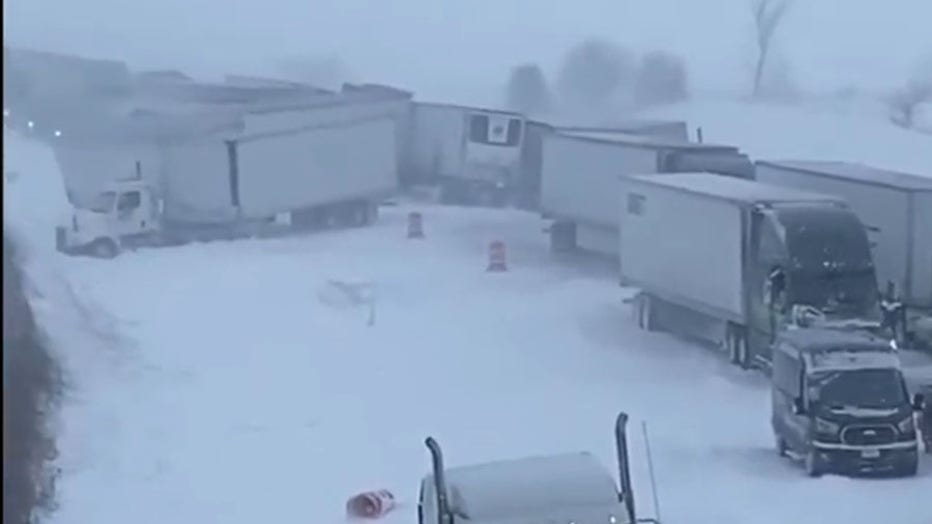 A screengrab from a video shows the scene of the crash along southbound Interstate 39 near El Paso, Illinois, on Feb. 17, 2022, amid a severe winter storm in the area. Credit: Becky Van Hoveln via Storyful

Heavy snow fell across central Illinois on Thursday with Normal receiving 9.5 inches of snow, according to FOX Weather. Meteorologists warned of gusty winds and heavy snow that could create dangerous travel conditions.

The Illinois State Police urged drivers to avoid traveling on the roadways unless absolutely necessary. It said Thursday night that the ISP was working with local partners to "ensure motorists are safely escorted from the area to warming centers,"

The winter storm that produced several inches of snow was also blamed for other crashes across the state, including another pileup on Interstate 55 southbound.

"The highway is a sheet of ice," storm chaser Simon Brewer told FOX Weather. "The winds here in this area are so high they are just pushing trucks off the highway."

Brewer counted 50 smashed tractor-trailers and cars just in Towanda. "And the vehicles go on for as far as the eye can see in both directions," Brewer said.

As of Thursday evening, 8.3 inches of snow fell on Towanda.

The Illinois Department of Transportation said Thursday night that multiple crashes were also blocking all lanes of southbound I-57 at milepost 243, about 6 miles north of Champaign.