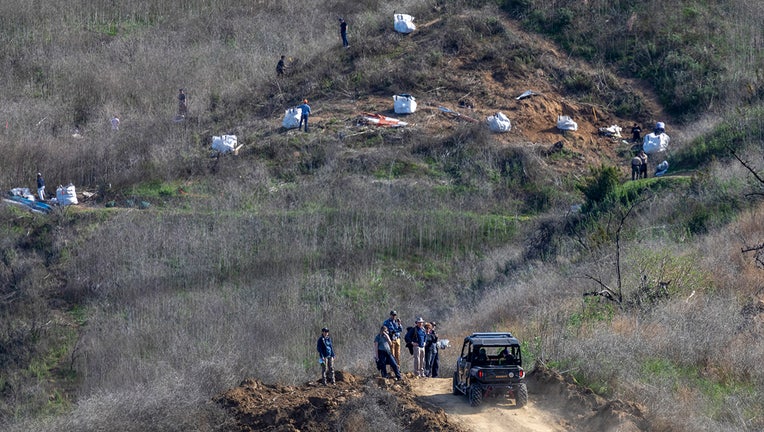 Investigators work at the scene of the helicopter crash, where former NBA star Kobe Bryant and his 13-year-old daughter Gianna died, on January 28, 2020 in Calabasas, California. (David McNew/Getty Images)

LOS ANGELES - Legislation introduced Thursday in the House and Senate would require terrain awareness, warning systems, crash-resistant flight data and voice recorders on all helicopters that carry six or more passengers, which the bills' authors say would prevent tragedies like the Jan. 26 Calabasas crash that killed Kobe Bryant and his daughter.

"Despite NTSB recommendations 15 years ago that the FAA make terrain awareness equipment and other safety technology mandatory on all helicopters, some of this lifesaving equipment is only required to be installed in air ambulances. That's simply unacceptable," said Sen. Dianne Feinstein, D-Calif.

"We saw the deadly results of this inaction in January when a helicopter carrying Kobe Bryant, his daughter and seven others crashed," she said. "If that helicopter had terrain awareness equipment, the tragedy may have been averted. This commonsense bill will save lives, and Congress should act to pass it immediately."

Feinstein introduced the Helicopter Safety Act in the Senate and Rep. Brad Sherman, D-Sherman Oaks, introduced a companion bill in the House.

Sherman said the legislation would "finally direct the FAA to require these safety features for passenger helicopters in order to avoid tragedies like the one that claimed the life of Kobe Bryant, his daughter Gianna Bryant and seven others."

"The death of Kobe Bryant, his daughter and seven others was devastating news for Los Angeles and the entire country," Harris said. "It is critical that helicopters be required to have terrain awareness equipment and warning systems in place. I am proud to join my colleagues in introducing this legislation to prevent accidents like this from occurring again."

Bryant, his 13-year-old daughter Gianna and several of her teammates and their parents were in a Sikorsky S-76B helicopter that was en route from John Wayne Airport in Orange County to a basketball tournament at the former NBA star's Mamba Sports Academy in Thousand Oaks when it hit the foothills of the Santa Monica mountains in Calabasas and caught fire, killing everyone on board.

A preliminary report from the National Transportation Safety Board found that the helicopter was flying in foggy weather and was not equipped with terrain awareness technology.

Bryant's widow and family members of other crash victims have filed lawsuits against the companies that owned and operated the aircraft and the estate of the pilot, alleging the defendants were negligent in the operation and maintenance of the chopper.

Since 2006, the NTSB has recommended that all helicopters be equipped with terrain awareness technology, but so far the Federal Aviation Administration has only applied the requirement to air ambulances.

Earlier this year, Feinstein asked the FAA to expand current regulations on terrain awareness equipment to include all helicopters with six or more passengers.