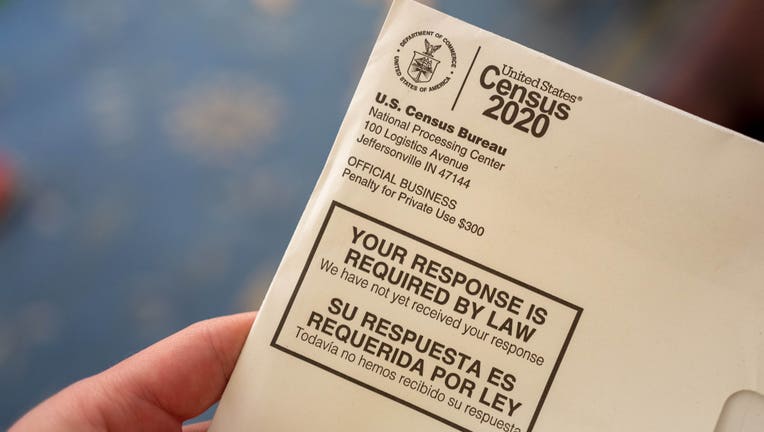 A file image taken April 24, 2020 shows a letter from the U.S. Census Bureau regarding the 2020 Census. (Photo by Smith Collection/Gado/Getty Images)

PHOENIX - Betsy Landin was listed by her parents on the 2020 census as living at her family's home in Phoenix when she really should have been counted in the college town of Tempe, where she studies finance at Arizona State University.

Also missing from Tempe's tally was Arizona State political science major Betzabel Ayala, whose mother counted her on the family's census form in Phoenix because she was living at home after coronavirus lockdowns led to a nationwide exodus from college towns last spring.

In yet another example of the widespread disruption caused by the global outbreak, hundreds of thousands of U.S. college students who normally live off campus in non-university housing are being counted for the 2020 census at their parents' homes or other locations when they were supposed to be counted where they go to school.

“We really didn’t have any instruction or guidance at school about how to fill out the census,” Landin said.

No easy solution has presented itself. The Census Bureau sought the help of college administrators in getting rosters for off-campus students who left town, but only half of the schools cooperated. Many universities were reluctant to participate because of privacy concerns and because off-campus students at many schools are not obligated to provide information about where they live.

And a significant chunk of the information provided by the schools is missing important information, such as birthdates, according to a report last month by the bureau's watchdog agency.

From Tempe to places like Bloomington, Indiana, and Gainesville, Florida, the looming undercount could harm college towns across the country. In some places with major universities, students make up as much as three-quarters of the population.

“The potential undercount of students during this pandemic will have negative financial impacts for the city for years,” said Ken Jones, Tempe's deputy city manager and chief financial officer.

The timing for counting off-campus students couldn’t have been worse: Not long after the 2020 census began for most people in March, much of the U.S. went into lockdown to stop the spread of the coronavirus, and many schools switched to online classes, leading to an exodus from college towns.

The Census Bureau says college students should be counted where they would have been on April 1 — at school — if not for the outbreak.

Still, off-campus students make up about 4 million of the 19 million college students in the U.S., according to Dudley Poston, a demographer at Texas A&M University.

“College students overwhelm the demography of places with large universities,” Poston said. “This could be a costly setback for university towns."

In State College, Pennsylvania, home to Penn State University, the percentage of students who answered the 2020 census either online, by mail or by phone in a downtown neighborhood populated with apartments for thousands of off-campus students was 25%, compared with 60% during the 2010 census, said Douglas Shontz, a city spokesman.

With less than a month left until the census ends, the city has placed signs and banners all over downtown State College, encouraging students to answer the questionnaire that helps determine the distribution of $1.5 trillion in federal spending and how many congressional seats each state gets.

The city also spent $5,000 mailing out postcard reminders about the census to students who returned for the fall semester to off-campus apartments or fraternity and sorority houses.

“We are kind of begging at this point for students to do the right thing," Shontz said.

In Athens, Ohio, home to Ohio University, the mayor estimates each student missed accounts for at least $1,400 a year in lost funding for the community. If last spring's graduating class of 3,500 students isn't counted, that could translate into $49 million in lost federal funding over the decade, said Mayor Steve Patterson.

The question of where to count off-campus college students in any once-a-decade census can be confusing enough, with parents often incorrectly thinking their college-age children should be tallied with them when they should be counted where the students do most of their sleeping.

After college students began moving back home because of the outbreak, the Census Bureau had to shelve plans to send door-knockers to neighborhoods around campuses starting in April.

Now that the disruption has extended into the fall, hopes of finding and counting students before the census is completed have dwindled further. Some college towns are considering drastic measures, like asking for another count of their communities, but the cities would have to foot the bill for a “special census,” which could cost hundreds of thousands of dollars.

Ames, Iowa, home to Iowa State University, has 67,000 residents. Officials are worried that if the 2020 census misses the more than 15,000 students who live off-campus, it could put the city's population count below 50,000.

Dipping below that threshold would cost Ames millions of dollars in federal funding annually for low-to-middle-income housing and transportation projects, making a special census more appealing, said Gloria Betcher, a professor who sits on the city council.

“From our perspective, this is like watching an accident in the long term,” Betcher said. “We are watching these cars approaching each other and seeing that they’re going to crash. It’s not surprising to us, but it is surprising that nothing is being done to stop the accident.”