From the beginning Jeff Dabe's life story is a tale of epic proportions, leading him to become an arm wrestling champion.

(FOX 9) - In the corner of a farm in Stacy, Minnesota there's a shrine to Jeff Dabe's part-time passion.

"My favorite is this one and the belt I won from Canada, but ended up losing – that was a good belt too," Dabe told FOX 9’s Maury Glover.

But you don't have to twist his arm to see Dabe is a big deal.

"It's kind of cool, kind of fun. I never really worried about the titles before – it was just fun to do, but to have it and say I have a world title is kind of nice," Dabe said.

Several times a week Dabe trains at his practice table to strengthen his left arm. Not that his forearm needs to get any bigger – it already measures 20 inches in circumference, which comes in handy for his hobby: arm wrestling.

"I like the one-on-one. When you win, it’s on you. When you lose, it's on you too. You get that adrenaline, pumped up feeling, nervousness. Everyone has their thing – I like arm wrestling, I suppose," Dabe admits. 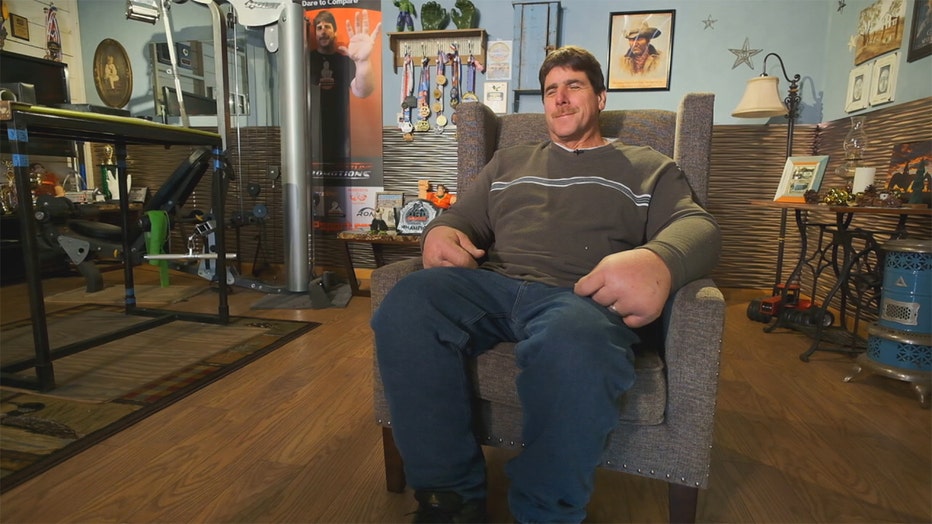 From the beginning Dabe's life story is a tale of epic proportions. He was born with over-sized limbs, and he used his natural assets to help out on his family's farm.

By the time he was in high school, he started wrestling and fans gave him the nickname "Popeye."

But it wasn't until his senior year when his coaches took the team to a local charity benefit that Dabe took part in, and won, his first arm wrestling tournament.

"I beat all the kids and then all the adults, and I kind of got hooked on it… Talked me into going to all the tournaments," said Dabe.

For the next few years Dabe had a firm grip on the local arm wrestling scene – until an injury to his right elbow forced him to put his ambitions on hold.

He picked it up again about 10 years ago after he entered an arm wrestling tournament at a local bar, but now he uses his left arm.

"I wasn't sure about getting back into it at 48 [years old]. They ended up talking me into competing. I ended up winning and beating the guy who had the Minnesota title, so I was drawn right back into it," Dabe said.

Last fall he became a world champion after winning at the International Federation of Arm Wrestling's Grandmaster Tournament in Florida. 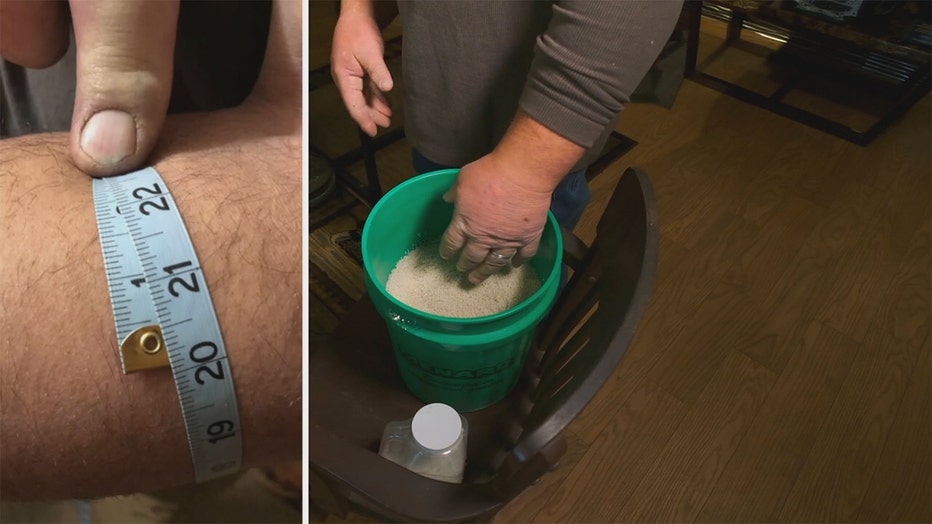 Jeff Dabe's arm measurements far exceed the average persons, but he insists it's just a part of who he is.

Dabe says people usually have an extreme reaction to his huge hands, which dwarf just about everything else they come into contact with. His wedding ring is a stunning 5 inches around, and he can hold a basketball in each hand.

"Some are kind of amazed, shocked. But the people who know me for a while, they think oh, it’s just Jeff," he said.

Medical experts have no idea why Dabe's arms are so big. Doctors at the U of M even ran tests to see if he was born with gigantism or elephantitis, but Dabe says they didn't find any disease or abnormalities.

"I can do everything just fine like everyone else. There's no way I can work on cars. I used to work on cars on the side – I liked to do it, it was relaxing to me," Dabe said. "Other than that I haven't found much I can't do… The one thing I can't do is find good gloves."

Even though his nickname is Popeye, Dabe says he often gets compared to a more recent animated character – Wreck It Ralph.

And for everything he's accomplished, you have to give this gentle giant a hand.