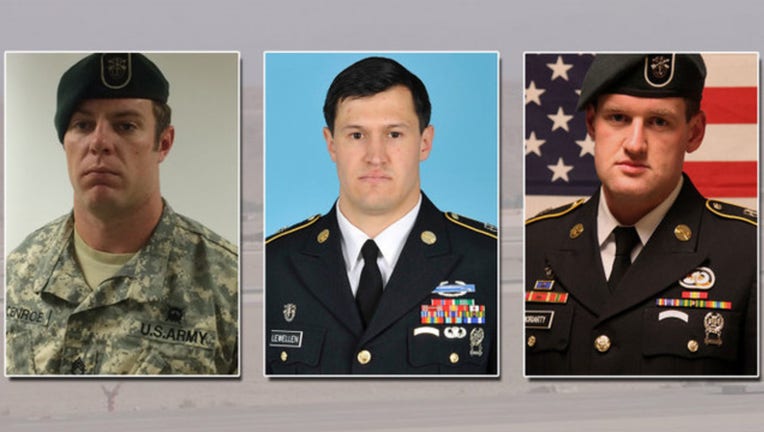 AMMAN, Jordan (AP) - A military court convicted a Jordanian soldier Monday of killing three U.S. military trainers at a Jordanian air base and sentenced him to life in prison with hard labor.

The defendant, who had pleaded "not guilty," has said he opened fire because he feared the base was coming under attack.

As he was led out of the courtroom, 1st Sgt. Marik al-Tuwayha said: "I have all the respect for the king, but I was doing my job."

Relatives of two of the slain soldiers sat quietly as the judge announced his ruling to a crowded court.

Charles Lewellen, one of the bereaved fathers, later told The Associated Press that the verdict "won't take the pain away," but that it proved "what we have been saying all along ... that he murdered our sons."

Some of the relatives criticized Jordan's handling of the case and called for the death penalty, saying the maximum sentence in this case, life in prison, was not enough.

The three U.S. Army Green Berets were killed Nov. 4, as their convoy waited at the gate to the al-Jafr base in southern Jordan. Jordan initially said the Americans triggered the shooting by disobeying entry rules, a claim that was later withdrawn.

The trial "confirmed that the deceased U.S. service members followed all established procedures when accessing the base the day of the incident, as we have noted before," the U.S. Embassy in Jordan said in a statement. "We are reassured to see the perpetrator brought to justice."

Jordan is a member of a U.S.-led military coalition against Islamic State group extremists in neighboring Syria and Iraq. Jordan hosts troops, including trainers, from the U.S. and other countries as part of the anti-IS battle.

The military court judge, Col. Mohammed al-Afeef, said at the start of the trial that the defendant had no known ties to militant groups.

This left questions about a possible motive.

The defendant and some of the gate guards testified that they heard what might have been a pistol shot coming from the direction of the U.S. convoy. The defendant said he opened fire because he feared the base was coming under attack. Other guards said they held their fire because they couldn't determine the source of the sound.

The defendant has said he had "no intention of killing anyone" and felt no resentment toward Americans.

However, security camera footage of the incident, as described by the bereaved relatives, shows the shooting lasted for six minutes.

They have said the video shows the defendant reloading and shooting at Americans who were waving their hands and yelling: "We're Americans! We're friendly."

The video was shown to the family by U.S. law enforcement, but has not been released to the public.

Some of the relatives have questioned why the video was not screened during the trial and why the court did not ask a surviving U.S. soldier to testify, despite what they said was his willingness to do so.

Moriarty's father, Jim, wrote in a letter Monday to the Jordanian Embassy in the U.S. that the "successful prosecution" was a "good first step, but it is only the first step."

In the letter given to The AP, Moriarty, a Houston lawyer, listed several demands to Jordan. This included allowing the defendant to be re-interviewed by the FBI about his motive and releasing the security camera footage to the families. Moriarty said the video had been entered into evidence at the trial.

In Jordan, life in prison can mean 20 years, with time off for good behavior.

Earlier this year, a Jordanian soldier who killed seven Israeli schoolgirls in a 1997 shooting rampage was released after 20 years.