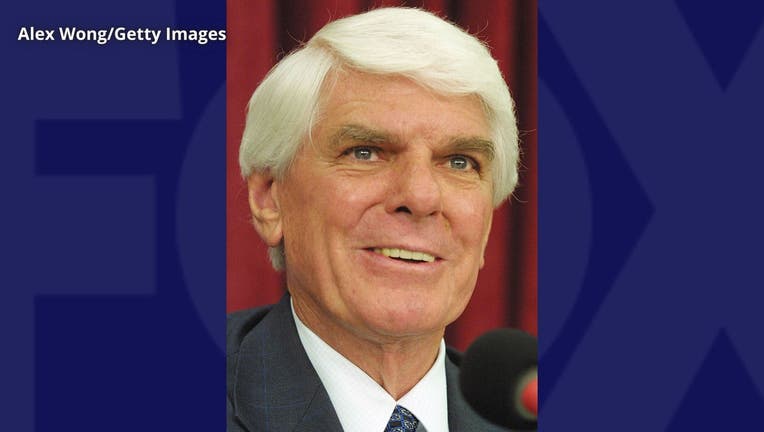 REDLANDS, Calif. (AP) — Former Republican Rep. Jerry Lewis, who became a hero in his community for steering hundreds of millions of federal dollars to projects in his inland Southern California district, but was criticized as an exemplar of pork-barrel spending abuses, has died. He was 86.

His death was announced in a statement by California Republican Rep. Ken Calvert, who said on his website that Lewis "made an enormous impact on his district, the state of California and our nation."

Calvert said that "if Jerry was ever criticized, it was for delivering too much and too often for his district. Our country would be a far better place if all of our public servants worked as tirelessly and effectively for the people they represented as Jerry Lewis did."

Over nearly half a century, Lewis rose from a local school board to become one of the most powerful figures on Capitol Hill, heading the House Appropriations Committee. He announced his retirement in 2012.

San Bernardino County Supervisor Dawn Rowe tweeted that Lewis "will be remembered as one of the most influential lawmakers in the history of our region."

Claremont McKenna College political scientist Jack Pitney, who worked for Lewis in the mid-1980s, tweeted that he "embodied civility and bipartisanship."

"He wanted to get stuff done. He wanted to make laws, not just (political) points," Pitney said in an interview.

Heading the powerful House spending committee from 2005 to 2007, Lewis funneled federal dollars to his favored projects through so-called earmarks, which are spending orders slipped into legislation. His district included portions of San Bernardino and Riverside counties, east of Los Angeles.

Those earmarks helped pay for the creation of a cancer research center at Loma Linda University Medical Center, the Seven Oaks Dam and a massive tree-clearing effort in the San Bernardino National Forest credited with reducing the region’s wildfire danger, the Press-Enterprise in Riverside, California, reported in 2012.

In fiscal year 2010 alone, he secured nearly $100 million for his district and consistently ranked as one of the country’s leading earmark earners.

But his activities also attracted federal scrutiny. The Justice Department investigated whether Lewis improperly steered federal projects to clients of friends and a former colleague, but it closed its investigation in 2010 without taking any further action. Lewis denied wrongdoing.

Lewis had hoped the DOJ’s decision would help him hold the chairmanship of the Appropriations Committee when Republicans retained control of the House, but he lost that bid.

He was a frequent target of the Washington, D.C.-based nonprofit Citizens for Responsibility and Ethics, a government watchdog group that claimed he improperly steered federal dollars to campaign donors.

First elected to the House in 1978, Lewis served in the California Assembly prior to winning a seat in Congress.