LVMH said in a statement Monday it will take over the 182-year old Tiffany and its 300 boutiques worldwide at $135 a share. The price tag is higher than the $14.5 billion cash offer LVMH made last month.

Tiffany, known for its delicate jewelry, distinctive blue boxes and an Audrey Hepburn movie, says the deal will ensure its long-term sustainability. The company is trying to transform its brand to appeal to younger and more digital shoppers, and could use an owner with deep pockets to help expand its business.

Shares in Tiffany rose more than 6% in midday trading in New York, while LVMH was up 2% in Paris. 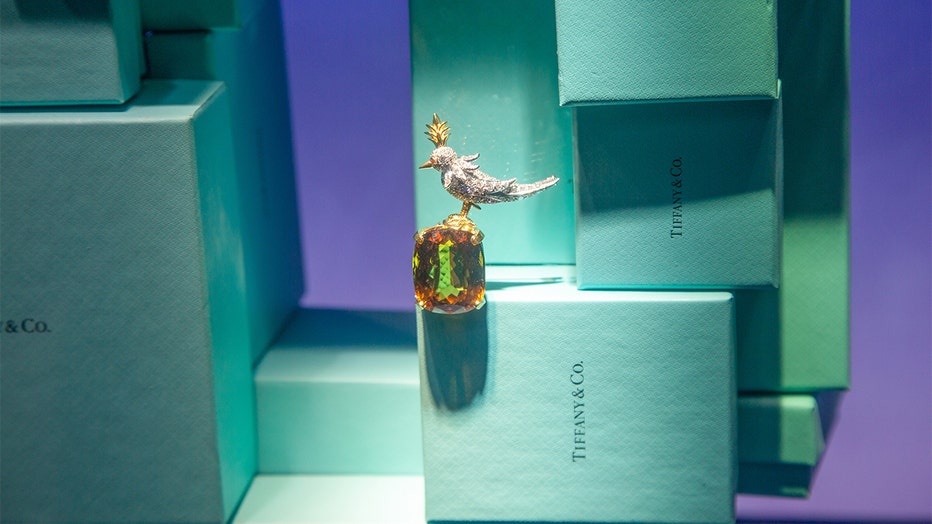 FILE: Tiffany & Co. or Tiffany's flagship store at the 5th Ave in New York City, United States of America. Tiffany's is an American luxury jewelry brand. The historical building and Tiffany's logo are famous and worldwide known from the iconic mo

LVMH, led by billionaire Bernard Arnault, says the deal will strengthen its position in high-end jewelry and in the U.S. market. The purchase will help the French conglomerate compete with Gucci-owner Kering Group and Cartier-owner Richemont SA. With its purchase of Tiffany, LVMH is also making a big bet on China’s economy— Tiffany has been expanding its presence in China with plans to build more stores there.

LVMH said both companies' boards approved the deal and hope to finalize the takeover in 2020, subject to the approval of regulators and Tiffany shareholders.

LVMH “knows how to preserve the strength and the identity of its brands, which is very important because in the luxury sector, beyond the product itself, the image is important,” said Aude Latouche, a Paris-based corporate mergers and acquisitions analyst at AL Corporate Advice. “So to be where they are now, LVMH definitely knows not only how to buy a brand, but also how to make it grow and flourish without touching the heart and the strength of the brand.”

Tiffany is less of a household name in Europe than it is in the U.S., but enjoys a high-visibility boutique on the Champs-Elysees Avenue — just down the street from Louis Vuitton’s flagship store.

In Paris, Arnault is seen as the unelected president of the luxury world. One of Europe’s richest men, he’s ever-present at VIP events — and especially during the city’s Fashion Weeks, where LVMH brands hold a prominent place, and he and his children Delphine and Antoine are often parked in the front row. The Tiffany purchase is seen as confirming his status as the man to beat in the industry, and further distanced LVMH from its rivals.

The offer comes as luxury goods companies have been wrestling with changing habits of shoppers who are increasingly buying online. They're also purchasing secondhand luxury items from places like The RealReal.com.

In addition, luxury companies are facing fears of an economic slowdown in China, a key area of business, while they're already dealing with a slowdown in international tourism in the U.S.

Overall, the global market for personal luxury goods is healthy, reaching a record high of $286.53 (260 billion euros) in 2018 — a 6% increase from the year before, according to consulting firm Bain & Co. Jewelry in particular has been one of the top luxury growth categories, enjoying 7% sales increase to a little over $20 billion last year. Luxury sales in the Americas reached $88 billion (80 billion euro) last year, a growth rate of 5%, according to Bain & Co.

The U.S. luxury market has been helped by a strong economy and overall luxury spending by local consumers. However, a strong dollar has curbed spending by tourists from Asia and other countries.

Overall U.S. luxury sales, excluding jewelry, have fallen 2.7% so far this year compared to a 3.1% increase in overall retail sales, according to MasterCard SpendingPulse, which tracks sales across all types of payments including cash and checks. Jewelry sales, however, have risen 2.6% so far this year.

Under its CEO, Alessandro Bogliolo, Tiffany is trying to appeal to younger shoppers with more modern takes on jewelry. Earlier this year, it launched a men's jewelry collection, and it's increasing its marketing to a more diverse customer base like same-sex couples. It's also been renovating its flagship store in Manhattan.

Tiffany has been putting plans in place to appeal to a younger group of customers who are more used to shopping online and hunting for fashion deals. Tiffany has notably highlighted ways customers can personalize jewelry and started letting people trace the origin of their diamonds.

Still, Tiffany's U.S. sales have been stagnating as China's slowing economy has weighed on spending by Chinese tourists, who make up a substantial portion of luxury spending. The strong dollar has also made Tiffany products more expensive for consumers outside the U.S.

China’s sales in mainland China continue to be strong, according to Tiffany. To maintain its momentum, Tiffany is either opening or upgrading its flagship stores in three key metropolitan areas: Beijing, Shanghai and Hong Kong. It's also expanding its airport duty-free store networks. During the current quarter, it plans to open its first Tiffany store in a duty-free zone in mainland China at the Beijing Airport with a partner. This past fall, it relocated and upgraded its directly-owned store at the Hong Kong airport.