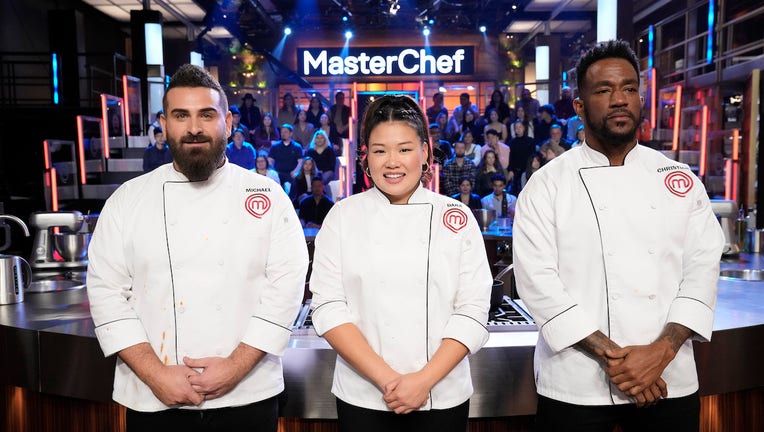 Chicago - Welcome back to "MasterChef" recaps! The season ends here at "Finale — Part 2," as another "MasterChef" alum makes an appearance and our finalists finish out their three-course meal before one of them becomes the latest champ of the MC Kitchen. Miss a week? You can read our recaps and watch On Demand, on FOXNow, on Hulu and on Tubi, FOX’s free streaming service. This television station is owned by the FOX Corporation.

It’s finally here, 20 episodes and a lot of spilled milk later: the "MasterChef: Back to Win" finale! Last week gave us the semifinals and the first half of the finale, so let’s break down where we left off: New Orleans cook Christian Green, 20-year-old "MasterChef Junior" finalist Dara Yu and 34-year-old Austin chef Michael Silverstein served their appetizers to judges Gordon Ramsay, Joe Bastianich and Aarón Sanchez, receiving mostly unanimous praise.

"MasterChef: Back to Win" finale recap: Get! It! On! The! Plate! 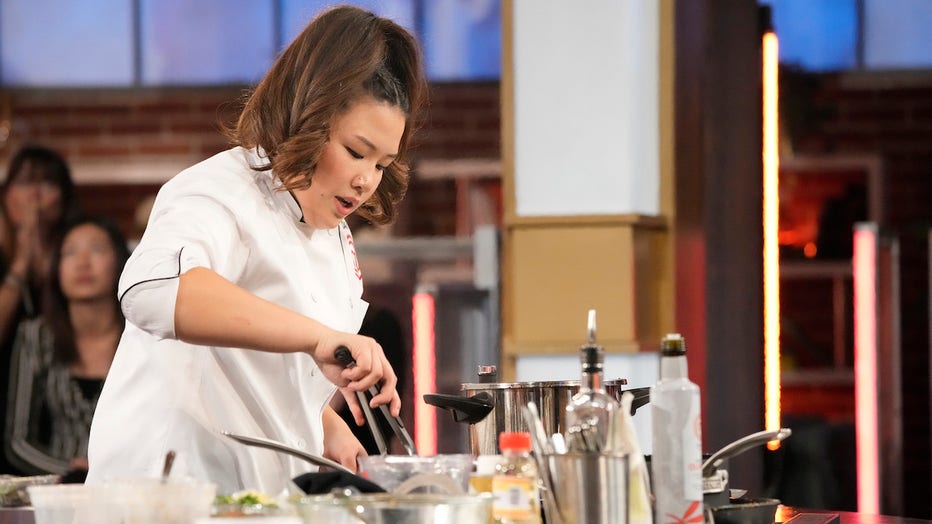 As we jump into "Finale — Part 2," it’s entree-cooking time and the pressure is on, but at least the chefs’ families and friends have arrived to cheer them in the MasterChef Kitchen. Everyone’s taking big risks with their protein: Michael’s chili-rubbed loin of lamb is putting him behind, leaving a mess on his station.

Dara, meanwhile, is cool, calm and collected, but she won’t know whether her braised short ribs have turned out until she lifts the lid on that pressure cooker in the final minutes of the cook. And Christian’s taking the biggest risk of all, trying to get four differently-sized filets mignon to a perfect medium rare for the judges — who are joined by fellow "MasterChef" judge Graham Elliot.

The major tension in the entree round comes from seeing how all three of these chefs, who’ve worked so hard and grown so much throughout the competition, work. Dara, who’s built a reputation for being flustered in high-pressure environments, is shockingly clean and organized here; as she plates, she repeats to herself, "I work clean, I look clean, my plate will be clean." Compare that to Michael, whose component-heavy dish leaves his station looking like a culinary tornado passed through it. "It looks like he’s making five dishes," Joe remarks.

Now, for the judging, which starts with Michael’s short ribs — not evenly seared, according to Gordon, but great colors, if a little overcooked. Aarón lauds his blending of Mesoamerican ingredients, including a few different presentations of corn. "It’s a flavor bomb," Graham gushes. 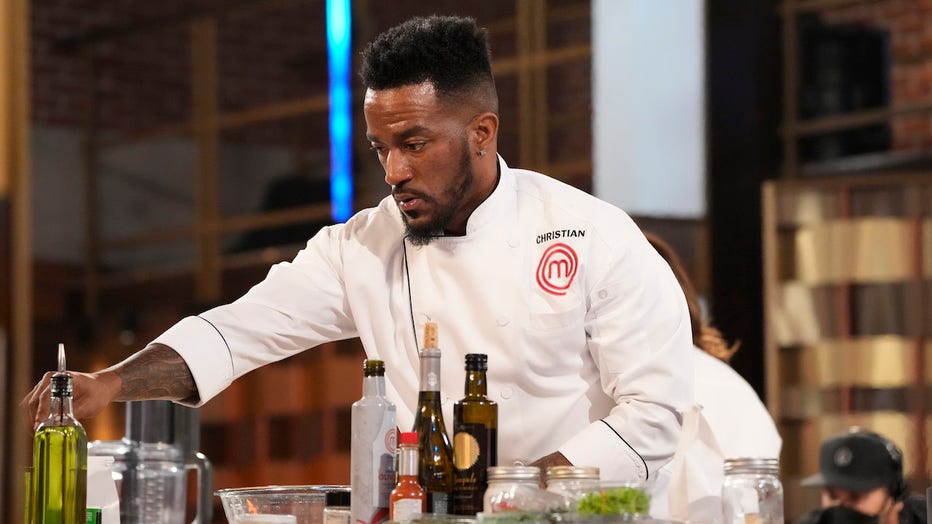 Christian’s plate surprises with a shockingly elegant presentation for the comparatively rustic cook — his Cajun-rubbed filet mignon looks beautiful. Still, unfortunately, two of the filets are rare rather than medium-rare, which puts a damper on the otherwise incredible flavors. "I like the dish," Joe says, "but if I were served this in my restaurant, two of these dishes would go back to the kitchen."

"MasterChef: Back to Win" finale recap: A sweet surprise cameo

Now on to the dessert round, with a special guest: Milk Bar maven and "MasterChef Junior" judge Christina Tosi, strutting out in a stunning black and gold pantsuit. Dara swoons at the return of her beloved judge ("My head is just rainbows and butterflies!"), and she’s not the only one — fellow returning "Junior" contestant Shayne tells her from the balcony, "I’m a grown man now, a lot has changed!" Behave, young man!

Onto the cook, as the three finalists race to close out their three-course menus on a high. Dara’s shooting for a vanilla ile flottante ("floating island"), a kind of deconstructed pavlova with a meringue sitting atop a creme Anglaise, with tropical fruit and caramelized, puffed forbidden rice.

The results, simply put, are gorgeous, with all three finalists putting forth incredible-looking dishes. Dara’s floating island gets high marks for plating from Gordon, the white meringue dome popping against the stark black bowl it’s served in. "It’s full of surprises," says Christina, who’s impressed she thought so much about texture. Joe loves the textural contrast of the forbidden rice and Aarón compliments her on a "well-seasoned" dessert.

Next comes Michael, with his tres leches — sans one fried milk ball, which he decides to short Aarón on because he "was hoping that Aarón would be the most forgiving." Gordon’s advice? Just take one off everyone’s plate, so no one’s missing anything. Still, the dish's components go over well, Gordon reflecting that Michael is "pushing the boundaries and testing our palates." Joe calls the dessert a triumph. 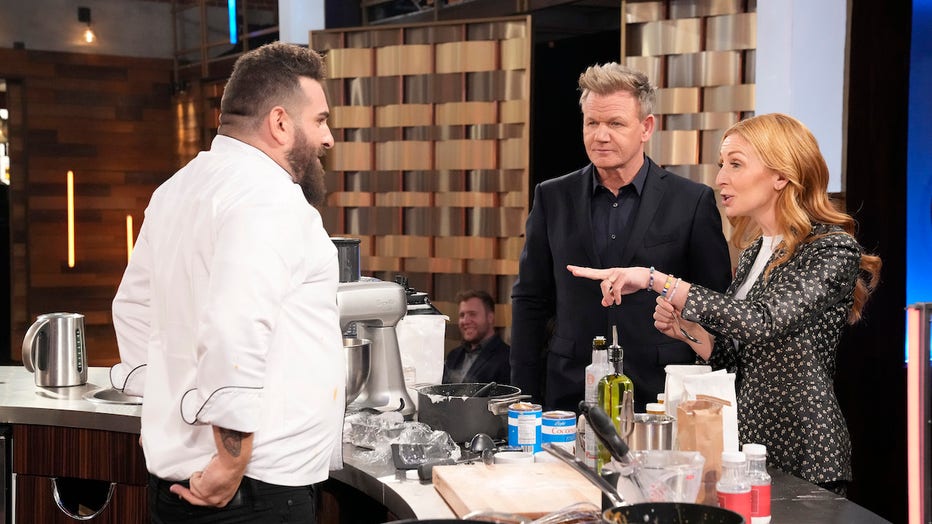 Finally, there’s Christian’s banana pudding, a sweet but earthy dessert that makes both his mother and son in the audience emotional. That goes for Christian too, who’s obviously affected as he tells the story of his grandmother and says that she would be really proud of him at this moment. Gordon describes the dish as a "unique buffet off a floating superyacht" (whatever that means, chef) but dings him for not elevating the pudding more.

Christina worries that the "flavor story" he wanted to tell with this dish isn’t his; "I don’t know if I learned much about you in this dessert." Au contraire, says Aarón, who thinks it’s straightforward and honest — Christian in a nutshell.

After the meal, the judges deliberate in the restaurant section of the set. They love that Michael didn’t play it safe, but Dara’s meringue was so memorable. Christina reiterates that Christian put forth "Christian’s grandma’s banana pudding, not Christian’s banana pudding," which seems unfair, considering how often "MasterChef" encourages chefs to draw from their personal experiences and backgrounds for cooking. Joe has the right idea: "[Christian’s] currency is not risk; it’s honesty," and with the pudding, he accomplished that.

The judges exit the restaurant, re-enter the kitchen, and announce the winner of a hard-fought battle — a result that shocked a lot of "MasterChef" prognosticators who thought they’d read the tea leaves. You see, a few weeks ago, GrubHub put out a commercial touting their new "Grubhub Table" restaurant (the same one promoted in an earlier episode this season), featuring several previous "MasterChef" winners — and Michael. This led some to believe that he’d won the competition, and Grubhub had jumped the gun and put out the TV spot early. 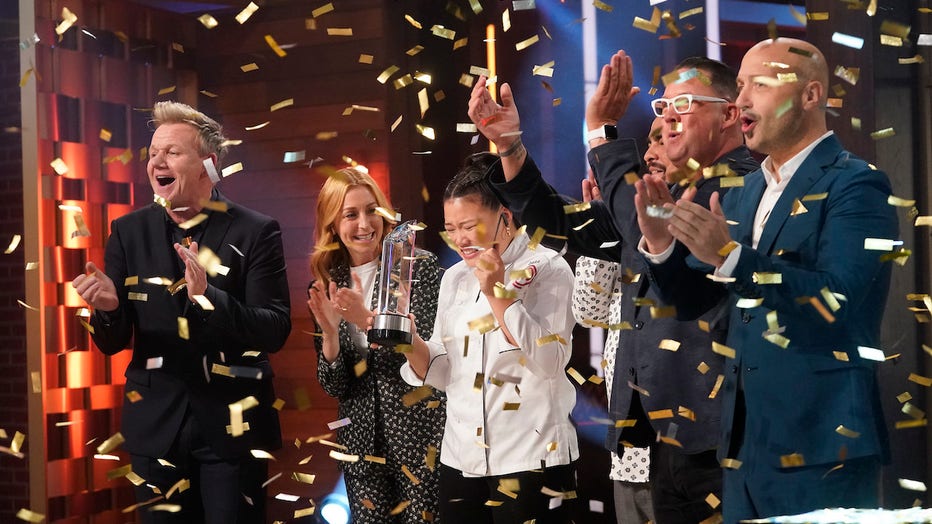 Well-played, Grubhub, you fooled us all because Dara gets the trophy, the money and the promotional cookware and kitchen appliance sets. It’s a well-deserved win, the culmination of a journey she started when she was 12years old and just narrowly missed the win in the first season of "MasterChef Junior." Since then, she’s hammered away at culinary school and come back with a fierce set of skills and the discipline to put them to use. Sure, she got frazzled in more than a few challenges, but her poise showed us she’d overcome those hurdles in the finale. Even Gordon can’t resist beaming a smile as he runs up to her, shouting, "You did it!"

WATCH FREE ON TUBI: "Anthony Bourdain: A Cook’s Tour" — get the app

And so ends "MasterChef: Back to Win," a well-fought competition that resulted in the most thrilling potential ending. As a longtime fan of the show, it was nice to see this all-star season reflect on its many years on the air, and the many different chefs whose lives it changed.

That was the real story of this season — just as we watched 20 different chefs show off what they’ve learned since their last time at bat, we also revisited winners and judges from seasons past, reflecting on just how far they’ve come in the culinary world since. Now, 20-year-old Dara joins their ranks, and it’s thrilling to imagine how far she might go with so much of her culinary career ahead of her.

About the writer: Clint Worthington is a member of the Chicago Film Critics Association. He is the founder and editor-in-chief of The Spool, and a Senior Staff Writer at Consequence. You can find his other work at Vulture, Nerdist, RogerEbert.com and elsewhere.

"Great British Bake-Off" icon Mary Berry cooks up comfort food in her cozy kitchen, casually coaxing curious cooks into concocting Berry’s favorite recipes. (No, we will not apologize for any of that alliteration.) One season, eight episodes.

How to watch "MasterChef"

"MasterChef" airs Wednesdays at 8 p.m. EST on FOX, though there’s no word yet on when the next season will air. You can also watch On Demand or stream online via FOXNow. All 12 seasons of the show, including much of the current season, are streaming on Hulu. And there’s a whole world of "MasterChef" streaming free on Tubi, including beloved series "MasterChef Junior" and several international editions.