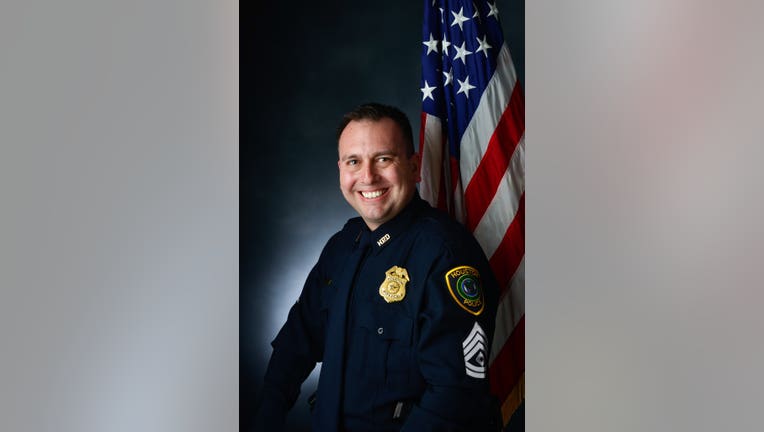 HOUSTON - A memorial service will be held on Wednesday for Houston Police Department Sgt. Sean Rios.

Family, friends, law enforcement and those who knew Sgt. Rios will gather at Grace Church Houston at 11 a.m. for a private service.

Full police honors will be rendered outside of the church following the service.

Members of the public will then have the opportunity to pay their respects along the route of a motorcade escort back to Peevey Funeral Home.

Sgt. Rios, who leaves behind a wife and four children, was shot and killed in north Houston last week during a "gun battle" in the 7900 block of the North Freeway.

The 25-year HPD veteran made it inside the Taj Inn Suites to ask for emergency help before collapsing.

Sgt. Rios was sworn in as an HPD officer in February 1996 and was assigned to the Airport Division.

Robert Soliz, Jr., 24, is charged with murder in connection to the deadly shooting.

On Tuesday, police identified a person of interest who has not been charged. Police are searching for Jason Frank Vazquez, so they can bring him in for questioning.

Police say the person of interest was seen driving a black Chevrolet pickup truck and speaking with Soliz after the shooting.

Anyone with information is the case is asked to contact the HPD Special Investigations Unit at 713-308-3600 or Crime Stoppers at 713-222-TIPS.