With 249,490 people in attendance on Saturday, a gunman endangered the lives of thousands on Saturday night, when he shot a gun inside the Minnesota State Fairgrounds.

ST. PAUL, Minn. (FOX 9) - A person was shot during a brawl in the Midway section of the Minnesota State Fair Saturday night, triggering a mass panic and chaotic crowd rushing out of the area, resulting in the early closure of the fairgrounds.

The Minnesota State Fair Police Department said that officers responded to a gunshot shortly after 10 p.m. Saturday near the intersection of Carnes Avenue and Liggett Street when the area was "heavily populated with fair guests and a large contingent of law enforcement."

Officers later located a victim with a non-life threatening gunshot wound to the leg, and paramedics took the victim to the hospital. The shooter took off in the crowd and was not arrested. The Minnesota Bureau of Criminal Apprehension is assisting with the investigation.

Knafla said police were already at the scene of the shooting, responding to a report of a fight and large groups of juveniles running through the midway. Witnesses described seeing a fight involving multiple people near the area, with police moving quickly to break it up.

Ali Nesmith says she was in a bar nearby when she saw a commotion and looked over to see a group of about three people fighting. As people started to run, she noticed her eyes burning. She believes it was tear gas, though says an officer later told her it was pepper spray.

Crowds at the Minnesota State Fair flee the Midway area after witnesses reported hearing a gunshot during a brawl. The State Fair closed early by police orders. Video credit: Sumaya A

"A fog overtook the intersection, and you could hear echoes of people coughing and gagging, everyone was covering their nose and mouth with their shirts and sweatshirts," she told FOX 9.

"There was a shift, people were running away, and then people just started booking out of there. It all happened so quick… all I knew is that I just wanted to get away from there," she added.

One fairgoer who declined to be interviewed on the record told FOX 9 she heard three gunshots. She recorded on her phone the panicked moments as she and her friends ran away.

The State Fair issued an update just before 11 p.m. saying "The fairgrounds began closing early this evening at approximately 10:20 p.m. due to disturbances in the area of the Midway. There is nothing more to confirm at this time." 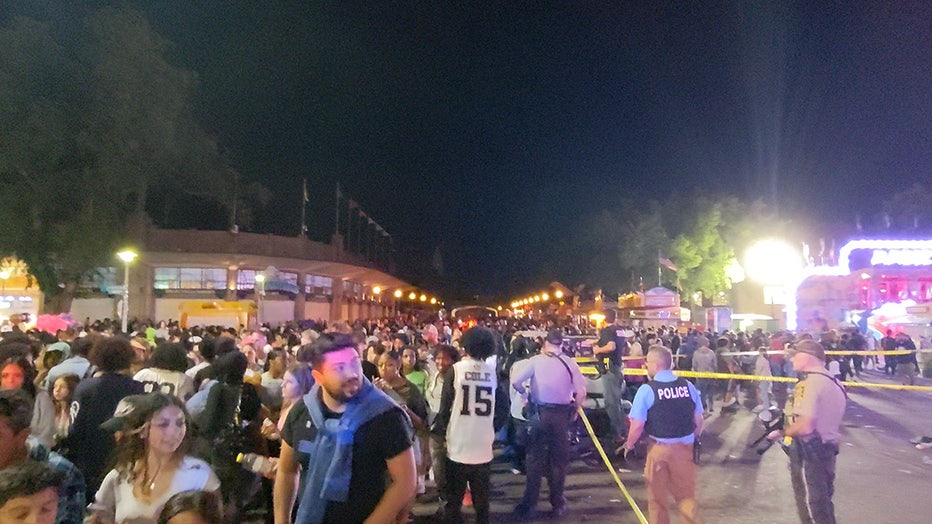 Law enforcement will be doubled at the fair on Sunday and Monday, officials said during the press conference.

Anyone with information about Saturday's incident can reach out to the Minnesota Bureau of Criminal Apprehension tip line at 651-793-7000 or email john.engle@msfpd.org.

One person was hurt in a shooting at the Minnesota State Fair, leaving many wondering how they got the weapon past the metal detectors.

In a live stream on Sunday afternoon, Sheriff Bob Fletcher, who says he was on the fairgrounds when shots were fired, further detailed the chaotic moments leading up to the shooting.

Sheriff Fletcher said there was a large fight near the French fries stand in the Midway about 20 minutes before the shooting. Deputies were able to clear out that crowd using "chemical irritants," Fletcher explained. But, shortly after, the groups got back together.

The sheriff says he and another deputy were following a group of 30 people that eventually confronted an individual, sparking another fight.

At that time, Deputy Alex Graham, who joined Sheriff Fletcher for the live stream, says there were 30 to 50 people "fighting, brawling, kicking, pushing, everything." Again deputies used chemical irritants to break up the fight. One person raised their weapon and fired a round, causing the crowd to scatter and creating a panic.

Deputies tried to chase that person, but Graham says the man slipped away in the crowd.

About 20 minutes later, the shooting victim walked up to firefighters at the fair, seeking help. While Fletcher only saw one shot being fired, there are other reports of at least three shots being fired. Only one casing was recovered, from the shooting deputies witnessed.

"What goes on here at 9:30 at night is different than what happens here the rest of the day," said Sheriff Fletcher. "The entire fair is extremely safe. But after 9:30 on the weekends here, in the Midway, it gets to be a collection of people who have conflicts with each other."

Fletcher says he and his deputies were within 40 feet of the shooter when shots were fired echoing what Governor Walz said earlier in the day.

"If a person doesn't care about the consequences of their actions, it's very, very difficult to stop them from using a gun on someone," said Fletcher.

Sheriff Fletcher also pointed on some weak points with security, including failures with metal detectors, and how easy it might be for someone to toss a weapon over the fence – if not just climbing over the fence themselves.

"When you have a quarter of a million people coming in here, it's not going to be a perfect scenario," concluded Fletcher.