A recent survey found that more than half of Americans favor the death penalty despite its decline in states over the past decade, according to the Pew Research Center.

The survey was conducted in the United States between April 5 - 11 and had 5,109 adult participants.

A total of 60% surveyed favored the death penalty with 27% strongly favoring it, according to Pew.

Pew also noted that 2020 saw the lowest number of capital executions in more than three decades. While the COVID-19 pandemic contributed to the low numbers, the death penalty was already seeing a slow decline throughout the U.S. 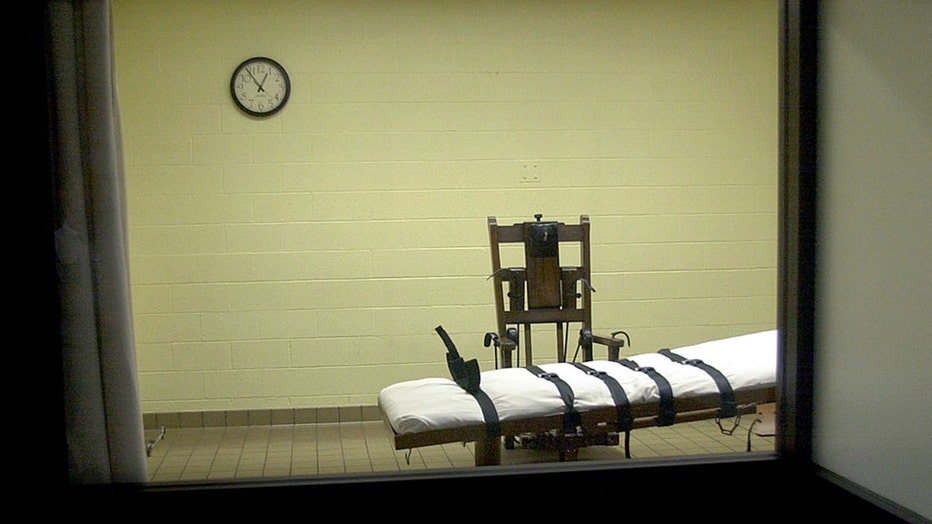 FILE - A view of the death chamber from the witness room at the Southern Ohio Correctional Facility shows an electric chair and gurney Aug. 29, 2001 in Lucasville, Ohio.

The deterrent effect of the death penalty has also long been questioned. Several studies have shown it doesn’t work to reduce crime. Particularly, perpetrators of mass killings are already subject to the death penalty in 30 states as well as under federal law. According to an analysis from the DPIC, all but two of the states where mass shootings have occurred already have capital punishment.

And despite mounting evidence that the death penalty does not significantly deter serious crimes, most Americans believe it is morally justified to carry out an execution for people who commit serious crimes such as murder.

Additionally, 78% believed there was some risk that an innocent person would be put to death, "while only 21% think there are adequate safeguards in place to prevent that from happening."

Pew noted that only 30% of the people who supported the death penalty believe there are adequate safeguards to prevent wrongful executions.

Data collected by the Death Penalty Information Center found "that for every 8.3 people who have been put to death in the U.S. since executions resumed in the 1970s, one person who had been wrongfully convicted and sentenced to death has been exonerated."

Further research was done on the 185 exonerated cases and disturbing patterns of misconduct and racial bias from law enforcement and lawyers were discovered, according to DPIC.

RELATED: Decades on death row: Taking a closer look at an Arizona murder case and the family the victim left behind

"Nearly 70% of the exonerations involved misconduct by police, prosecutors, or other government officials. Eighty percent of wrongful capital convictions involved some combination of misconduct or perjury/false accusation and more than half involved both," according to DPIC.

Of the adults surveyed, 56% believed Black people were more likely than White people to be sentenced to death if convicted of a serious crime, Pew continued.

"This view is particularly widespread among Black adults: 85% of Black adults say Black people are more likely than Whites to receive the death penalty for being convicted of similar crimes (61% of Hispanic adults and 49% of White adults say this)," according to Pew.

A 2020 report conducted by DPIC found that throughout the modern era, people of color have been overrepresented on death row — in 2019, 52% of the death row inmates were Black, but that number has dropped to 42% this year when approximately 60% of the population is White. But it also showed that the killers of White people were more likely than the killers of Black people to face the death penalty, and cases with White victims were more likely to be investigated.

RELATED: For the first time in more than 40 years, media were not allowed to witness a Texas execution

Views on the death penalty also show significant differences when it comes to political party affiliation.

"About a quarter of Democrats (23%) strongly oppose the death penalty, compared with 17% who strongly favor it," Pew added.

Pew noted that over the past two years, the number of Republicans in favor of the death penalty for serious crimes decreased by 7%.

Age ranges among political party affiliation also showed varying support or disapproval which mirrored generational differences. For instance, 64% of Republicans who were between the ages of 18-34 were less likely to support the death penalty.

Among Democrats, those who were between the ages of 50 to 64 were more likely to support the death penalty, Pew said.

The death penalty is legal in 24 states and 23 states have now abolished it. Three others have moratoriums in place that were imposed by their governors.