With many recent events, school safety is at the top of mind. A brand new school in the Tolleson Union High School District in the West Valley was being built from the ground up, so the district took full advantage and decided to add the most state of the art safety features. FOX 10's Danielle Miller reports.

TOLLESON, Ariz. - With many recent events, school safety is at the top of mind. A brand new school in the Tolleson Union High School District in the West Valley was being built from the ground up, so the district took full advantage and decided to add the most state of the art safety features.

West Point High School: Home of the Dragons. This newest high school for Tolleson Union now houses freshman and sophomores for the first school year. When working with the design firm ADM Group, topping the list of requirements from the district was safety, and the newest and best safety features are in and around the entire campus. 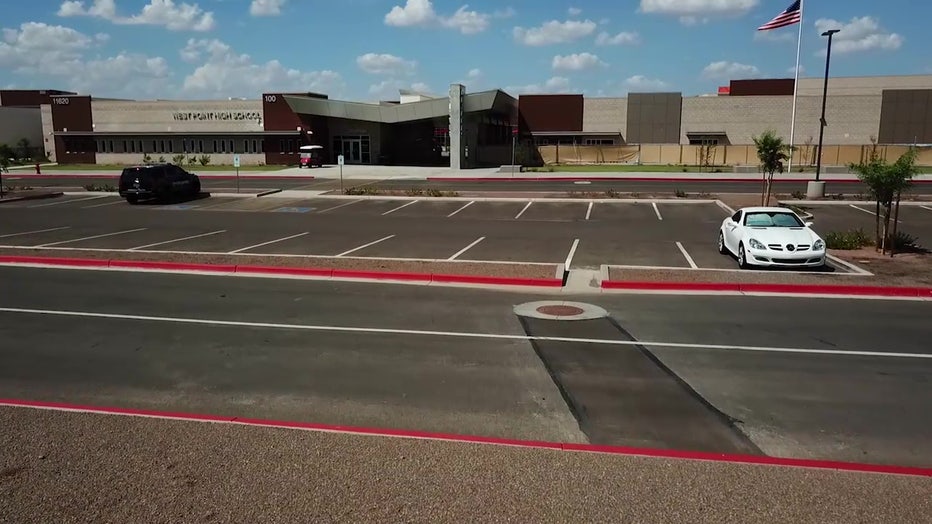 "Students are very well aware of the importance because they've had to live this all of their lives," said Superintendent Nora Gutierrez. "This is not new to our students at all."

One of the biggest safety features on the property is a double barrier gate that goes around the entire campus.

"We have the outside perimeter that can be locked, so that we can have a lockdown, a lockout at any time," said Gutierrez.

Gutierrez says the front gate to the school is also an important feature.

"Students enter through the front of the school if they are being dropped off, and gates are manned there with a security guard," said Gutierrez. "Anyone coming in after the gates are locked is not permitted without being checked in. They need to be checked in through the office, and then, they need to be buzzed through the door." 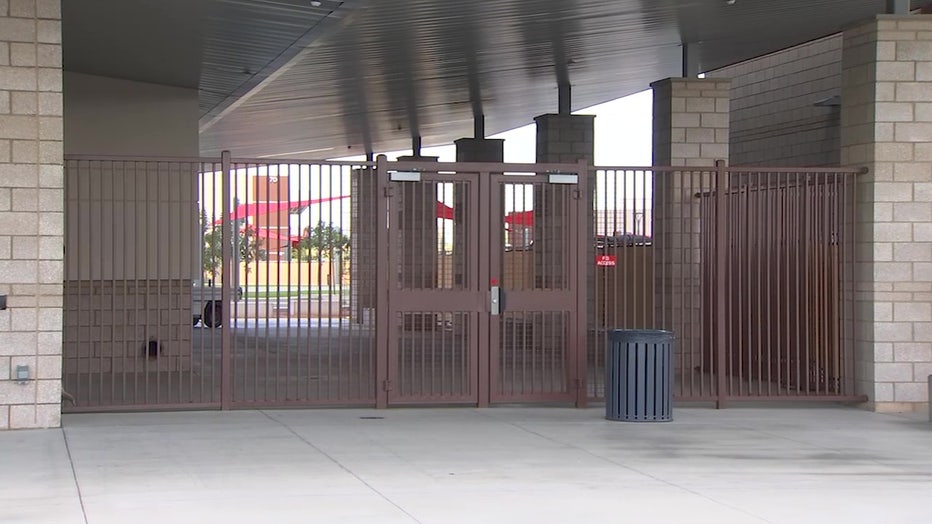 Gutierrez says the during the design phase they also had the staff's safety in mind.

"For the administration, the absolute best feature is the openness of the campus in the way that the campus was built," said Gutierrez. "We have a center quad where all of our students can gather, if need be. From that quad and every single building beginning with the administration building, there is a sight that every administrator, every staff member, teacher, security guard can stand and have a great view of the entire campus."

Nina Sheriff, Director of Design with ADM Group says the school was designed to have an open concept and a lot of natural light, which is something the students requested.

"We wanted to give glass in each of the corridors, in front of the classrooms, and everyone is like, 'aren't you afraid that it could be a problem if an active shooter got into one of the buildings?' So we designed, as part of the window system, to have rolling shades that can come down, in the event that there's somebody coming down that corridor. All of the classroom doors can be locked from the inside of the classroom," said Sheriff. 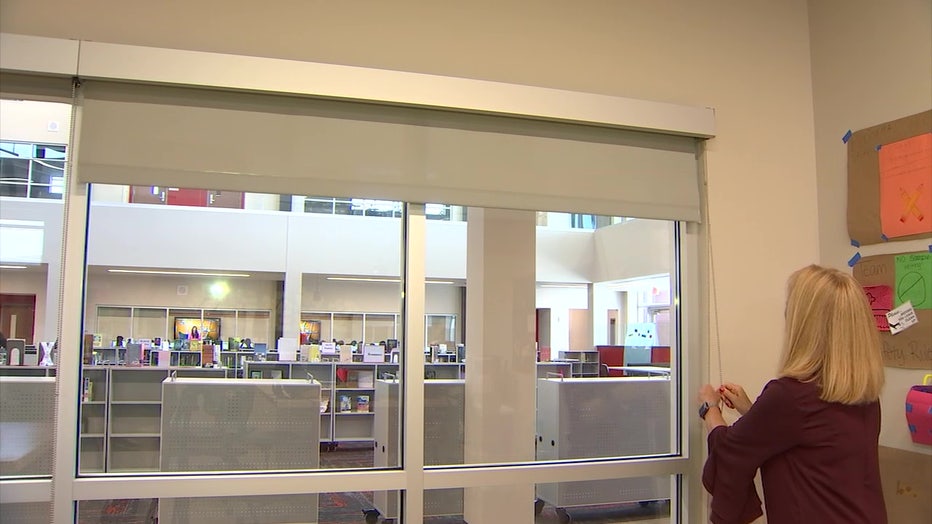 Sheriff says although safety was top priority for this project, building a school that's innovative and tech-savvy was the goal. The school has an innovation center, complete with STEM classrooms, meeting spaces, a library, and media center. It has a beautiful two-story view of the mountains and overlooks the quad.

"Pistachio trees in it, which will eventually have a very big umbrella that will all grow together," said Sheriff. "Underneath is artificial turf. We have charging stations for the students so they can plug in. There's wifi out on the quad." 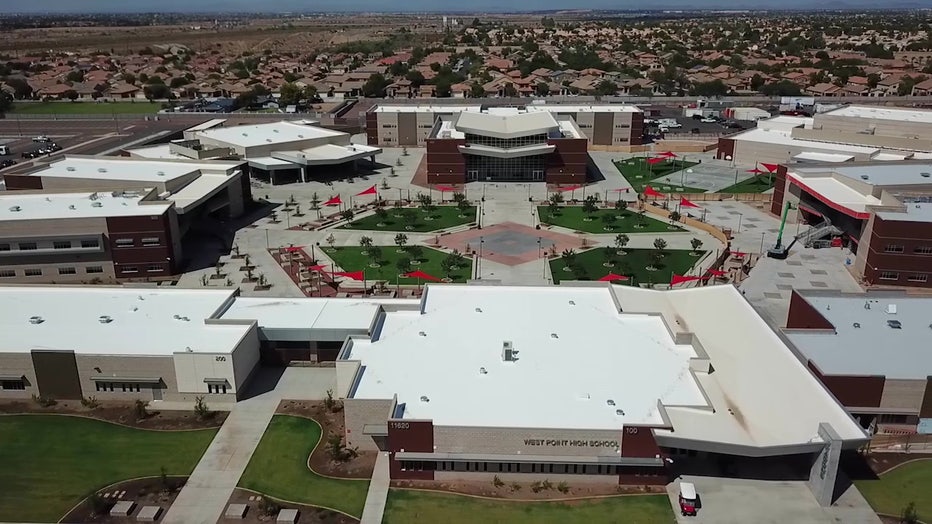 The new gym sports the school's colors and logo throughout, and the dining center could compete with most college students unions.

"It's no different if you go in there, and it's almost like you could be in a Starbucks because there's bar top seating," said Sheriff. "It has charging stations. Students can plug into it, they can work on their laptop. There's inside and outside areas in front of the dining area."

Due to the school's partnership with Luke Air Force Base, the chevron theme is also used for an added touch of design. The school is only in its first year, and it isn't 100% complete, but it's already leading the way, Taking school safety, design and technology to new heights. Phase two, which will include a performing arts center, varsity football field and an educational building, will be completed by April 2020. 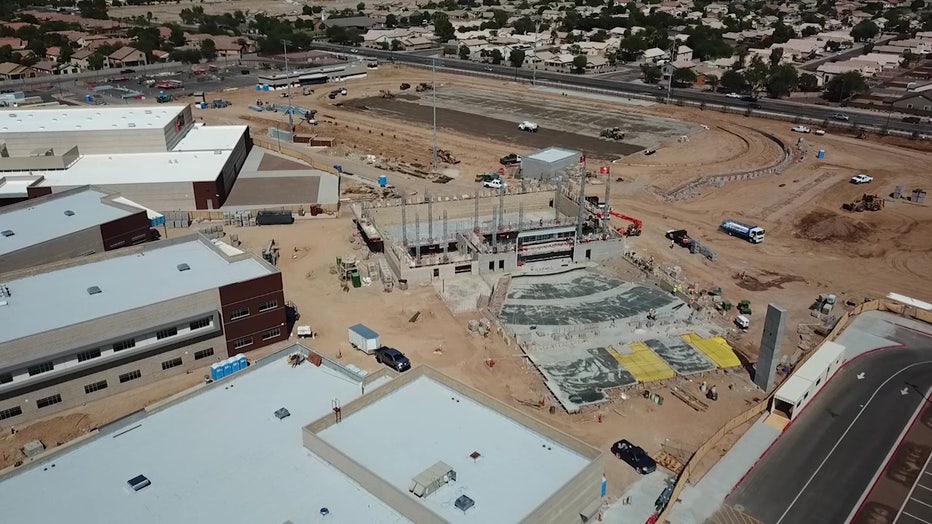