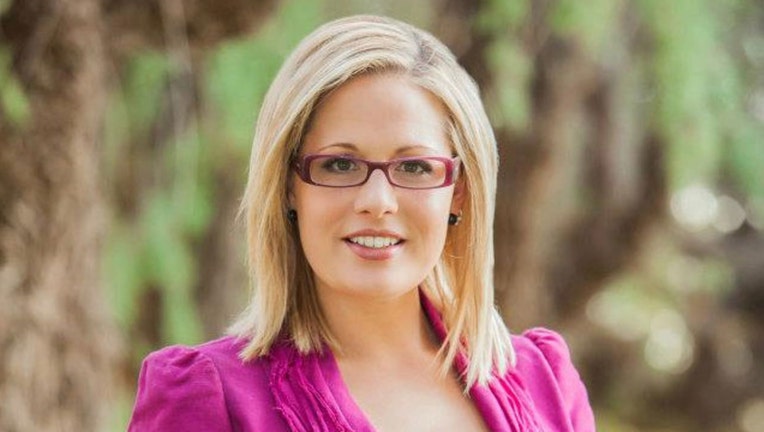 The surreptitious recording dates from 2011, after Arizona Republicans had passed SB1070, a controversial immigration law that led to nationwide boycotts and concern even among some Arizona Republicans that the Legislature had moved too far right. Those concerns led to a recall against the then-senate president Russell Pearce, whom Sinema blamed in her remarks for much of the discord.

But the talk also contains unusually partisan language from a candidate who is one of the more bipartisan votes in congress and who has fashioned herself as a nonpartisan problem-solver in the current senate campaign. In the speech, Sinema, of Tucson, also noted that schoolchildren are taught five "Cs" that represent Arizona and suggested adding a sixth: "Crazy."

"She was frustrated that no one in the state legislature was standing up to out-of-state special interests working to take away health care from children, make tuition more expensive, and take job security away from working families," Sinema spokeswoman Helen Hare said in a statement Thursday. "Kyrsten was born here, and will always stand up to outside special interest groups to protect and defend Arizonans."

"Calling Arizonans crazy and having particular disdain for Republicans when she wants Republicans to vote for her is unbelievable," McSally told reporters. "And Arizonans need to know about it."

Sinema has maintained a small but consistent public polling lead in the race, partly by appealing to conservative-leaning independents and moderate Republicans. The GOP has worked hard to break that grip. Recent attacks include pictures of Sinema in a pink tutu at a protest against the Iraq war, allegations that Sinema, a former rape crisis counselor, was soft on child molestation and a mailer that portrayed a mushroom cloud over Phoenix if the Democrat is elected.

The video was released by The Reagan Battalion, an anonymous conservative group, on Twitter. It shows Sinema, who is bisexual, addressing a group beneath a banner for the Texas Stonewall Democrats, a Democratic LGBTQ group in that state. She opens by noting that people had been calling Arizona "crazy" recently and blames it on the GOP. "There's something wrong with the people in public office in Arizona," Sinema said. "People are saying the tea party, the tea party. Those people have been in charge 20 years in Arizona. They're called Republicans."

She spun what to Democrats is a familiar story - that Pearce was carrying hardline immigration bills and other conservative legislation on abortion and health care at the behest of racist anti-immigrant groups and a corporate-backed conservative organization that writes "model legislation" for state lawmakers. And she gave what turns out to be a prescient warning to Texas liberals, who have since watched the GOP gain in their state Legislature and pass increasingly hardline immigration laws. "Why it's important to think about what's happening in Arizona," Sinema said, "is simply because that's what's coming to your state next."

On Thursday night, campaign spokesperson Helen Hare issued a comment on the controversy, in an e-mail sent to FOX 10 Phoenix.