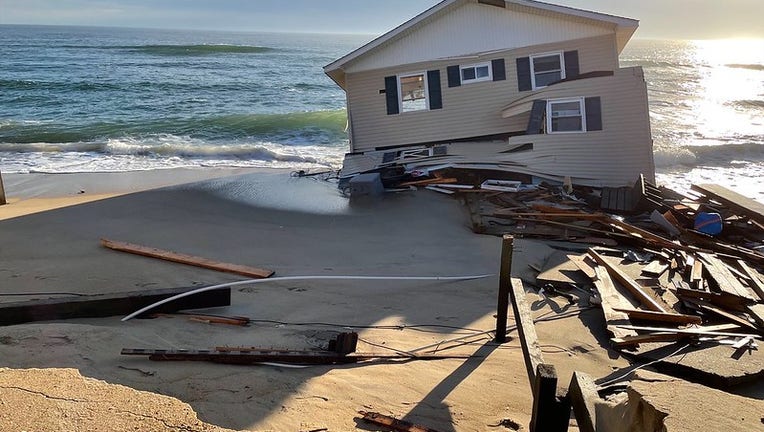 The collapsed house is pictured in a provided photo from Cape Hatteras National Seashore on Feb. 9, 2022, in Rodanthe, North Carolina. It said visitors should use caution on the beach and in the ocean between the villages of Rodanthe and Salvo due to

The collapse occurred sometime overnight on Feb. 9 in an area that has been particularly prone to erosion for more than a decade, according to the Island Free Press.

The five-bedroom beach cottage, which had been listed as a vacation rental, was built in 1980, real estate records on Trulia.com show. It had a market value of $328,900, according to the site.

The waves were also spreading debris along the Outer Banks shoreline, according to the National Park Service. It warned beach visitors to "use caution" on the beach and in the ocean between the villages of Rodanthe and Salvo due to home wreckage.

"The bulk of the debris is at the site of the collapsed house, located at 24183 Ocean Drive, Rodanthe," Cape Hatteras National Seashore said in a statement. "However, smaller amounts of debris have been spotted as far south as off-road vehicle ramp 23, more than seven miles away."

The sea level along North Carolina’s coast has risen roughly 3 inches since the early 1980s, according to NASA. Coastal erosion, which is common at most beaches in the state, results in U.S. property losses of about a half-billion dollars each year in the form of damaged structures and lost land, the agency said, citing the U.S. Global Change Research Program.

In May 2020, another nearby Rodanthe house also collapsed into the ocean, resulting in a similarly large debris field, according to local news outlets.

Earlier that month, the National Park Service said that it was planning to relocate the Long Point Cabins in Cape Lookout National Seashore, which is located south of Rodanthe, amid extreme high tides and hurricane surges.

"The NPS cannot sustain the Long Point Cabins where they are right now," the NPS wrote on Facebook in a May 1, 2020, post. "20 years ago, there was over 300' of beach and dunes between the cabins and high tide. Today, there is 48' of flat sand."

Experts have been sounding the alarm about the increasing risk coastal communities like Rodanthe face due to sea-level rise. The sea level off North Carolina’s coast is up to 11 inches higher than it was in 1950, according to National Oceanic and Atmospheric Administration data.

SeaLevelRise.org, a group that aims to educate the public and elected officials about the issue to help implement solutions, cites melting ice from the North and the South Poles as well as the slowing of the Gulf Stream as the "two largest contributors."

High tide flooding, sometimes referred to as "nuisance flooding" or" king tide flooding," is occurring more frequently every year as sea levels continue to rise, NOAA says. The U.S. Southeast Atlantic and Gulf Coast regions saw an increase of over 400 to 1,100%, respectively, in high tide flooding days compared to the year 2000, according to the agency.

NOAA predicts that by 2050, high tide flooding is likely to occur between 25 and 75 days per year, depending on the location.