After debris fell from a building in Midtown and killed a pedestrian, workers erected a protective shed over the sidewalk. The Buildings Department is investigating.

NEW YORK - An architect who was walking a few blocks from her office in the Times Square area was killed Tuesday morning when debris fell off of a building.

Erica Tishman, 60, was walking along 49th Street between Sixth and Seventh Avenues at about 10:45 a.m. when part of the facade of a building came crashing down.

Tishman had a head injury and was unconscious and unresponsive when officers found her, police said. She died at the scene.

Tishman was a noted architect and a vice president with Zubatkin Owner Representation, a project management firm in Manhattan.

The woman killed during a partial building collapse in the Times Square area was a prominent architect in Manhattan.

Tishman's was the latest in a number of deaths, going back decades, caused by pieces of buildings tumbling to the pavement in the nation's largest city.

On Tuesday, an initial report to the city Buildings Department said a piece of facade had fallen from a 17-story office building, where permits for facade work had been issued in recent months.

Building owner Himmel + Meringoff Properties said it was “saddened by this tragedy” and would fully cooperate with city officials.

Tishman, 60, worked on educational, athletic and other projects, according to a bio on her employer's website. A message was left with the company, Zubatkin Owner Representation LLC.

She had degrees from Princeton and Harvard and was a registered architect in New York and New Jersey, according to her company bio. 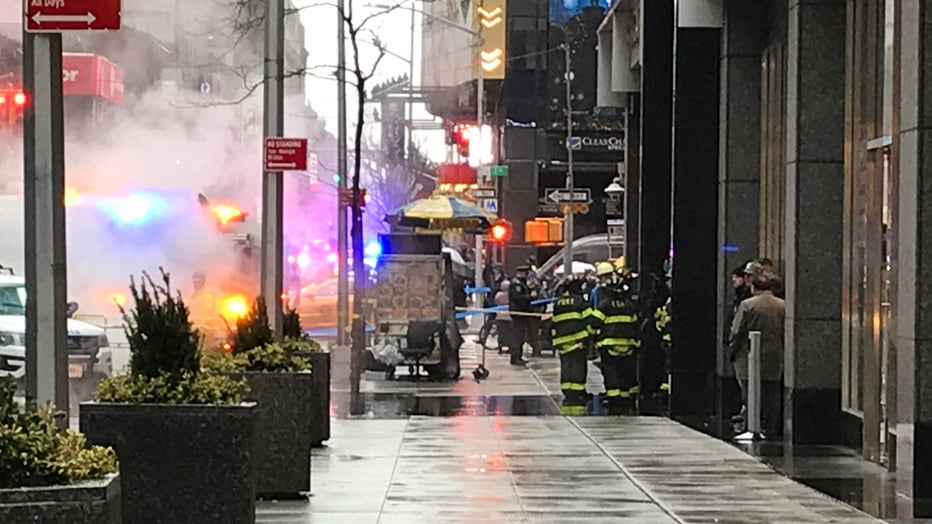 A woman was killed by falling debris in Midtown Manhattan on Tuesday morning. (Luke Funk/FOX5NY.com)

The city's Department of Buildings cited the owner of the building last April by for failing to maintain the exterior façade, according to reports. Inspectors noted that damage to the facade posed a falling hazard.

The Department of Buildings is now investigating, a spokesperson said.

"No pedestrian should be at risk from dangerous façade conditions," spokesperson Abigail Kunitz said. "Department of Buildings Engineers are on the scene to perform a full structural stability inspection of the building to ensure all New Yorkers are safe, and conduct a thorough investigation into the cause of this tragic incident."

The Office of the Chief Medical Examiner will determine the cause of Tishman's death.

The NYPD's investigation is ongoing.

The incident happened on a rainy morning in an area busy with tourists and office workers.  The street remained closed off for hours after the accident.