PHOENIX - Phoenix police say a man kidnapped a woman after she told him she didn't want to go out on a surprise Valentine's date with him.

The suspect also assaulted the woman the night before, according to court documents.

Phoenix police officers were called to the home at 8 a.m. on Feb. 10 after witnesses reported there was a fight between a man and a woman. Witnesses called police a second time after they said Cuspard forced the victim into a car, driving away.

"He was going down the alleyway doing 100 miles an hour," said Barbara Johnson, the victim's mother.

Police say Cuspard had decided to wrap his arms around her, carry her to his car and drive off with her in the passenger seat. He crashed the car into a curb, causing the airbags to go off.

"[My daughter's] head had hit the windshield, looked like she had three broken fingers," said Johnson. She also suffered a cut to her left hand during the crash. 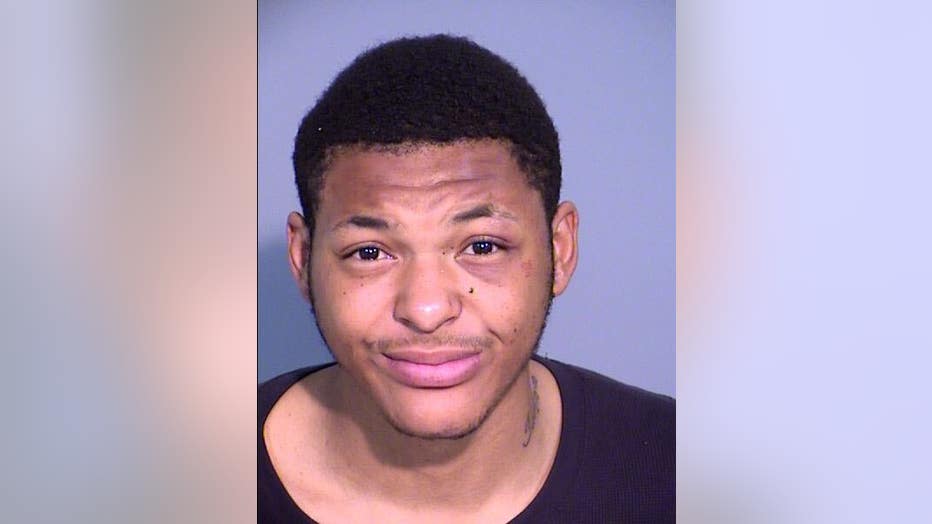 20-year-old Isaiah Cuspard was arrested after police say he forced a woman into his car and drove off against her will. Police say he also admitted to assaulting her the night before.

When officers arrived, Cuspard ran away. Officers say they were able to find Cuspard and they took him into custody.

Police say Cuspard admitted he was arrested the night before for assaulting the woman.

The next morning, Cuspard wanted to surprise her with a date for Valentine's Day, but she "wanted no part of it."

Court documents say "Isaiah said that [she] had told him no multiple times when he asked her to go with him. Isaiah said he felt offended and was going to take her against all means."

The victim also "believed that Isaiah was going to kill her."

Cuspard also admitted to being arrested the night prior for assaulting the victim.

"That relationship has been really violent from the beginning," Johnson said.

The mother says her daughter has two young kids with the suspect, and the message couldn't be clearer.

"You need some help," Johnson said. "You know you need to do something about your anger and aggression."

Cuspard was arrested and booked into Maricopa County Jail. He is being held on a $6,000 bond, and his next court appearance is next Thursday.

Police are recommending one charge of kidnapping.

A judge on Thursday ordered that Eric Maes, 30, remain jailed in lieu of $2 million bail on suspicion of premeditated first-degree murder, kidnapping in apprehension of injury, endangerment and theft of means of transportation.

Gabriel Gutierrez was arrested in connection to a shooting in Avondale that left a 24-year-old man dead. He is also accused of robbing and beating a landscaper and attacking his ex-girlfriend.

Bullhead City PD: Woman assaulted boyfriend who left TV on with a hammer

An Arizona woman is accused of aggravated assault after police say she struck her boyfriend in the head with a hammer, then pulled a gun on him during a drive to a hospital.

Phoenix woman escapes from axe-wielding suspect with help from stranger

The incident happened near 7th Avenue in Phoenix, and now, the suspect is under arrest.