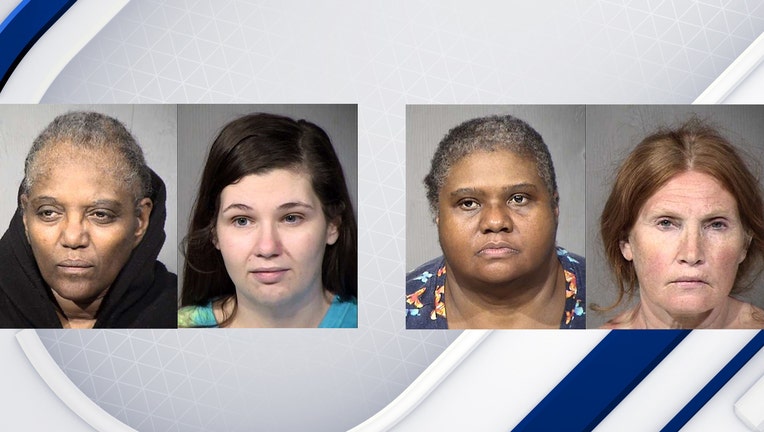 PHOENIX - Phoenix Police officials say arrests have been made in connection with an assault incident involving a woman at an adult care facility in Phoenix late August.

According to a statement released by police on Sept. 10, four people, identified as 59-year-old Rodina Bailey, 30-year-old Kristen Emerson, 55-year-old Stephanie James, and 54-year-old Tena Martinez, were arrested on Sept. 9.

The investigation began on Aug. 24, when officers were called to an adult care facility in an area north of Dobbins Road and 7th Street in South Phoenix. Staff members, according to investigators, called police and claimed a 34-year-old had assault staff members and another resident.

"Officers arrived, and contacted the involved parties and learned there were no injuries or information to corroborate the staff members' allegations," read a portion of the statement.

Investigators say on August 25, the care facility's director reviewed surveillance camera footage of the incident, and learned that information provided to police in relation to an alleged assault on staff members contracted what was seen in the video. The video was given to investigators, who, after reviewing the video footage, learned that four staff members actually started the altercation, assaulting the woman, forcing her to the floor, and then held her down.

The four people arrested, according to Phoenix Police officials, are all certified medical professionals. All four are accused of various offenses, including abuse of vulnerable adult and false reporting.