Once at the scene, officers found 30-year-old Jesus Gonzalez Berrelleza, who had been shot. He was pronounced dead at the scene.

PHOENIX - Two people have been arrested, including a teenager, after a shooting at a west Phoenix strip mall left a man dead.

Police say the shooting happened at about 6:30 p.m. on Sept. 13 near 59th Avenue and McDowell Road.

Once at the scene, officers found 30-year-old Jesus Gonzalez Berrelleza, who had been shot. He was pronounced dead at the scene.

Investigators obtained surveillance video from nearby businesses and eventually arrested 20-year-old Gilberto Millan in connection to the shooting. A second teenage suspect was arrested at a different location.

"Early information indicates there was an argument involving Jesus, an unknown male, and Gilberto at a restaurant," Sgt. Melissa Soliz said in a statement. "At some point the teenaged male arrived at the location. Gilberto retrieves a firearm from the vehicle driven by the teenage male. The shooting occurs, and Gilberto and the teenage male leave the area." 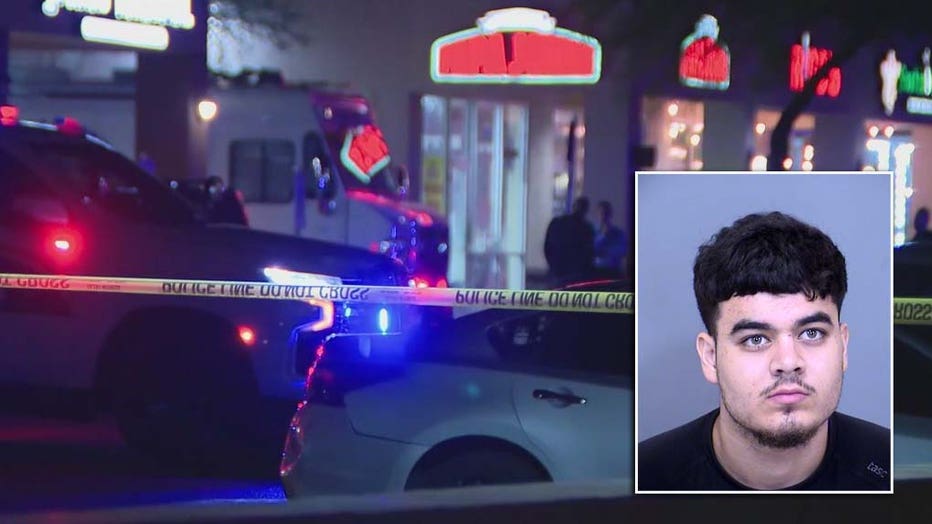 Gilberto Millan, 20, was arrested in connection to a shooting at a west Phoenix strip mall left a man dead.

Millan was booked into jail and is accused of first-degree murder.

The teenager was detained at a juvenile correction center. He is accused of facilitation to commit first-degree murder.

Anyone with information about this shooting is asked to call Phoenix Police at 602-262-6151.

The deadly shooting happened on Sept. 13 near 59th Avenue and McDowell Road at a strip mall. Police need the help of witnesses to piece together what happened.

A man and woman were killed in an Avondale shooting on Sunday, Sept. 11 and police say the suspect has been caught.

Two men are behind bars as Scottsdale Police say they're connected to a shooting at a short-term rental after being invited over by women from a nightclub in Phoenix.