WASHINGTON (AP) - President Donald Trump and the Senate's top Republican huddled Thursday over a huge COVID-19 rescue package, but hopes on Capitol Hill for a deal are souring and there's increasing worry that bipartisan congressional negotiations might collapse.

Majority Leader Mitch McConnell is a key player in the troubled talks and possesses far more experience than Trump's negotiating team, which is publicly frustrated by the inflexible tactics of House Speaker Nancy Pelosi, D-Calif., and Senate Minority leader Chuck Schumer, D-N.Y. The Democratic duo has not yielded much ground from an unprecedented $3.5 trillion House-passed rescue package.

McConnell seemed to downplay the significance of the Trump meeting, telling a reporter “we talked a little bit about everything.”

Pelosi and Schumer are exuding confidence in a political and legislative landscape that's tilted in their favor. Trump and McConnell both badly want an agreement, but Democrats control the House and may actually provide the lion's share of votes in the Senate. The votes, as Pelosi often says, are the currency of the realm.

The Democratic duo has stayed in sync throughout the talks — which they demanded — even reminding reporters Thursday that their relationship dates to Schumer's time as a hard-charging House member in the 1980s and early 1990s.

They say the coronavirus package needs to be huge in order to meet the moment: a surge in cases and deaths, double-digit joblessness, and the threat of poverty for millions of the newly unemployed.

“We believe the patient needs a major operation while Republicans want to apply just a Band-Aid,” Schumer said. “We won’t let them just pass the Band-Aid, go home and leave America bleeding.”

After a Wednesday session that produced no progress, White House chief of staff Mark Meadows and Treasury Secretary Steven Mnuchin were returning to Pelosi’s Capitol suite to confront the gulf in their negotiating stances. Both sides have set a goal of agreeing on a deal by week’s end — though that is appearing increasingly out of reach.

The White House is also promising that Trump will attempt to use executive orders to address elements of the congressional package involving evictions and jobless benefits. But there's no evidence that the strategy would have much impact or be anything close to what's necessary, and Pelosi appeared unimpressed at a morning news conference.

“I don't think they know what they're talking about,” Pelosi said dismissively. 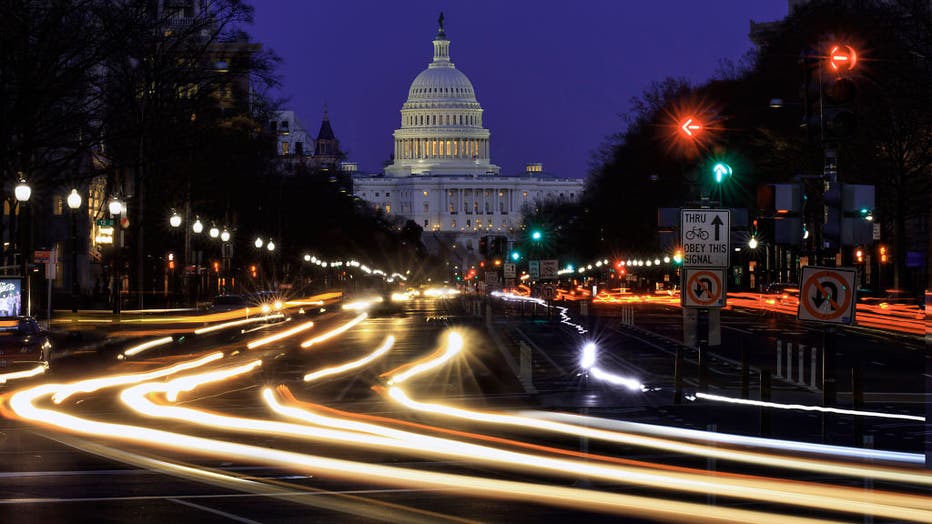 Pennsylvania Ave to US Capitol with streaked lights going towards US Capitol in Washington DC. during rush hour PM. (Photo by: Visions of America/Universal Images Group via Getty Images)

Addressing reporters, Pelosi and Schumer staked out a firm position to extend a lapsed $600-per-week bonus jobless benefit, demanded generous child care assistance and reiterated their demand for food stamps and assistance to renters and homeowners facing eviction or foreclosure.

“Don’t nickel and dime our children,” Pelosi said. “Don’t say we want to give a tax break to a business lunch and not give more money for children to have food stamps.”

Pelosi was referring to a GOP proposal to increase the deduction for business meals from 50% to 100%. The idea seems likely to die, along with President Donald Trump’s efforts to cut the Social Security payroll tax. But Schumer and Pelosi continue to push to restore a tax break for state and local taxes paid mostly by wealthier people with high incomes and valuable homes.

McConnell, R-Ky., is likely to have to assume a higher profile if the talks are to come to a successful close, but he issued a grim assessment of the situation on Thursday, again complaining that Pelosi and Schumer are not negotiating in good faith.

Frustration was palpable among Republican senators shuttling in and out of a GOP lunch session, some of whom say Schumer is intent on using the situation as a hammer against Republicans.

“As long as they calculate that they’re better off politically doing nothing, it’s going to be hard for us to move forward,” said Sen. Marco Rubio, R-Fla. “And that’s the calculation they’ve made, it appears.”

McConnell is sending the Senate home rather than forcing impatient senators to bide their time while Democrats play hardball. That suggests a vote won’t come until late next week or even after. Progress has been scant in the talks despite more than a week of negotiation.

At stake is a massive rescue measure blending benefits for the jobless, more than $100 billion to help reopen schools, another round of $1,200 direct payments to most people, and hundreds of billions of dollars for state and local governments to help them avoid furloughing workers and cutting services as tax revenues shrivel.

White House negotiators made some concessions on jobless benefits and aid to state and local governments in a Tuesday session — and then promptly got scalded by Republicans after details leaked out.

But Pelosi, a sometimes imperious force whose experience in negotiations is far more extensive than Meadows, will likely have to make some concessions soon. Her number for aid to states and local governments far exceeds what independent experts such as Moody's Analytics recommend, for example, and her position in favor of restoring the expensive state and local tax break is probably unsustainable.

“She’s not going to allow the negotiations to collapse. She knows what the right moment is to pull the trigger and to try and close the deal," said Democratic lobbyist Steve Elmendorf. "But she also knows when to wait and to let the other side come to you.”