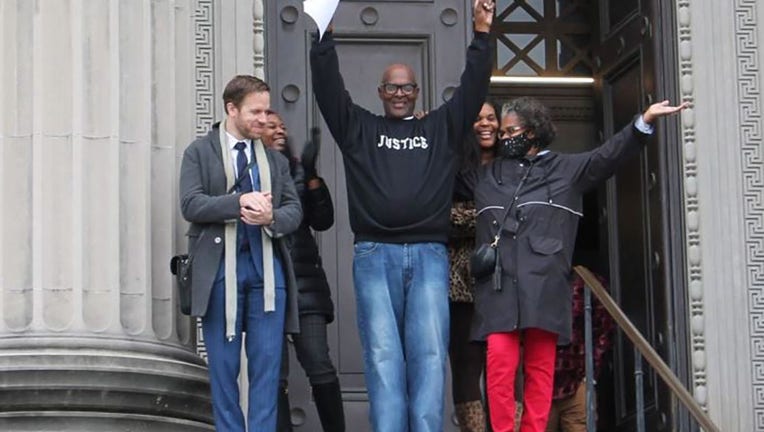 NEW ORLEANS - A man who spent nearly four decades behind bars for a 1983 killing won his freedom Thursday after New Orleans prosecutors joined defense lawyers in asking to have his murder conviction overturned.

Attorneys on both sides said evidence of inconsistencies in the only eyewitness’s testimony was kept from the jury that convicted Raymond Flanks. Their joint motion to vacate his conviction was approved Thursday morning by a state judge.

Flanks, 59, was in orange prison coveralls during the hearing but he was unshackled in the courtroom before Judge Rhonda Goode-Douglas heard attorneys statements. A few hours later, he emerged from the doors of the courthouse wearing a black T-shirt emblazoned with the word "Justice" — arms raised in triumph as a band of supporters applauded.

"Even though it was delayed justice, it was justice," Flanks, who is identified in court records as Raymond Flank, told reporters.

He was convicted in the December 1983 shooting death of Martin Carnesi during an armed robbery outside the home he Carnesi shared with his wife in eastern New Orleans.

Carnesi’s wife had identified Flanks as the killer. But her description of the suspect and the car he used differed at trial from her earlier statements to police and a grand jury.

The motion seeking to have the conviction thrown out said that Faye Carnesi, who is now deceased, had described the killer as having a white blotch on his cheek, that he was in his late 20s and that he drove an old car.

"Given that Mr. Flank was 20-years old, had no white blotches on his face, and drove a new car, these were important discrepancies," the motion said. The information might have affected the jury's decision, it said.

According to the motion, Flanks had been arrested for the armed robbery of a grocery store — he was later convicted and has not contested that verdict — when he was implicated in the Carnesi death.

Flanks was tried twice for the Carnesi killing. The first jury, in 1984, deadlocked even after being told the gun Flanks had when he was arrested for the grocery robbery was the murder weapon. That later turned out to be false, based on a 1985 examination of the weapon by a federal laboratory.

"The parties agree that, in this case which relied on a single eyewitness, competent counsel armed with the favorable evidence would have been able to present a compelling case that Mrs. Carnesi was innocently mistaken when presented with the wrong suspect," the motion said.

The Innocence Project New Orleans, which advocated for Flanks’ release, noted that the case involved "cross-racial identification" — the eyewitness was white, the suspect was Black — and said most wrongful convictions in New Orleans that involve withheld evidence involve Black defendants.

Relatives of the victim made clear they still believe Flanks is guilty.

"I’m still as angry as the day it happened," daughter Debra Carnesi Gonzales said in a statement read via Zoom by her daughter, Casey Gonzales.

Debra Gonzales recalled seeing her father dying on the ground and said: "I don’t believe that my mother was mistaken."

Outside the courthouse, Flanks expressed sympathy for Carnesi's family and said he holds no ill will toward them.

Flanks' case was the latest in a series of conviction reversals sought jointly by District Attorney Jason Williams, who ran on a reform platform before taking office in January 2021, and criminal justice advocates. Williams has touted his office's efforts to review longstanding convictions that resulted from non-unanimous jury verdicts, which are now illegal in Louisiana, and other dubious convictions from decades ago.