Howard the White Rhino turned 23 on Wednesday, just as he arrived to his new home at the Phoenix Zoo.

PHOENIX - Howard the White Rhino turned 23 on Wednesday, just as he arrived to his new home at the Phoenix Zoo.

As one can imagine, the task of moving an animal that weighs more than two tons is not an easy one.

With the relocation, every mode had to be carefully thought out, and executed with precision. The anticipation of the day weighed heavy, and it was visible on the faces of the keepers, operations crew and veterinary staff who work at the Phoenix Zoo.

"He looks good. He looks comfortable in there. He's relaxed, and he stood up. He's just nervous with all the strangers, I think, around. We'll get him unloaded as quickly as possible," said Gary West, Vice President of Animal Health & Collections.

"It's nerves. It's the excited nerves. The hardest part is always watching the crate drive on the forklift for me," said Senior Keeper of Hoof Stock Paige McNickel. "Once the crate is there, and we start letting him out, then that's when the excitement happens."

"We have been preparing actively for the past year, but for about three years, we’ve known that this recommendation has been out," said McNickel.

The driver who transported Howard travelled over 2,200 miles (ca. 3,541 km), totaling over 31 hours to bring the rhino to Phoenix.

It all starts in Florida 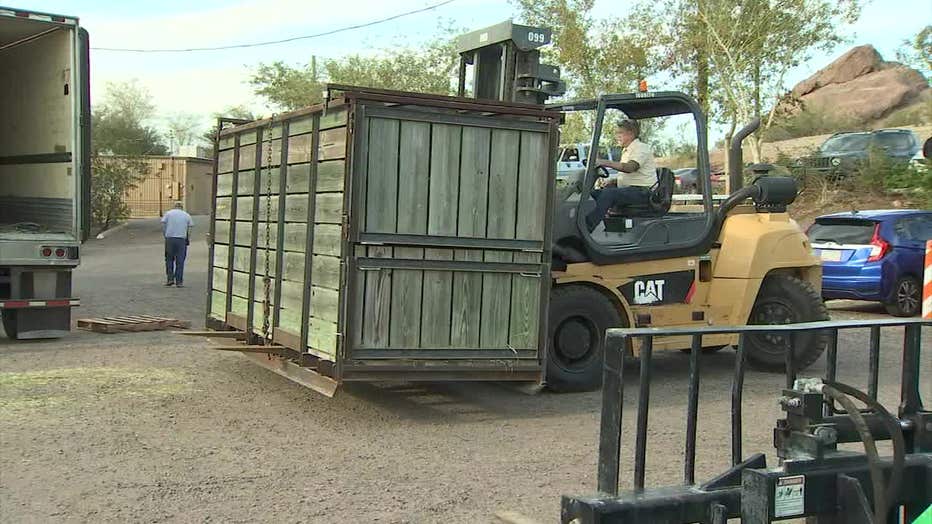 Howard's journey to Phoenix began at a zoo in Florida weeks ago, when keepers as Brevard Zoo in Melbourne, Florida began training him.

"So you introduce him to this new space, first of all, so the large crate that he was shipped in is placed adjacent to his stall," said Sebastian Carcano, Howard's keeper at Brevard Zoo.

Carcano said Howard took to the crate the first day.

"He has access to the crate a few hours each day," said Carcano. "The next two steps are the ones that are a little bit difficult, which is getting him to be calm, spending long amounts of time inside the crate, and to achieve that, really, you just feed them their diet. And then the hardest part, which is securing the door behind him once he is inside, and making sure that he is calm when that happens."

This is not the first time Howard was moved. He was moved from White Oak Conservation, where he was born, to Brevard Zoo in 2003.

"He likes to interact with people. He likes to be around keepers. He enjoys tactile stimulation, so scratch his head, rub, stuff like that is his favorite. He’s very gentle."

While Howard was a favorite at Brevard Zoo, he was not breeding with the females there, and keepers say the specie's survival plan decided a move would be best. 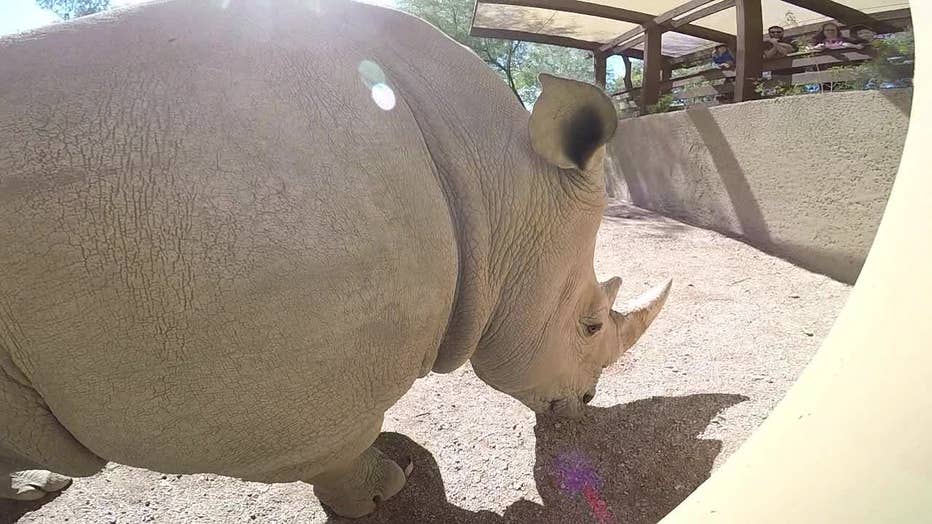 LouLou, who came to the Phoenix Zoo three years ago, will get a new companion.

"I’ve been here 20 years. This will be the first time I’ve introduced rhinos together, so I’m excited for the opportunity. I’m really excited for LouLou to have a friend and for everybody to see them together, because I think that’s going to change her behavior a little," said McNickel.

The rhino exhibit at the Phoenix Zoo was modified, in an effort to accommodate both animals. LouLou and Howard will be introduced slowly.

The ground crew that moved Howard's crate into the Rhino exhibit took their time, using two massive forklifts to maneuver Howard safely into his new home, carefully removing the bars that held Howard in his crate until he was able to back out and into the shoot that led to the rhino night house.

"The second time, he walked right in," said McNickel. "He smelled the food. He had hay and pellets inside."

Staff at the Phoenix Zoo shared video of Howard, showing him calm enough to take a drink. It's a good sign, they say, that Howar will settle into his new home with ease. 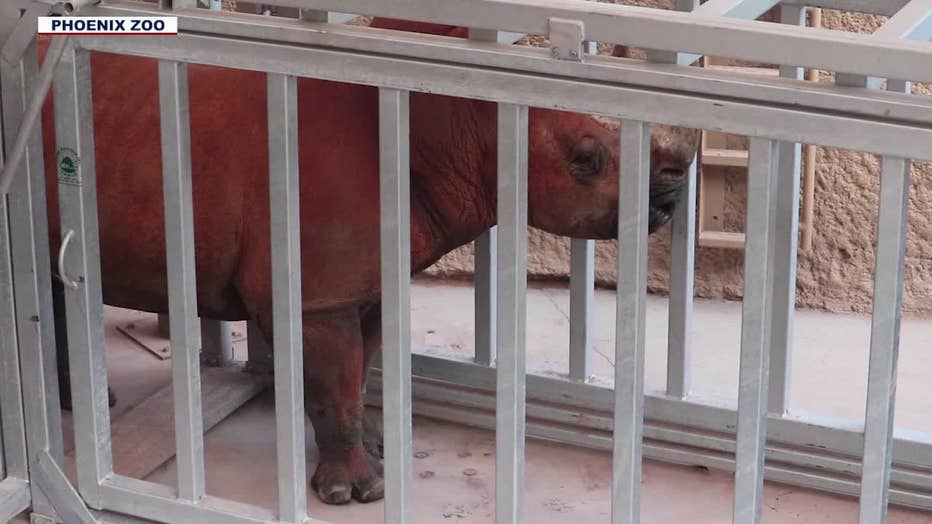