Three people were dead, including the gunman, after a shooting at a shopping center in Bend, Oregon, on Sunday, August 29, local police said. (Credit: Dave Felton via Storyful)

PORTLAND, Ore. - An employee who was killed in a shooting at a Safeway supermarket in Bend, Oregon, attacked the gunman in the produce section and tried to disarm him, likely preventing more deaths, authorities said Monday.

The 66-year-old employee, identified as Donald Ray Surrett Jr., of Bend, was hailed as a hero by police at a news conference. Surrett and a customer, 84-year-old Glenn Edward Bennett, also of Bend, were killed Sunday evening. Two others were injured.

"Mr. Surrett engaged with the shooter, attempted to disarm him and may very well have prevented further deaths. Mr. Surrett acted heroically turning this terrible event," Bend Police spokeswoman Sheila Miller said at a news conference as she struggled against tears.

Police said Monday the shooter died of a self-inflicted gunshot wound and was near an AR-15-style weapon and a shotgun. Police identified the gunman as Ethan Blair Miller, 20, of Bend.

The gunman lived in an apartment complex behind The Forum Shopping Center. Witnesses said he began shooting Sunday evening as soon as he left the complex and continued firing as he entered the shopping complex's parking lot and then went into the Safeway. 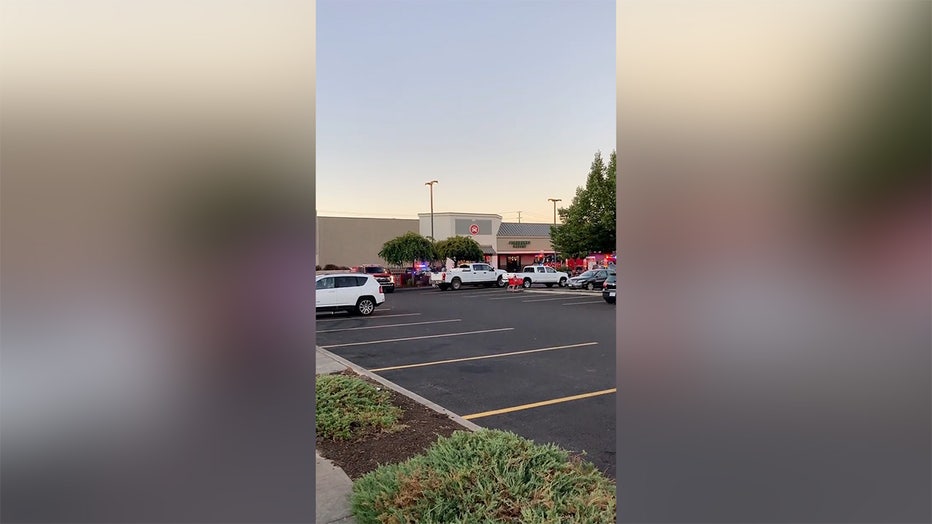 FILE - Still image taken from video at the scene of a fatal shooting at a Safeway supermarket in Bend, Oregon. (Dave Felton via Storyful)

Bennett was killed at the store's entrance, police said, and the shooter then moved through the aisles "spraying shots" from the assault rifle until Surrett confronted him in the back of the store in the produce section. The entire incident — from the first 911 calls to officers discovering the suspect dead in the store — unfolded in four minutes, Miller said.

Police entered the supermarket from the front and rear as shots were still being fired.

Bend Mayor Pro Tem Anthony Broadman said Americans "need to guard against the cynicism of thinking of these attacks on order and peace as regular, unavoidable things. I won’t accept that."

"We know that in the face of the kind of chaos that we saw last night, we had brave first responders, brave citizens, people willing to stand up for their neighbors," he added.

Authorities later found three Molotov cocktails and a sawed-off shotgun in the shooter's car. The Oregon State Police bomb squad was called in to sweep the store, the car and the suspect's apartment for explosives, authorities said, forcing the evacuation of eight surrounding apartments on Monday morning.

Miller said reports that there was a second shooter were not true. She said reports of other shootings around Bend at the same time were also false.

Authorities are seeking a search warrant to comb through online materials on an unspecified number of digital devices they found at the shooter's apartment but declined to comment on reports that the suspect posted his plans online in advance. Bend police are working with the Bureau of Alcohol, Tobacco, Firearms and Explosives to determine where the suspect got his weapons and if he did so legally, Miller said.

"We are aware that the shooter may have posted information online regarding his plan. We’re investigating this," she said. "We have no evidence of previous threats or prior knowledge of the shooter. We received information about the shooter’s writings after the incident had taken place. And the shooter has no criminal history in the area."

Those who were in the Safeway on Sunday described panic and chaos as the shooting unfolded.

Josh Caba, a shopper in the store, told KTVZ he was with his four children when he heard multiple shots.

"I immediately turned to my children and said, ‘Run!’ People were screaming," Caba told the news outlet. "It was a horrifying experience."

Oregon's elected leaders reacted to the shooting Monday with pledges to fight for more gun control.

"America cannot just shrug its shoulders at another mass shooting with loved ones grieving the loss of family and friends," U.S. Sen. Ron Wyden, a Democrat, tweeted.

Gov. Kate Brown, a Democrat, said in a statement that the shooting was one of several in Oregon over weekend and that "Oregonians deserve to be safe from gun violence."

Oregon residents will vote in November on one of the strictest gun-control measures in the nation. If passed, Measure 114 would ban large capacity magazines over 10 rounds — except for current owners, law enforcement and the military — and require a permit to purchase any gun.

To qualify for a permit, an applicant would need to complete an approved firearm safety course, pay a fee, provide personal information, submit to fingerprinting and photographing and pass a criminal background check. The state police would create a firearms database.