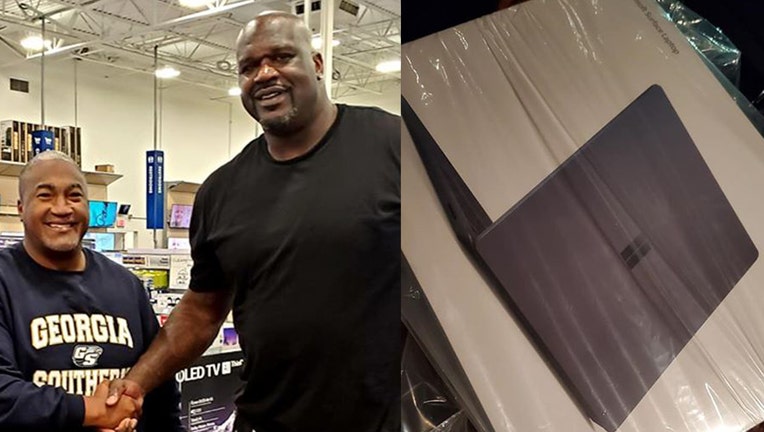 The former NBA player picked up the tab for a Georgia family's new laptop after a touching conversation at Best Buy.

According to his Facebook post, Patrick Martin and someone else named Mo were shopping at a McDonough Best Buy store for a new laptop when he ran into Shaq.

During their conversation, Martin says they "gave our condolences for his sister and Kobe." The interaction came just days after his friend, NBA star Kobe Bryant, was killed along with 8 others in a helicopter crash. Shaq's sister, Ayesha Harrison-Jex, died last year after a battle with cancer at the age of 40.

After their conversation, Martin says he walked away to search for a laptop. Moments later, O'Neal approached them and offered to pay for it.

"We walked off, then Shaq comes to us and says, 'I like yall, so get the nicest one in here and I'll pay for it,'" Martin wrote on Facebook.

O'Neal is known for his generous acts of kindness. He recently announced that he would be donating all proceeds from his annual Super Bowl "Fun House" event in Miami to the Kobe and Vanessa Bryant Foundation and the families of those killed in Sunday's helicopter crash.