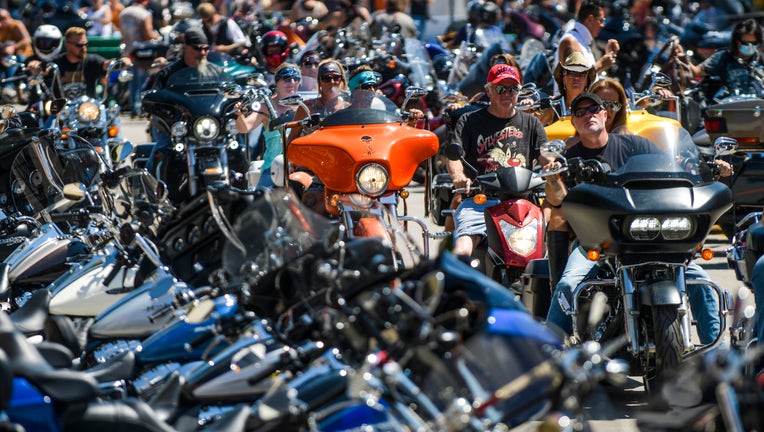 STURGIS, SD - AUGUST 07: Motorcyclists ride down Main Street during the 80th Annual Sturgis Motorcycle Rally on August 7, 2020 in Sturgis, South Dakota. While the rally usually attracts around 500,000 people, officials estimate that more than 250,000

SAN DIEGO, Ca. (FOX 9) - A study from San Diego State University shows 19 percent of the 1.4 million new coronavirus cases in the United States over the last month can be traced back to the Sturgis Motorcycle Rally in South Dakota in August.

The study from the University’s Center for Health Economics and Policy Studies attributes 266,796 coronavirus cases to the 10-day event, which more than 460,000 people attended, according to local officials.

The Minnesota Department of Health says 51 Minnesotans contracted COVID-19 at Sturgis, three of which were hospitalized and one who died.

In the study, researchers concluded the rally generated public health costs of about $12.2 billion.

Also of note in the study is the contrast of Sturgis to other large gatherings, including Black Lives Matter protests held across the country during the same timeframe.

"These results suggest that in contrast to prior large gatherings that have been studied (i.e., Tulsa and BLM protests), in the case of Sturgis, the local resident population appeared to participate in the events," the study says. "This raises the possibility that the local population may be at risk for COVID-19 spread, especially if mitigating strategies (i.e., mask-wearing, interacting closely with only household members, avoiding crowds) were not undertaken."

The researchers concluded the Black Lives Matter protests did not have as large of an effect on public health as some expected.

"We conclude that predictions of population-level spikes in COVID-19 cases from Black Lives Matter protests were too narrowly conceived because of failure to account for non-participants' behavioral responses to large gatherings," the study reads.