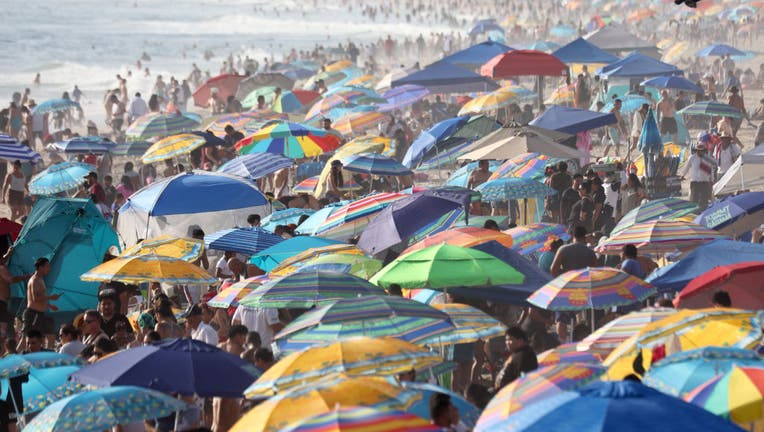 SANTA MONICA, CALIFORNIA - SEPTEMBER 04: People gather on Santa Monica beach amid an intense heat wave in Southern California on September 4, 2022 in Santa Monica, California. The National Weather Service issued an Excessive Heat Warning for most of

You don’t need a meteorologist to tell you it was hot during the past summer, but a preliminary review of temperatures shows the country is in the running for one of the hottest seasons ever on record.

Data from the Southeast Regional Climate Center (SERCC) showed the average temperature was around 74 °F, which is very near records set back during the summer of 2021 and the 1936 Dust Bowl.

A series of heatwaves across the country helped communities in all four regions reach and smash local, all-time records.

BLOWN AWAY: EVERY STATE REPORTS WIND DAMAGE FOR 2ND MONTH IN A ROW

Hundreds of other communities across nearly every state reported experiencing one of their top ten warmest summers on record.

The "Route Fire" sparked around 12:20 p.m. near the northbound lanes of the 5 Freeway just north of Lake Hughes Road, according to Angeles National Forest officials. A short time later, officials announced the freeway was closed in the area as crews battle the blaze. At last check, the fire has extended to about 250 acres, according to the LASD's Santa Clarita Valley Sheriff's Station. EVACUATION ORDERS The Route Fire has prompted a mandatory evacuation order to go into effect for the following areas: Paradise Mobile Estates All buildings and structures south of Templin Highway along Upper Ridge Route Road All the impacted residents are being ordered to evacuate north of the area. The majority of Southern California is under an Excessive Heat Warning through Labor Day weekend. In addition, the brutal heat wave prompted a statewide Flex Alert from 4 p.m. to 9 p.m. Wednesday.

The National Oceanic and Atmospheric Administration is still reviewing data for the entire country and is expected to release its findings on September 9 on where the 2022 summer season ranks on the warm scale.

If the phrase ‘record heat’ sounds like a broken record, it is. If temperature readings for 2022 verify, it will mean the last three summers have all ranked in the top five for all-time warmest.

According to NOAA, U.S. summers are growing warmer by a rate of 1.23 °F every century, meaning chances will only increase that future seasons will rank amongst some of the warmest ever.

The only region that saw temporary relief from the summer’s extended heat was the Desert Southwest, where a significant monsoon season produced plenty of cloud cover and heavy rains.

The FOX Forecast Center said most of the cities that saw a cooler summer were impacted by plenty of moisture.

The same general patterns that impacted the lower 48 over the summer are expected to continue into fall.

NOAA’s Climate Prediction Center believes the entire country is in store for a warm season that will have many wondering when relief from the heat will be on the way.