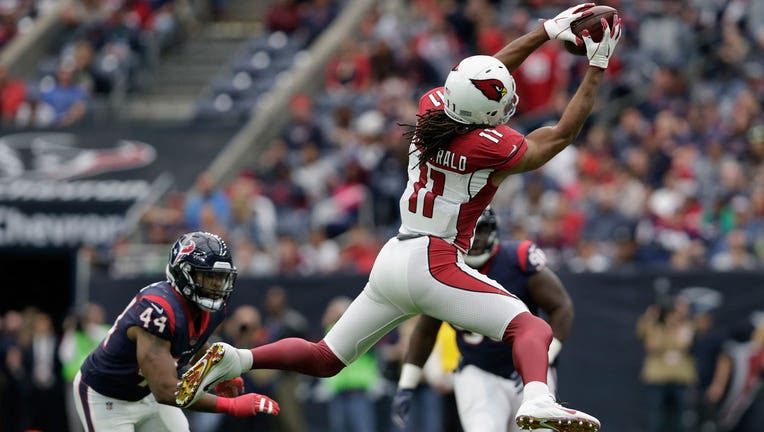 HOUSTON (AP) - DeAndre Hopkins admitted that Andre Johnson being at NRG Stadium on Sunday to become the inaugural member of the Houston Texans Ring of Honor gave him a little boost in a 31-21 win over the Arizona Cardinals.

"Andre is always inspiring," Hopkins said. "Just his presence, being out there before the game ... for him to have this day, it definitely brought a spark to some people."

Hopkins finished with four receptions for 76 yards and a touchdown as the Texans (4-6) scored two fourth-quarter touchdowns to secure the victory to snap a three-game losing streak.

Johnson spent 12 seasons in Houston and is the team's leader in yards receiving (13,597), receptions (1,012) and touchdown receptions (64). He was given a red jacket and feted with a halftime ceremony attended by dozens of former Texans.

Hopkins played with Johnson in his final two seasons in Houston and still considers him a mentor even though he's now firmly placed himself among the NFL's top receivers.

Hopkins said that Johnson, who endured two 2-14 seasons in his time in Houston, spoke to the team on Saturday about navigating through tough times such as what the Texans have dealt with this season.

"Just block out everybody around us," Hopkins said. "Even though everybody counted us out to win this division or to do what we want. So, just basically block out the noise and focus on the goal ahead."

Cardinals receiver Larry Fitzgerald was happy to be in Houston to see Johnson honored. He called him a longtime friend and said he believes he deserves to be in the Hall of Fame. The veteran receiver also raved about the work he did in aiding the development of Hopkins.

"He did a great job of mentoring Hopkins and now you see how he's one of the top guys in the game," Fitzgerald said. "He's a special, special talent. He's got a knack for making those tough catches week in and week out."

Here are some things to know about the Cardinals-Texans game.

D'Onta Foreman scored his first two NFL touchdowns on runs of 3 and 34 yards in the fourth quarter before being carted off with an ankle injury. But he also made a statement before the game, showing up to the stadium wearing a Deshaun Watson jersey with his street clothes.

"To be honest I just felt like it was a fashion statement really," he said with a laugh. "I just wanted to go viral really. That was it."

Then he got serious noting that he wanted to do something as a nod to Watson, who is out for the season with a knee injury.

"All jokes aside, it was just him being out and I just really wanted to show him some support and come out here and show him that we care about him and care about everything he's going through," Foreman said.

Foreman said he wasn't sure how serious his injury was, but that he expected to know more on Monday.

Fitzgerald hasn't displayed any signs of slowing down despite being in his 14th NFL season. The 34-year-old had another good game on Sunday, finishing with 91 yards receiving and a touchdown in the loss. The performance moved him past Tony Gonzalez (15,127) for the fifth-most receiving yards in NFL history with 15,157 yards.

Houston defensive end Jadeveon Clowney continues to carry the defense with J.J. Watt and Whitney Mercilus out for the season with injuries. On Sunday, the top overall pick in the 2014 draft had two sacks to give him a career-best eight this season.

He also tackled Adrian Peterson for a 1-yard loss on fourth-and-1 in the fourth quarter to help Houston secure the win and added three quarterback hits. Clowney has 15 tackles for losses this season and Sunday was his career-high fourth straight game with a sack.

"This game gave us a spark as a confidence builder for so many guys," he said. "We needed this win, especially at home."

The Texans took a 7-0 lead when Lamar Miller grabbed a 7-yard pass from Tom Savage before falling out of bounds early in the second quarter. Miller, a sprinter at Miami, then started a relay baton celebration where he ran before pretending to hand off to Hopkins, who passed it on to Braxton Miller, who finished the bit by handing it off to Bruce Ellington.

Miller said the idea came from Hopkins and that they didn't rehearse it.