A look at Trump’s law and order push

President Trump said he will send federal agents into some cities to help combat rising crime, part of a larger strategy amid the pandemic and upcoming election.

WASHINGTON - President Donald Trump announced Wednesday that he will send federal agents into Chicago and Albuquerque, New Mexico, to help combat rising crime, expanding the administration’s intervention in local enforcement as he runs for reelection under a “law-and-order” mantle.

Using the same alarmist language he has employed to describe illegal immigration, Trump painted Democrat-led cities as out of control and lashed out at the “radical left," even though criminal justice experts say a spike in violence in some cities defies easy explanation. 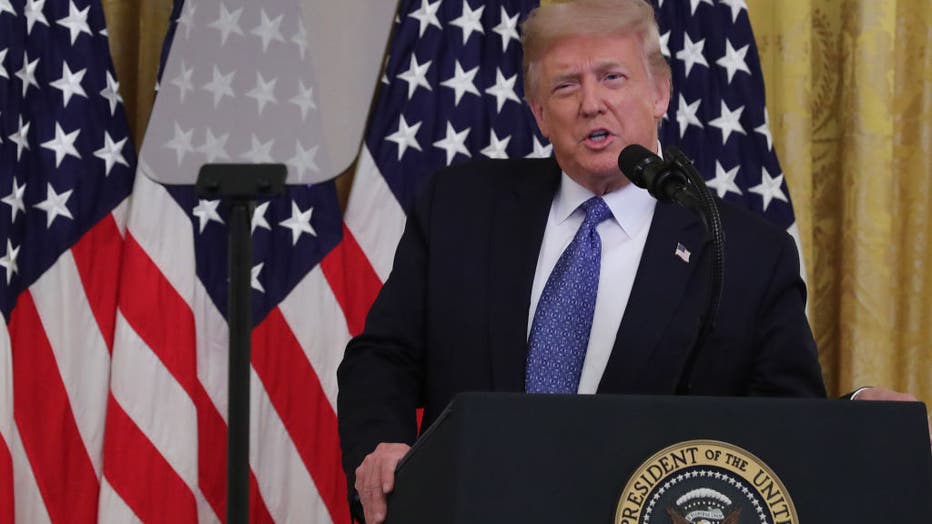 “In recent weeks there has been a radical movement to defund, dismantle and dissolve our police department,” Trump said at a White House event, blaming the movement for “a shocking explosion of shootings, killings, murders and heinous crimes of violence."

The decision to dispatch federal agents to American cities is playing out at a hyperpoliticized moment when Trump is grasping for a reelection strategy now that the coronavirus has upended the economy and immigration is largely at a standstill. With less than four months until Election Day, Trump has been warning that violence will worsen if his Democratic rival Joe Biden is elected in November and Democrats have a chance to make the police reforms they seek. 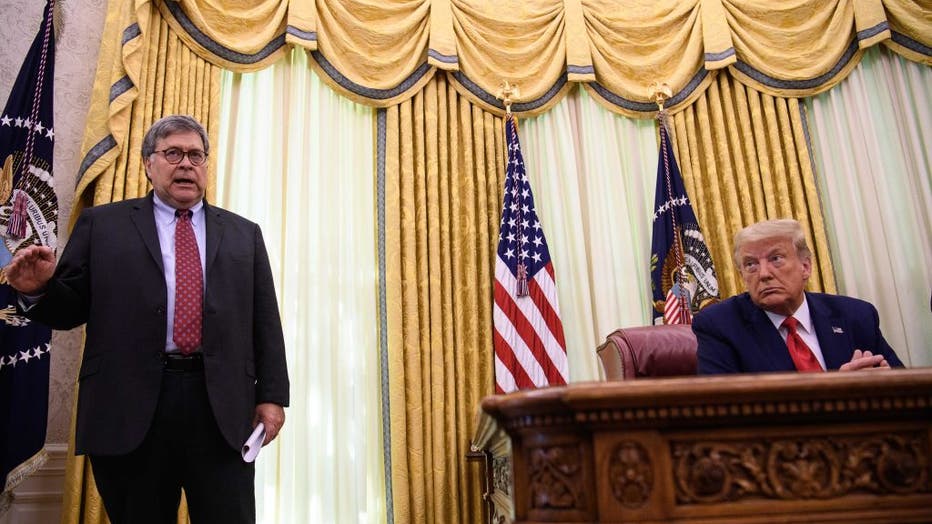 President Donald Trump listens to Attorney General Bill Barr in the Oval Office at the White House after receiving a briefing from top law enforcement officials on operations against the MS-13 gang in Washington, D.C., on July 15, 2020. (Photo by NIC

Crime has surged in some cities like Chicago, New York and Philadelphia before any major policing overhauls could be made. In trying to explain violence in some cities, experts point to the unprecedented moment in the country — a pandemic that has killed more than 140,000 Americans, historic unemployment, stay-at-home orders, a mass reckoning over race and police brutality, intense stress and even the weather. And compared with other years, crime in 2020 is down overall.

Local authorities have complained that deploying federal agents to their cities has exacerbated tensions on the streets, while residents have accused the government of violating their constitutional rights. Civil unrest in Portland, Oregon, only escalated after federal agents were accused of whisking people away in unmarked cars without probable case.

Hundreds of federal agents have been sent to Kansas City, Missouri, to help quell a record rise in violence after a 4-year-old boy's shooting death. Sending federal agents to help localities is not uncommon. Barr announced a similar surge effort in December for seven cities that had seen spiking violence.

Usually, the Justice Department sends agents under its own umbrella, like agents from the Bureau of Alcohol, Tobacco, Firearms and Explosives or the Drug Enforcement Agency. But this surge effort will include at least 100 Department of Homeland Security Investigations officers working in the region who generally conduct drug trafficking and child exploitation investigations.

DHS officers have already been dispatched to Portland and other localities to protect federal property and monuments as Trump has lambasted efforts by protesters to knock down Confederate statutes.

The spike in crime has hit some cities hard at a time when their resources were already stretched thin from the pandemic. But local leaders, including Chicago Mayor Lori Lightfoot, initially rejected the move to send in federal forces.

Lightfoot later said she and other local officials had spoken with federal authorities and come to an understanding. Chicago has seen 414 homicides this year, compared with 275 during the same period in 2019. A barrage of gunfire left 15 people dead on Tuesday near a funeral home on the South Side.

“I’ve been very clear that we welcome actual partnership,” the Democratic mayor said Tuesday after speaking with federal officials. “But we do not welcome dictatorship. We do not welcome authoritarianism, and we do not welcome unconstitutional arrest and detainment of our residents. That is something I will not tolerate.”

In New Mexico, meanwhile, Democratic elected officials were cautioning Trump against sending in federal agents, with U.S. Sen. Martin Heinrich calling on Bernalillo County Sheriff Manny Gonzales, who was at the White House on Wednesday, to resign.

“Instead of collaborating with the Albuquerque Police Department, the Sheriff is inviting the President’s stormtroopers into Albuquerque,” the Democratic senator said in a statement.

Acting Homeland Security Secretary Chad Wolf drew a distinction between the mission in Portland — to protect federal property — and the surges in Kansas City, Chicago and Albuquerque to aid in stopping violence.

Christopher David is uncomfortable with his newfound fame as the subject of an online video and news coverage. David, whose bones were broken, says the focus should be on Black Lives Matter.

Two dozen agents will be sent to Albuquerque, and the administration made available $9.4 million for 40 new Albuquerque officers.

In Kansas City, the top federal prosecutor said any agents involved in an operation to reduce violent crime in the area will be clearly identifiable when making arrests, unlike what has been seen in Portland. Hundreds of extra agents have been sent.

“These agents won’t be patrolling the streets,” U.S. Attorney Timothy Garrison said. “They won’t replace or usurp the authority of local officers.”

Operation Legend — named after 4-year-old LeGend Taliferro, who was fatally shot while sleeping in a Kansas City apartment last month — was announced July 8. There have been more than 200 arrests.

“My one and only child who fought through open heart surgery at four months is gone due to senseless gun violence," LeGend's mother, Charon Powell, said at the White House. "Children are supposed to be our future and our son didn’t make it to kindergarten.”

Associated Press writers Michael Tarm in Chicago and Michael Balsamo in Washington contributed to this report.