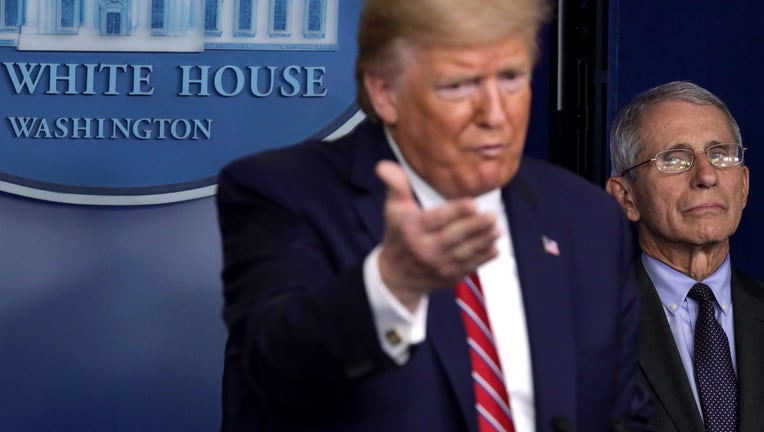 WASHINGTON, DC - MARCH 20: U.S. President Donald Trump speaks as Director of the National Institute of Allergy and Infectious Diseases Dr. Anthony Fauci looks on during a news briefing on the latest development of the coronavirus outbreak in the U.S.

WASHINGTON, D.C. - In a clash of gut instinct versus science, President Donald Trump and the government's top infectious disease expert, Dr. Anthony Fauci, are politely but publicly sparing over whether a malaria drug would work to treat people with coronavirus disease.

Trump is clinging to his feeling that a malaria drug widely available could be the answer-in-waiting to an outbreak spreading around the nation, shutting down major parts of the economy, and posing the biggest challenge he has faced as president. Calmly and quietly, Fauci insists that the science is not yet there to validate Trump's hope. Neither man directly challenged the other.

The extraordinary scene played out on national television both Friday and Saturday during White House briefings on the outbreak. Anxious for answers, Americans heard conflicting views.

Reporters asked both men -- first Fauci, then Trump -- if a malaria drug called hydroxychloroquine could be used to prevent COVID-19, the disease caused by the virus. A day earlier, when Fauci wasn't with him at that briefing, Trump had called attention to the drug.

On Friday, Fauci took the reporter's question and got right to the point.

"The information that you're referring to specifically is anecdotal," Fauci added firmly. "It was not done in a controlled clinical trial, so you really can't make any definitive statement about it."

Hydroxychloroquine and a similar drug -- chloroquine -- are sold around the world under a variety of brand and generic names. They can be prescribed off-label by doctors in the United States. They may interfere with the coronavirus being able to enter cells, and some scientists have reported possible encouraging signs in test-tube and other small studies.

Fauci on Friday went on to explain that the Food and Drug Administration is looking for a way to make the drug available for emergency use, but in a manner that gives the government data about whether it's safe and effective. Fauci is director of the National Institute of Allergy and Infectious Diseases at NIH and in more than 30 years has handled HIV, SARS, MERS, Ebola and now the new coronavirus.

Currently, there is no medicine specifically approved for treating COVID-19.

But Trump stuck to what his gut was telling him. As the two men took turns at the podium, Trump said he disagreed with the notion that there is no magic drug for the coronavirus disease. "Maybe and maybe not," he said. "Maybe there is, maybe there isn't. We have to see."

He struck an upbeat note, while trying not to directly challenge Fauci.

"I think without seeing too much, I'm probably more of a fan of that," he said, referring to the malaria drug. "And we all understand what the doctor said is 100% correct."

Then the president added, "It's a strong drug. So, we'll see."

That same mixed-message dynamic was on display during Saturday's White House briefing -- this time with both men publicly acknowledging their clashing stances. Prior to the briefing Trump tweeted about a preliminary French study suggesting that hydroxychloroquine plus azithromycin, a common antibiotic, might be an effective treatment for COVID-19. During the briefing, Trump doubled down on his support for the malaria drug, saying it would be distributed for use while Fauci remained respectfully skeptical.

"I feel, as the expression goes, what do we have to lose," Trump said. "Tony would like, he would like samples done in a certain way. I understand that, too. Many doctors agree with that. We don't have much time. We have a lot of very sick people right now."

Fauci called the hydroxychloroquine evidence "anecdotal" and made it clear that wasn't how the science works.

"If you really want to definitively know if something works, you've got to do the kind of trial where you get the good information," he said.

Fauci compared the current speculation to the early days of medical trial-and-error during the AIDS crisis when multiple anecdotal treatments were floated, "until we finally developed drugs that were knockout drugs that were safe and that were effective."

For most people, the virus causes only mild or moderate symptoms, such as fever and cough. For some, especially older adults and people with existing health problems, it can cause more severe illness, including pneumonia.

Fauci has a track record of being the fact-based counterpoint to the Trump administration's upbeat assessments of the coronavirus outbreak. For much longer than that, he's specialized in the same calm and persistent repetition of the information he thinks his audience -- whether the public or physicians -- needs to know.

Weeks ago, after Fauci said that even with all deliberate speed a vaccine could take a year to 18 months, Trump told a political rally one could be ready "relatively soon."

As administration officials repeatedly assured the public that coronavirus tests were rapidly becoming available, Fauci at a congressional hearing said the lack of widespread testing was "a failing" of the system.

Although Fauci has publicly supported Trump's travel restrictions to try to keep the virus out, he warned the worst was coming even as Trump suggested the crisis was under good control.

On Saturday, with his public dissonance with the president now becoming a regular feature of the White House briefings, Fauci worked to find some sort of middle ground.

"The president is talking about hope for people and it's not an unreasonable thing," Fauci said. "I've got to do my job as a scientist and others have other things to do."