People from California, Michigan, Canada and beyond are calling Ulster County, New York, to see where they can get this sticker.

ULSTER COUNTY, N.Y. - An "I Voted" sticker design contest for a New York county's Board of Elections is gaining national attention, and it’s all thanks to the artwork of a 14-year-old boy.

For the second year in a row, the Ulster County Board of Elections asked students to submit design ideas for "I Voted" stickers that will be handed out to voters for the general election Nov. 8. Last year, the county’s two elections commissioners selected five finalists for the community to vote on, but this year they "had a hunch" a sixth entry would be a hit.

As of Friday afternoon, 14-year-old Hudson Rowan’s design — a multi-colored human head atop a spider — had more than 130,000 votes. The image has garnered more votes than the county received in the 2020 election, its highest ever voter turnout. Last year’s contest winner got about 500 votes, Quigley said.

"I think the best way to summarize it was, this is sort of how everybody’s feeling about politics right now," John Quigley, a Board of Elections commissioner in Ulster County, told FOX TV Stations. "He just wasn’t looking to do the traditional red, white and blue theme, so he came up with something completely different." 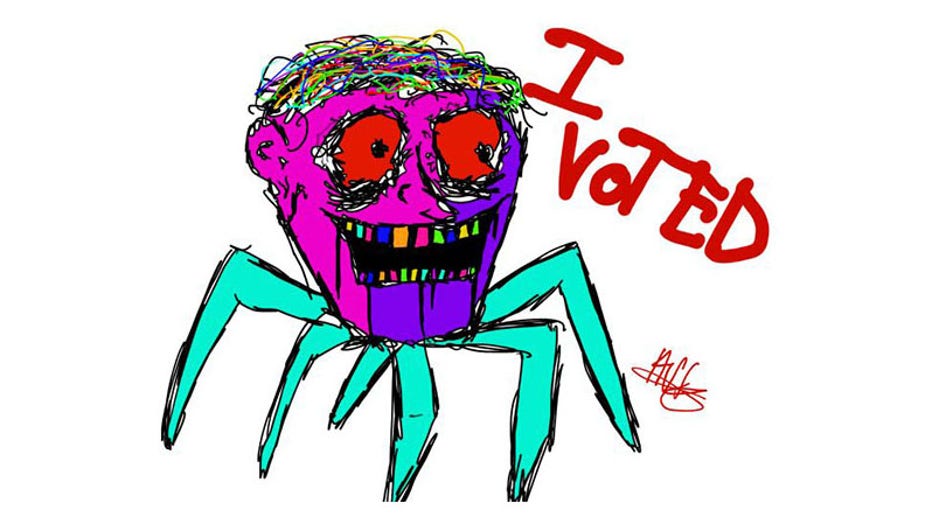 Board of Elections Commissioner Ashley Dittus said they’ve fielded calls from people in California, Canada, Michigan and beyond asking for a sticker. Others have tagged their own local election boards on Twitter and suggested they follow Ulster County’s lead.

"It kind of reminds me when I go to vote and maybe an inspector can’t find my name in the book, or I don’t know what line I’m supposed to go in," Dittus said. "I think a lot of people can identify with ... this little creature; it kind of reminds me of a little voter."

Because the sixth design has become so wildly popular, any of the other five designs that get more than 1,500 votes will be distributed as "I Voted" stickers for the upcoming Aug. 23 primary.

Dittus said all the attention has been great reminder of the importance of voting and getting involved.

"In Ulster County and all across the country, working and helping out at the poll sites is important, and you get to be the people who get to hand out the stickers," she said. "If you’re in Ulster County, reach out to us or just reach out to your local officials and get involved."