Carolina Sanchez breaks down the coronavirus

The Fox 26 host provides details on the coronavirus outbreak.

NEW YORK (AP) - The U.S. death toll from the coronavirus climbed past 3,500 Tuesday, eclipsing China's official count, as New York's mammoth convention center started taking patients to ease the burden on the city's overwhelmed health system and the tennis center where the U.S. Open is held was being turned into a hospital.

Also, CNN anchor Chris Cuomo, the brother of New York Gov. Andrew Cuomo, disclosed that he has become infected and has quarantined himself in his basement.

Elsewhere around the world, hard-hit Italy reported that the infection rate appears to be leveling off and new cases could start declining, but that the crisis is far from over. Spain, too, struggled to fend off the collapse of its hospital system. Vladimir Putin's Russia moved to crack down on quarantine violations and “fake news” about the outbreak. And China edged closer to normal as stores in the epicenter city of Wuhan began reopening.

Worldwide, more than 800,000 people have been infected and over 39,000 people have died, according to a tally kept by Johns Hopkins University. Italy and Spain accounted for half the deaths, while the U.S. had around 3,550 by midday, eclipsing China's official toll of about 3,300.

New York was the nation's deadliest hot spot, with about 1,550 deaths statewide, the majority of them in New York City.

A Navy hospital ship with 1,000 beds that docked in New York on Monday was expected to begin accepting non-coronavirus patients on Tuesday. A 1,000-bed emergency hospital set up at the Javits Convention Center began taking patients Monday night. And the Billie Jean King USTA National Tennis Center was being transformed into a hospital.

The crisis became personal for the governor with word that his brother was infected. Chris Cuomo tweeted that he suffered fever, chills and shortness of breath but will continue broadcasting from his basement.

On Monday, the governor pleaded for help from volunteer medical workers, and close to 80,000 former nurses, doctors and other professionals were already said to be stepping forward.

MAP: This is where there are confirmed coronavirus cases in the US and around the world

New York City sought to bring in 250 out-of-town ambulances and 500 paramedics and emergency medical technicians to help its swamped EMS system. The city's ambulances are responding to about 6,000 calls a day, or 50% more than average, authorities said. Fire Commissioner Daniel Nigro said a five-day stretch last week was the busiest in the history of the city's EMS operation.

Figures on deaths and infections around the world are supplied by government health authorities and compiled by Johns Hopkins. But the figures are regarded with skepticism by public health experts because of different counting practices, a lack of testing in places, the numerous mild cases that have been missed, and perhaps government efforts to downplay the severity of the crisis.

For example, Italy’s emergency coordinator, Domenico Arcuri, acknowledged that officials don’t have a handle on how many people outside of hospitals are contracting the virus and how many of those are dying at home or in nursing homes.

Still, there was a glimmer of hope in Italy: Dr. Silvio Brusaferro, the head of Italy's national institutes of health, said that three weeks into a national lockdown, the hardest-hit country in Europe is seeing the rate of new infections level off.

“The curve suggests we are at the plateau," he said. "We have to confirm it, because arriving at the plateau doesn’t mean we have conquered the peak and we’re done. It means now we should start to see the decline if we continue to place maximum attention on what we do every day.”

With the country's health care system buckling under the pressure, an intensive care field hospital, built in just 10 days, was unveiled at the Milan fairgrounds.

“We made a promise and we kept it,” said the head of the project, former civil protection chief Guido Bertolaso, who ended up catching the virus while on the job and had to work from his hospital bed.

In Russia, lawmakers approved harsher punishments, including prison of several years, for violating quarantine rules and spreading misinformation. The chief doctor at Moscow’s top hospital for coronavirus patients said he tested positive for the virus, a week after shaking hands with Putin. 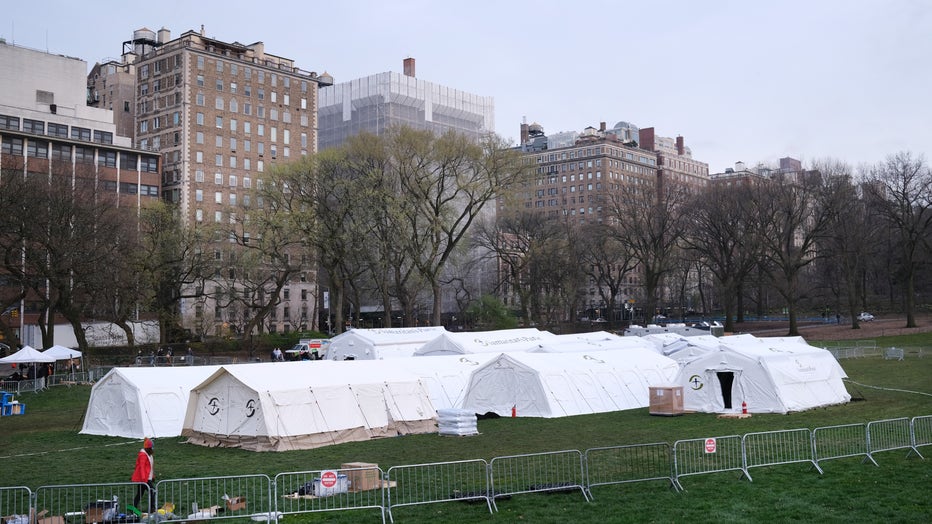 Dozens of hotels across Spain have been turned into recovery rooms for patients in less-serious condition, and authorities are building field hospitals in sports centers, libraries and exhibition halls.

RELATED: Social distancing: What to do and what not to do to slow the spread of COVID-19

A 12-year-old girl became the youngest person to die in Belgium, though it was not disclosed whether she suffered from any underlying condition.

In Florida, the Holland America cruise line pleaded with state officials to let two ships dock and carry off the sick and the dead. But Gov. Ron Santis said on Fox News: “We cannot afford to have people who are not even Floridians dumped into South Florida using up those valuable resources."

Dozens on one of the ships have reported flu-like symptoms, and four people have died.

For most people, the coronavirus causes mild or moderate symptoms, such as fever and cough. But for others, especially older adults and people with existing health problems, it can cause severe symptoms like pneumonia.

China on Tuesday reported just one new death from the coronavirus and 48 new cases, claiming that all new infections came from overseas. In Wuhan, people were ready to “revenge shop” as the Chinese city that was once at the center of the outbreak reopened.

Still, Dr. Takeshi Kasai, the World Health Organization's regional director for the Western Pacific, cautioned, however, that the risk in Asia and the Pacific “will not go away as long as the pandemic continues.”

“This is going to be a long-term battle and we cannot let down our guard," Kasai said. "We need every country to keep responding according to their local situation.”

In Serbia, Hungary and other nations, concerns were rising that populist leaders were using the situation to seize more power and silence critics.

“A state of emergency — wherever it is declared and for whatever reason — must be proportionate to its aim, and only remain in place for as long as absolutely necessary," said human rights expert Ingibjörg Sólrún Gísladóttir of the Organization for Security and Cooperation in Europe.