Coronavirus pandemic could cause multitrillion-dollar decline in economic output

The grim forecast came from a recent government report.

LOS ANGELES - Private employers slashed 2.7 million jobs in May as the coronavirus-induced lockdown devastated the U.S. economy and labor market, according to the ADP National Employment Report released Wednesday.

The number was well below the 9 million job losses forecast by Refinitiv economists.

"This number is so much below expectation, or what you would get if you built up from the claims number, that I wonder about it," said Kevin Hassett, a member of President Trump's economic team. "I'll go back to my desk and study it."

He continued: "The number is so good, it's such good news, that I really have to dig deep into it and see if there's not something funny going on, because it's pretty far removed from what we'd get if we just added up the claims data and so on from the last survey."

The losses were most pronounced at large businesses, which shed more than 1.6 million jobs in May. Medium businesses lost 722,000 jobs, and small businesses reported a drop of 435,000. 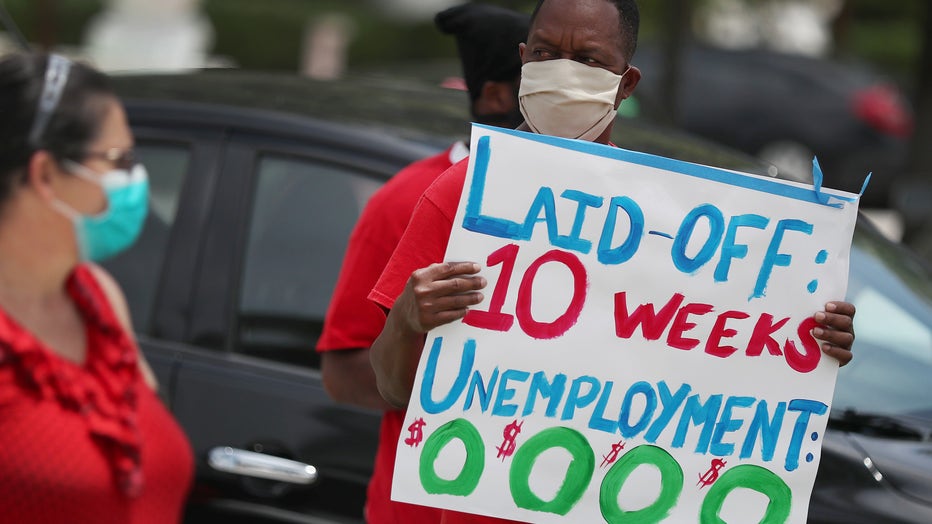 A man joins in a protests against the unemployment system on May 22, 2020 in Miami Beach, Florida. (Photo by Joe Raedle/Getty Images)

“The impact of the COVID-19 crisis continues to weigh on businesses of all sizes,” Ahu Yildirmaz, co-head of the ADP Research Institute, said in a statement. “While the labor market is still reeling from the effects of the pandemic, job loss likely peaked in April, as many states have begun a phased reopening of businesses.”

The pandemic, and the ensuing economic lockdown, once again wallopped the services-providing sector, which accounted for more than 1.97 million of total losses. That's compared to 794,000 from goods producers.

Trades, transportation and utilities lost 826,000 positions last month, the highest of any sector. Manufacturing posted the second-biggest decline of 719,000.

Since the virus gained a foothold in the U.S. in mid-March, forcing a majority of states to shutter nonessential businesses and direct residents to stay at home, 40 million Americans have filed for first-time jobless benefits.

The data is typically a good indicator of what to expect in the more closely watched jobs report from the Labor Department on Friday, which is predicted to show the U.S. economy lost 8 million jobs last month. Analysts anticipate unemployment will skyrocket to 19.7 percent from April's 14.7 percent, the highest since the Great Depression.

Get updates on this story at foxbusiness.com.