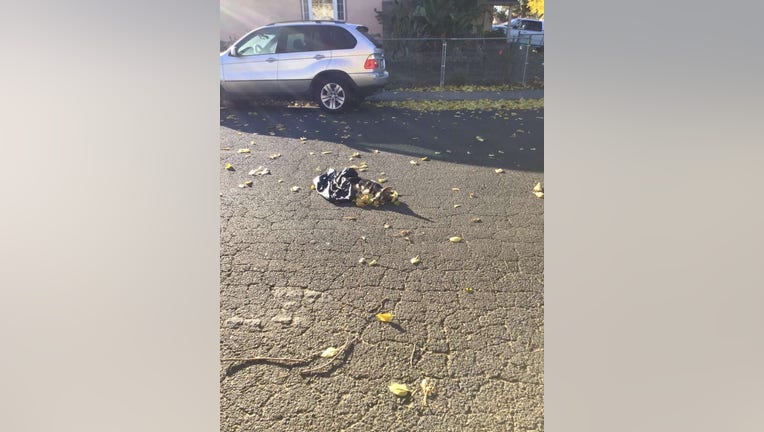 Vallejo resident Andrea Stornetta said she and her husband discovered three dead dogs, all in separate bags, in her Vallejo neighborhood.

VALLEJO, Calif. - Three dead dogs were found in plastic bags in the street of a Vallejo neighborhood, according to the resident who made the shocking discovery Monday morning.

A resident who has lived in Vallejo for 20 years said her husband was on his way to work around 8 a.m. when he called to report what he hoped he did not see, which looked like a small dog. She said she rushed outside and found a dog in one bag at the end of Courtland Circle.

Two additional bags, each with a dead dog, were found around the corner on Falcon Drive. All of the bags were partially wrapped in duct tape.

“They were beautiful, probably six to eight months old,” the resident said, adding the puppies looked to be German Shepherds. She requested anonylmity to avoid retaliation “It clearly didn’t look like they were sickly or had hair coming off or anything. I think there had to be some kind of abuse.”

The macabre discovery was posted on social media by other residents.

The resident expressed frustration with how the matter was handled initially, as it took 30 minutes to get through to Animal Control, she said. After getting someone on the phone, she was instructed to call Vallejo Recology.

The waste collection company said it was around 10 a.m. they would be out to pick up the gruesome discovery by the end of the day, but it was Vallejo Animal Control that arrived shortly after, according to the resident.

“I just want justice for those three poor puppies,” she said. “At the end of the day, it’s just a sad thing."

A responding animal control officer told the resident they would be investigating the matter. KTVU has reached out to Vallejo Animal Control to confirm but has not yet heard back.

Watch the most recent KTVU newscast or see what we're streaming: