Tanya Trujillo with the U.S. Department of the Interior says, "This year we’re seeing the combined affects of lower than average snow packs, hotter temperatures and drier than average soil conditions."

WASHINGTON - U.S. officials on Monday declared the first-ever water shortage from a river that serves 40 million people in the West, triggering cuts to some Arizona farmers next year amid a gripping drought.

Water levels at the largest reservoir on the Colorado River — Lake Mead — have fallen to record lows. Along its perimeter, a white "bathtub ring" of minerals outlines where the high water line once stood, underscoring the acute water challenges for a region facing a growing population and a drought that is being worsened by hotter, drier weather brought on by climate change.

States, cities, farmers and others have diversified their water sources over the years, helping soften the blow of the upcoming cuts. Federal officials said Aug. 16's declaration makes clear that conditions have intensified faster than scientists predicted in 2019, when Arizona, Nevada, California and Mexico agreed to give up shares of their water to maintain levels at Lake Mead. 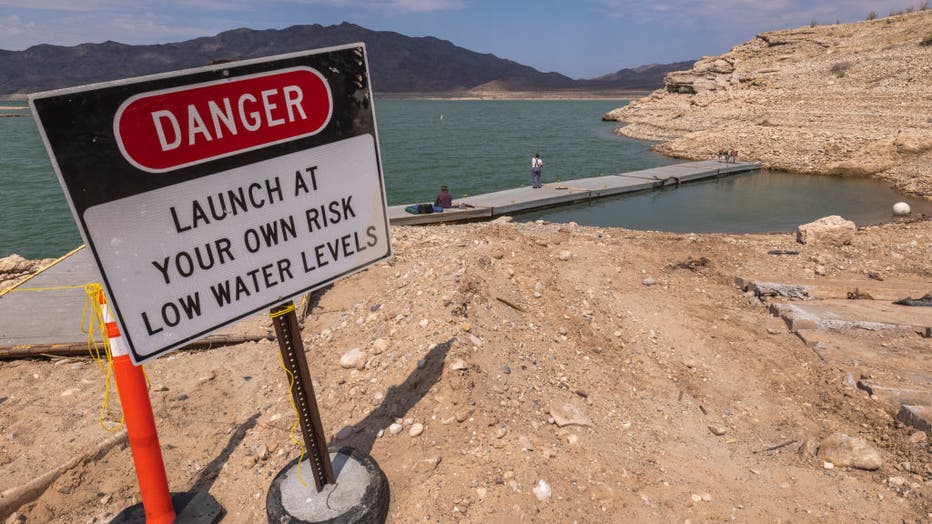 "The announcement today is a recognition that the hydrology that was planned for years ago — but we hoped we would never see — is here."

Lake Mead was formed by building Hoover Dam in the 1930s. It is one of several man-made reservoirs that store water from the Colorado River, which supplies household water, irrigation for farms and hydropower to Arizona, California, Colorado, Nevada, New Mexico, Utah, Wyoming and parts of Mexico.

But water levels at Lake Mead and Lake Powell, the river’s two largest reservoirs, have been falling for years and faster than experts predicted. Scorching temperatures and less melting snow in the spring have reduced the amount of water flowing from the Rocky Mountains, where the river originates before it snakes 1,450 miles (2,334 kilometers) southwest and into the Gulf of California. 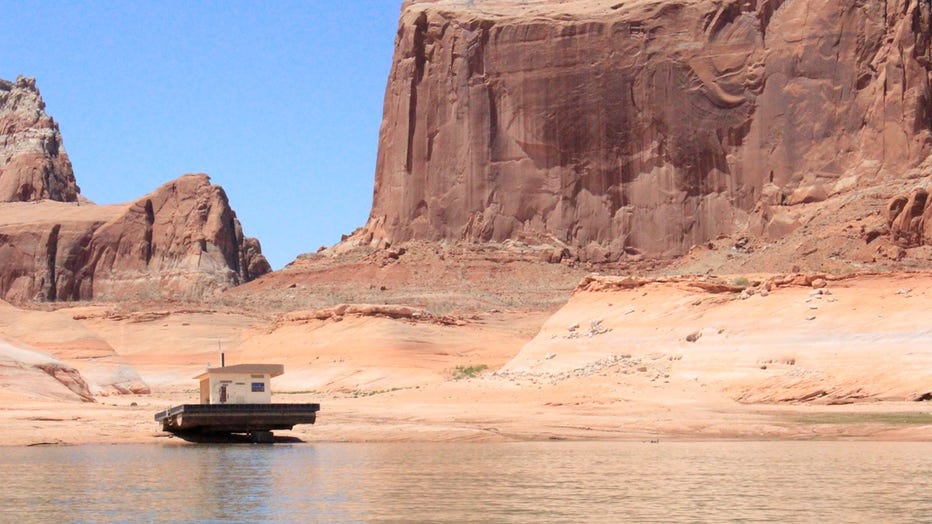 "We’re at a moment where we’re reckoning with how we continue to flourish with less water, and it’s very painful," said Sarah Porter, director of the Kyl Center for Water Policy at Arizona State University.

From the Bureau of Reclamation:

Plans that have been developed over the past two decades lay out detailed operational rules for these critical Colorado River reservoirs: 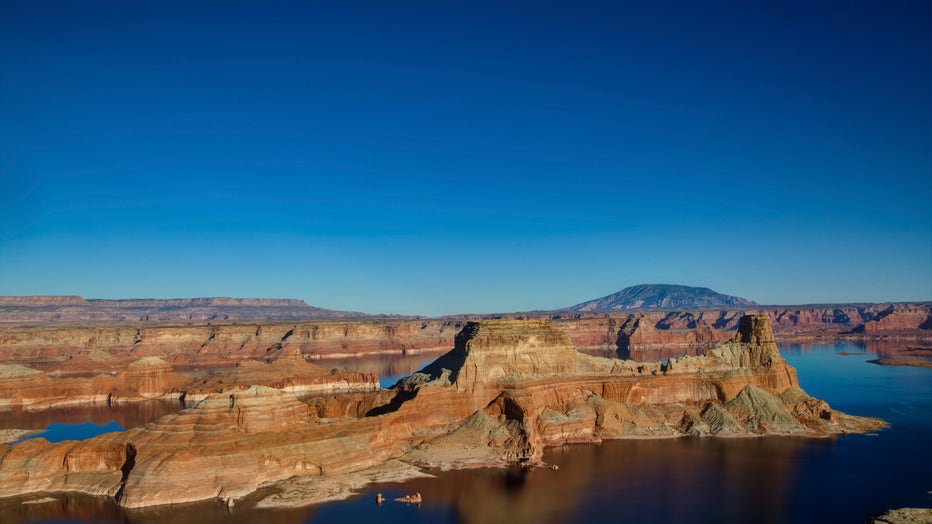 Tanya Trujillo with the U.S. Department of the Interior says, "This year we’re seeing the combined affects of lower than average snow packs, hotter temperatures and drier than average soil conditions."

How is the river water shared?

Water stored in Lake Mead and Lake Powell is divvied up through legal agreements among the seven Colorado River basin states, the federal government, Mexico and others. The agreements determine how much water each gets, when cuts are triggered and the order in which the parties have to sacrifice some of their supply.

Under a 2019 drought contingency plan, Arizona, Nevada, California and Mexico agreed to give up shares of their water to maintain water levels at Lake Mead. The voluntary measures weren't enough to prevent the shortage declaration.

Phoenix's response to drought and how it impacts the city

"The Bureau of Reclamation’s Tier 1 Shortage declaration does not come as a surprise, as it is reflective of serious drought conditions across the Western United States. The City of Phoenix has been working for the last several decades to diversify water resources, store water for future use, and invest in infrastructure to enhance the city’s resilience to drought," said Phoenix Mayor Kate Gallego. "Phoenix has a strong legacy of conservation and wise water use to build upon. It is crucial that we continue to develop these strategies and bolster our city’s response to the effects of a warming climate."

U.S. officials declared the first-ever water shortage from a river that serves 40 million people in the West, triggering cuts to some Arizona farmers next year amid a gripping drought.

Who does Lake Mead serve?

Cuts for 2022 are triggered when predicted water levels fall below a certain threshold — 1,075 feet (328 meters) above sea level, or 40% capacity. Hydrologists predict that by January, the reservoir will drop to 1,066 feet (325 meters).

Eventually, some city and industrial water users could be affected.

Colorado, New Mexico, Utah and Wyoming get water from tributaries and other reservoirs that feed into Lake Powell. Water from three reservoirs in those states has been drained to maintain water levels at Lake Powell and protect the electric grid powered by the Glen Canyon Dam.

Which states will be affected by the cuts?

An acre-foot is enough water to supply one to two households a year.

Nevada will lose about 7% of its allocation, or 21,000 acre-feet of water. But it will not feel the shortage because of conservation efforts and alternative sources of water.

California is spared from immediate cuts because it has more senior water rights than Arizona and Nevada.

Who in those states will see their water supply cut?

Farmers in central Arizona, who are among the state’s largest producers of livestock, dairy, alfalfa, wheat and barley, will bear the brunt of the cuts. Their allocation comes from water deemed "extra" by the agency that supplies water to much of the region, making them the first to lose it during a shortage.

As a result, the farmers will likely need to fallow land — as many already have in recent years because of persisting drought — and rely even more on groundwater, switch to water-efficient crops and find other ways to use less water.

Water suppliers have planned for the shortage declaration by diversifying and conserving their water supply, such as by storing water in underground basins. Still, water cuts make it harder to plan for the future.

The Central Arizona Project, which supplies water to Arizona’s major cities, will no longer bank river water or replenish some groundwater systems next year because of the cuts.

"It’s a historic moment where drought and climate change are at our door," said Chuck Cullom of the Central Arizona Project.

Cities such as Las Vegas, Phoenix and Tucson, and Native American tribes are shielded from the first round of cuts.

Can the decline of Lake Mead be reversed?

Water levels at the reservoir have been falling since 1999 due to the dry spell enveloping the West and increased water demand. With weather patterns expected to worsen, experts say the reservoir may never be full again.

Though Lake Mead and Lake Powell could theoretically be refilled, planning for a hotter, drier future with less river water would be more prudent, said Porter of Arizona State University.

The Associated Press receives support from the Walton Family Foundation for coverage of water and environmental policy. The AP is solely responsible for all content. For all of AP’s environmental coverage, visit