TAMPA, Fla. - This year’s busy hurricane season is getting even busier. Forecasters say we will soon have the first Atlantic hurricane of the year, and could also have a tropical storm in the Gulf of Mexico.

Tropical Storm Gonzalo remains far out in the Atlantic, moving west at 14 mph. The National Hurricane Center expects it will strengthen into a hurricane by tomorrow; a hurricane watch has been issued for St. Vincent and the Grenadines.

But as Gonzalo enters the Caribbean this weekend, it will begin to counter some dry air and Saharan dust and may weaken.

"In fact, if the system can’t find a way to get reorganized, then weakening will take place to the point of eventual dissipation – something that various models have hinted at from the beginning," FOX 13 meteorologist Tyler Eliasen blogged.

It’s still too early to tell what impact Gonzalo may have on the United States, if any. 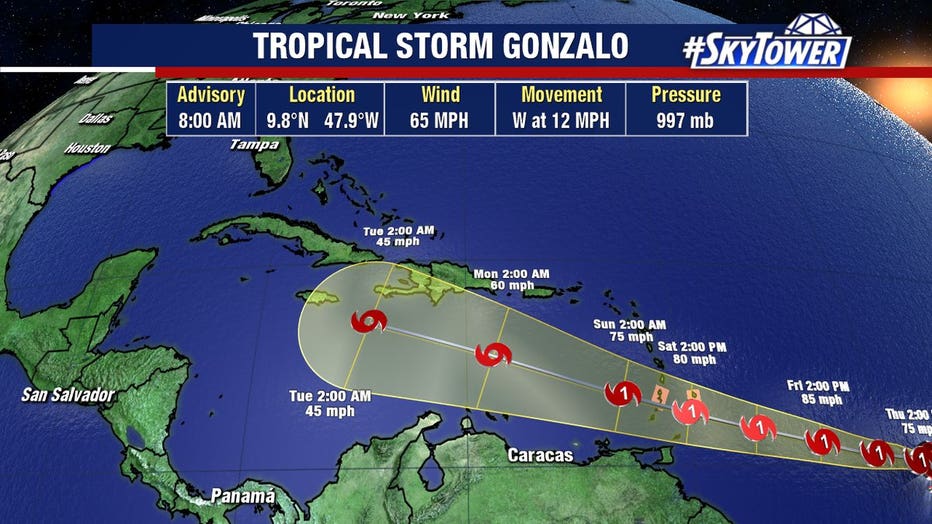 Closer to home, Tropical Depression Eight is moving across the Gulf of Mexico. As of Thursday morning, the system’s center was still not well-defined. It had sustained winds of 35 mph and was moving west-northwest at 9 mph.

Forecasters expect it to strengthen into a tropical storm before making landfall in southern Texas; a tropical storm watch has been issued for the coast there, and heavy rains are expected regardless of the storm’s exact strength.

Assuming T.D. Eight reaches tropical storm strength, the next name on the list is Hanna. It would become the earliest H-named storm on record."