Texas is becoming increasingly competitive politically as the population and demographics change.

But that could potentially change this year, experts say.

The Lone Star State is seeing rapid transformation, and thus it is increasingly becoming known as a highly contested potential battleground state ahead of the 2020 election.

“I think Texans are very aware that they’re in the spotlight,” James Henson, a political science professor at the University of Texas said. “It’s not entirely new, but it’s increased in the last couple of elections as Texas becomes more competitive.”

The Lone Star State is seeing rapid transformation, and thus it is increasingly becoming known as a highly contested potential battleground state ahead of the 2020 election.

In fact, the transformation is so apparent that the 2020 election could be the first time Democrats capture Texas in a presidential election since 1976, thus bringing the state a great deal of attention ahead of November’s election.

If Democrats are able to eke out a win in Texas, they could pick up 38 electoral votes, which is second only to California’s 55, a substantial number of votes needed to win the presidency.

Texas became a state in December 1845 and participated in its first presidential election in 1848. But Texas seceded from the Union in 1861, so it was not included in the 1864 and 1868 elections.

From 1872 through 1976, Texas voted Democratic in the large majority of presidential elections.

RELATED: Am I registered to vote in Texas? Deadline to register is October 5

But in 1980, that all changed when Texas voted Republican and chose Ronald Reagan to lead the country as the 40th president of the United States.

The win was only the beginning of a spate of Republican wins, cementing Texas as a dominated red state. 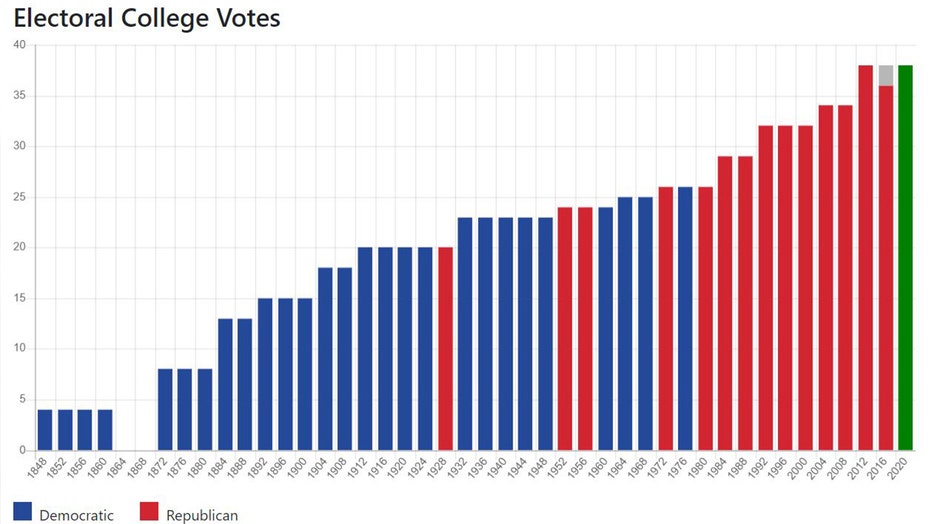 Texas has chosen Republican candidates in every presidential election since 1980, casting the state as a reliable GOP stronghold ever since.

But within the last decade, the state has undergone a significant shift.

A changing electoral landscape in Texas

In 2012, Republican presidential nominee Mitt Romney won in the state by a whopping 16 points against Barack Obama.

Then in 2016, Donald Trump won the presidential election in the state by about 9 points — a margin of 52% to 43% over Hillary Clinton, though Clinton was able to pick up nearly double the points that Obama did in 2012.

O'Rourke only fell roughly 220,000 votes short out of 8.3 million — the closest to winning a statewide office than any Texas Democrat in a generation, the Texas Tribune reported.

Also, in the state legislature, Democrats gained 12 Texas House seats in 2018, marking the biggest shift in the lower chamber since the 2010 midterm elections.

As of Sept. 21, a rolling average of national presidential polls showed Trump only leading Biden in the state of Texas by 0.8%, less than one percentage point. 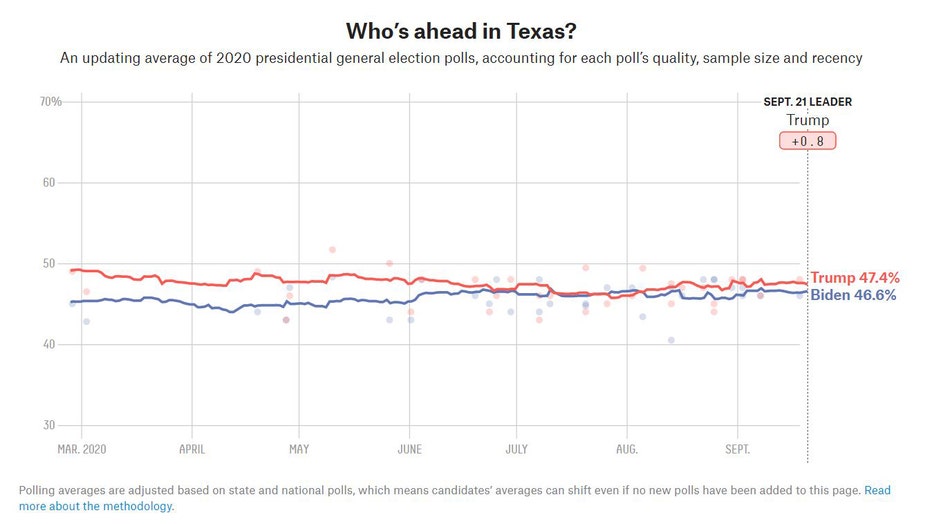 A rolling average of national presidential polls on Sept. 21 (FiveThirtyEight)

Several polls recently released show Trump leading Biden by 1-2 percentage points, and a few polls have shown Biden ahead by as much as 4 points.

The aggregate result, it seems, is that Biden and Trump are basically tied, and the race is likely to be a tight one in Texas.

Independent and undecided voters may have a larger impact

In a 2017 Gallup poll regarding political affiliation, 38% of individuals identified as Democrats/lean Democratic and 41% identified as Republicans/lean Republican, classifying the state as “competitive.”

But that also means that 21% did not identify as Democratic- or Republican-leaning, which shows independent voters could have a stake in this election.

Henson said there has been an erosion of support among true political independents.

While independents only make up 9-12% of the population, this could make a difference during a hotly contested election year. 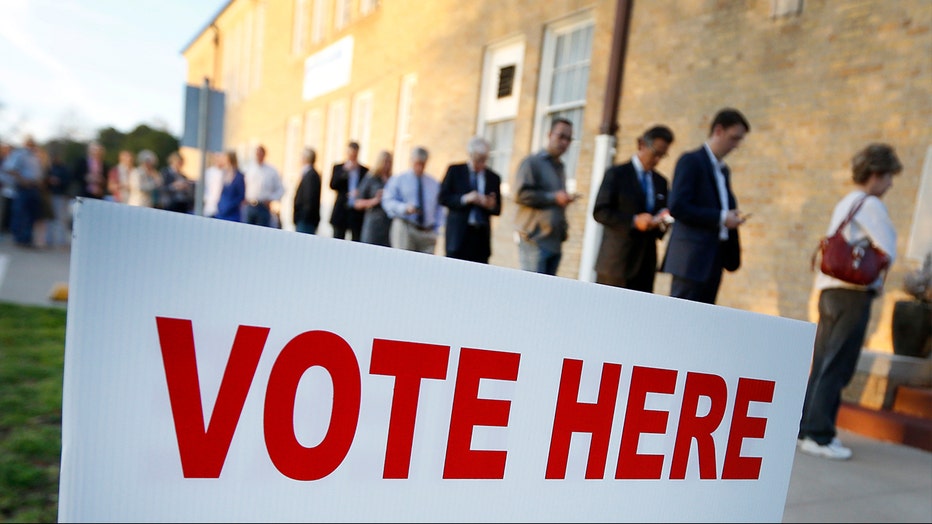 Voters line up to cast their ballots on Super Tuesday March 1, 2016 in Fort Worth, Texas.

“When the polling between Democrats and Republicans begins to get close and more people get engaged and the polls get very close, within a point or two, all of a sudden those independents that frankly haven’t gotten much attention in Texas in recent years become very important, because they are seen by the campaigns as persuadable voters,” Henson said.

So, what is steering this political shift?

“The change has been brewing for a while,” Henson said, citing that the state is becoming increasingly competitive.

According to Henson, the state isn’t necessarily seeing a fundamental shift, but an erosion of the Republican advantage, due, in part, to the increase in population and a change in demographics in the state.

Texas’ population has shown rapid growth, increasing 15.3% between April 2010 and July 2019. That’s an increase of over 3.8 million people in the state, according to Census.gov.

Texas is growing so much it is on track to gain three additional seats in the House of Representatives and three electoral votes after the 2020 Census, potentially giving it 41 beginning with the 2024 presidential election.

In 2005, the United States Census Bureau announced that Texas had become a majority-minority state, only one of five states to hold that status.

According to Dr. B. Dan Wood, a political science professor at Texas A&M University, age may be a factor, and he cited that the Texas electorate is becoming younger.

“During this coming election, one in three Texas voters will be under age 30. The anti-Trump sentiment in Texas among young people and women is very strong. If these people turn out, then Texas will probably turn blue,” Wood said.

Not only that, but the cities and suburbs in Texas are also changing, as they become highly urbanized, more diverse and populated. 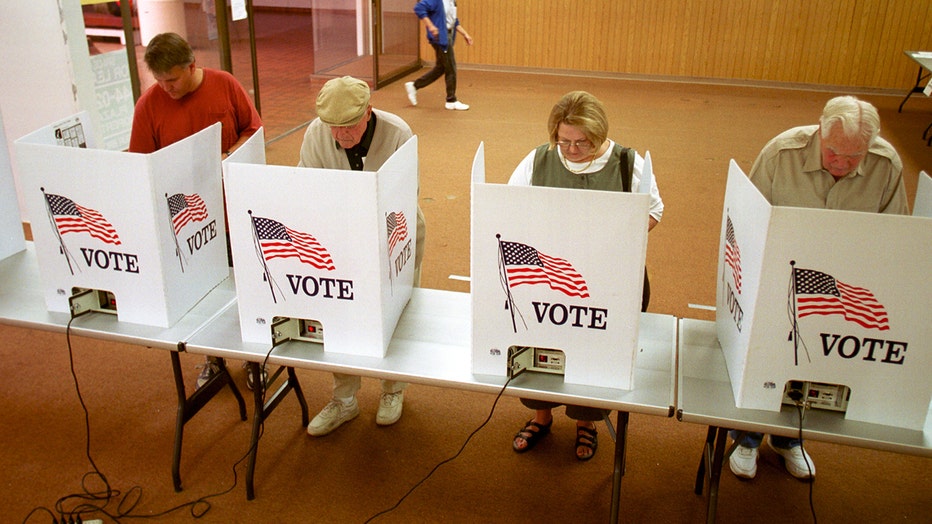 Residents of El Paso, Texas cast their ballot for president of the United States in early voting, October 23, 2000.

Henson cited that the demographics have changed in the suburbs as the expense in major cities increases.

“Many Democrats can no longer afford to live in the major cities and are moving out to the suburbs which is now changing the composition of those suburbs,” Henson added.

“This has been a very unpredictable political environment,” Henson said.

The final decision will come to how engaged voters are and how many turnout for the 2020 election.

Wood said the number one issue for Texans is health care. “This broad category includes the fate of the Affordable Care Act, people’s long-term health security, as well as the response to COVID-19,” Wood said.

RELATED: How to cast your ballot without using USPS ahead of the 2020 election

Henson said that Trump will need to persuade Texans that the economy is recovering and that Biden is a threat to a recovering economy. “There is some skepticism about that among those independents and among some of these persuadable voters,” Henson said.

On the flipside, Biden will need to persuade every voter to continually think about whether Trump has done an effective job managing the pandemic.

According to a recent poll by NPR/PBS/Marist, more than half of Americans - 56%- disapprove of the job Trump has done handling the pandemic.

“They [the campaign] need this to be a referendum how Donald Trump has handled the pandemic and its effects full stop.” 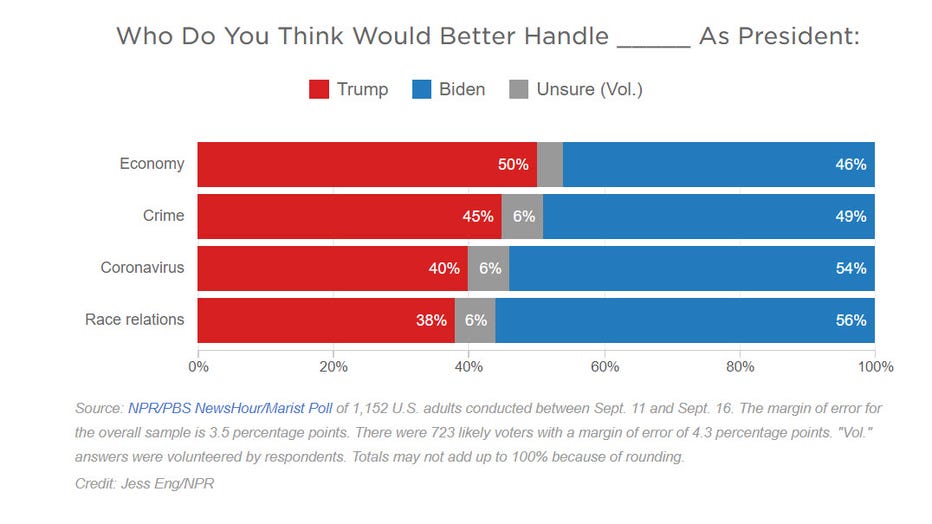 Wood also said the unexpected Supreme Court nomination could also be a factor in turning out the evangelical vote. “However, it is also likely to spark increased turnout among women and those on the left who are opposed to overturning Roe v Wade, as well as other social issues such as gay rights, women’s rights, etc.,” Wood said.

So, could Democrats win Texas for the first time since 1976?

“You still have to give the advantage to the Republican party,” Henson said. “But the magnitude of those advantages have been eroding over the last six to eight years.”

Wood said it could happen. “It is possible that Texas turns blue in the coming presidential election,” Wood added. “However, it will depend on turnout among anti-Trump voters (young people, non-Whites, college-educated).” 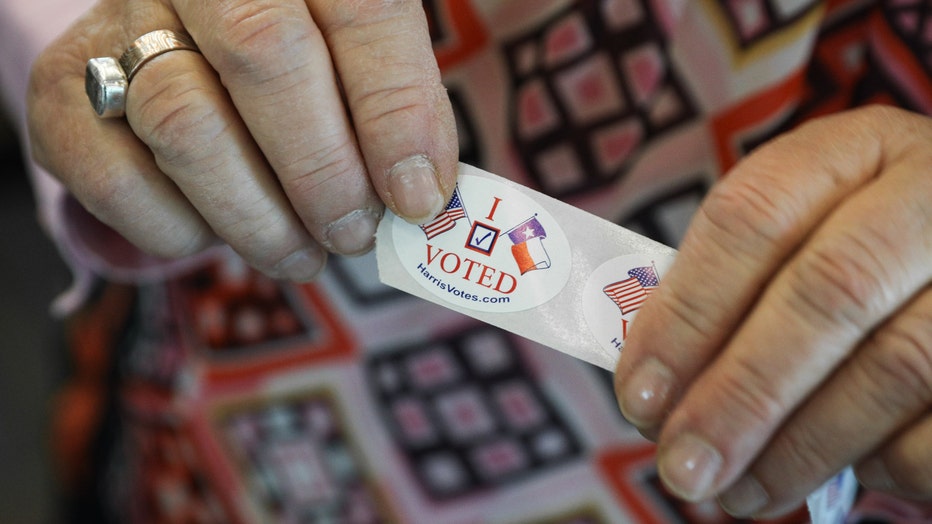 A woman hands out "I voted" stickers to voters at the Rummel Creek Elementary polling place on November 6, 2018 in Houston, Texas

Henson believes the more likely outcome is that the election will show closer margins, and Biden will likely do better than Hillary Clinton did in 2016.

But Democrats also have a chance to flip the Texas state House, as they need to pickup less than 10 seats.

Henson said he is skeptical about the possibility of a complete shift in Texas.

“I think the safe money is still on Democratic gains without any kind of fundamental transformation in the state,” Henson said. “It could happen. But if it happens, it will be because some of the longer-term trends that have been percolating in this state are accelerated really drastically by national events.”