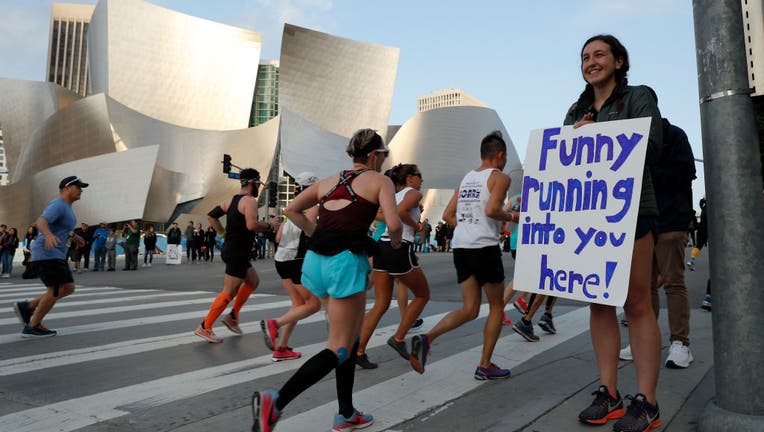 LOS ANGELES - The 2021 Los Angeles Marathon has been rescheduled for May 23 and the LA Big 5K to May 22 because of the coronavirus pandemic, pending final approval of all city partners, applicable health departments and other governmental agencies, organizers announced.

Both events are being planned for two days on separate weekends in January and March to ensure proper runner and walker distancing as well as a safer, more manageable event flow, according to the foundation operated by the family of former Los Angeles Dodgers owner Frank McCourt.

The rescheduling was made "after careful consideration and following guidance provided by the Medical and Operations Advisory Group," the foundation said.

March and May event dates will continue to be evaluated to meet the highest possible health and safety of participants, volunteers and partners, according to the foundation. These considerations will include:
• significantly limiting field sizes;
• COVID-19 vaccinations and rapid-testing for participants;
• mask use; and
• hygiene practices and procedures.

The McCourt Foundation announced in July a major course change to the Los Angeles Marathon, replacing the "Stadium to the Sea" course it had been run on since 2010 to a "Stadium to the Stars" course from Dodger Stadium to Brentwood where runners will double back on San Vicente, Sepulveda and Santa Monica boulevards, ending at Avenue of the Stars in Century City.

The change was made because "the dramatically increased costs quoted by the city of Santa Monica for the 2021 running of the marathon, and future events, made remaining in Santa Monica financially infeasible,'' according to the foundation.

"The finish on Avenue of the Stars also allows exciting modifications not previously possible in Santa Monica such as enhanced spectator viewing and celebrations at the finish line," the foundation said.

The "Stadium to the Sea" course began at Dodger Stadium and ended near the Santa Monica Pier.

The Los Angeles Marathon has been held in March since its inaugural edition in 1986 except for 2009 and 2016.

The race was shifted to May 25 in 2009, Memorial Day, after its rights were bought in 2008 by a group controlled by McCourt. The City Council stipulated that the race be shifted to a Monday holiday to limit the impact on Sunday morning church services.

The Memorial Day date drew criticism from runners because of the likelihood of warmer weather. Then-City Councilwoman Janice Hahn called holding the race on Memorial Day "really kind of an insult and disrespect to our veterans and those who have served this country.

The marathon returned to March the following year.

The race was run on Feb. 14 in 2016 so it could coincide with the U.S. Olympic Team Marathon Trials held a day earlier.

Ownership of the Los Angeles Marathon and other races was donated by McCourt from his Conqur Endurance Group to his family's foundation in 2019.