RIGBY, Idaho - A sixth-grade female student was taken into custody Thursday after bringing a gun to school in Idaho and shooting multiple people before being disarmed by a teacher, authorities said.

Officials said the student pulled the handgun from her backpack and fired multiple rounds inside and outside Rigby Middle School, located in a small city just outside of Idaho Falls. Two students and a custodian were wounded.

Jefferson County Sheriff Steve Anderson said all three victims were shot in their extremities and are expected to survive their injuries.

A female teacher disarmed the girl and held her until law enforcement arrived and took her into custody, authorities said, without giving other details. Authorities said they're investigating the motive for the attack and where the girl got the gun. 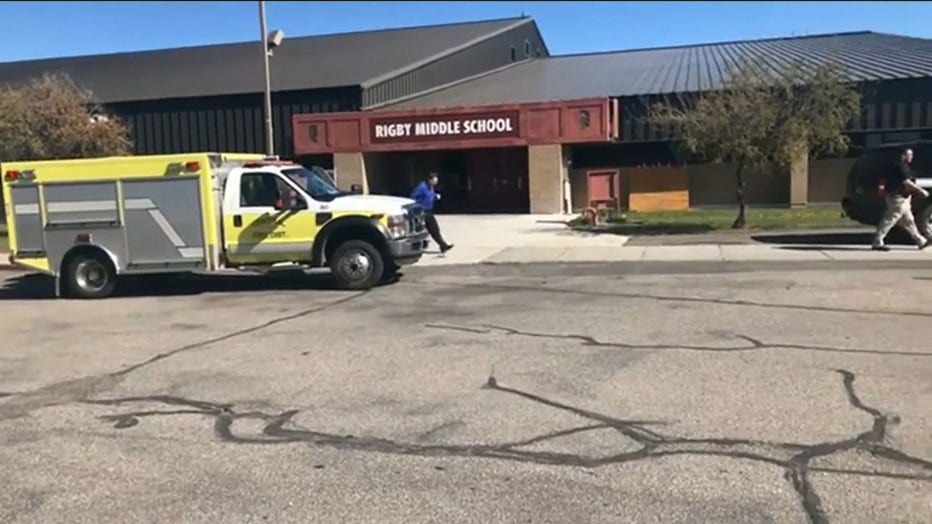 Rigby Middle School is pictured after a shooting left three injured on May 6, 2021. (Photo credit: KIDK-TV)

Multiple law enforcement agencies responded to the shooting, reported around 9: 15 a.m. local time, and students were evacuated to a nearby high school to be reunited with their parents.

"Me and my classmate were just in class with our teacher — we were doing work — and then all of a sudden, here was a loud noise and then there were two more loud noises. Then there was screaming," 12-year-old Yandel Rodriguez told the Associated Press. "Our teacher went to check it out, and he found blood."

Yandel's mom, Adela Rodriguez, said they were OK but "still a little shaky" from the shooting as they left the campus.

"Today we had the worst nightmare a school district could encounter. We had a school shooting here at Rigby Middle School," Jefferson School District Superintendent Chad Martin said. "What we know so far is the shooter has been apprehended. There is no further threat to the students."

Rigby Middle School has more than 1,500 students in sixth through eighth grades, according to the National Center for Education Statistics.

"I am praying for the lives and safety of those involved in today’s tragic events," Gov. Brad Little said in a statement. "Thank you to our law enforcement agencies and school leaders for their efforts in responding to the incident. I am staying updated on the situation."

The attack appeared to be Idaho's second school shooting, according to the AP. In 1999, a student at a high school in Notus fired a shotgun several times. No one was hit by the bullets, but a student was injured by ricocheting debris from the first shell, the news outlet reported.

Editor’s note: This story previously stated the shooter was a male based on local news reports. Authorities have since clarified the student was female.