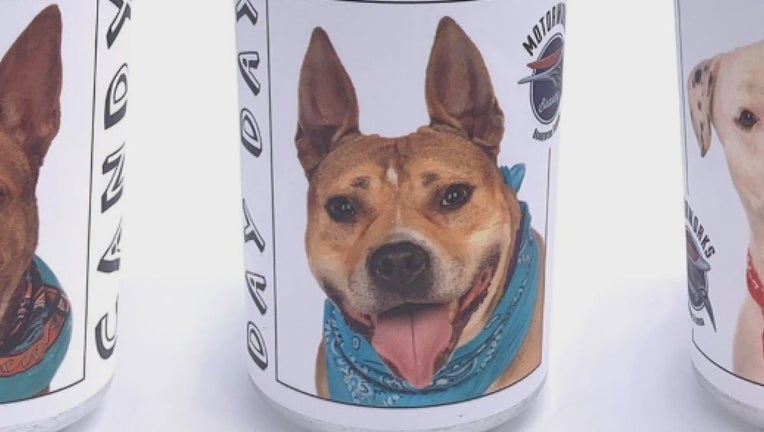 Through sheer luck, Mathis says she spotted Hazel's face on the side of a beer can featured in a Facebook ad for the brewery. (Motorworks Brewing)

ST. PAUL, Minn. (FOX 9) - Three years ago, Monica Mathis lost her dog while she was living in Iowa.

In 2020, now living in Minnesota, Mathis thought she'd never see Hazel ever again. But, through improbable circumstances, Mathis was able to track down her long-lost pet and now the two are set to be reunited.

3 years after going missing, St. Paul woman recognizes lost dog on side of beer can from Florida brewery

In 2020, now living in Minnesota, Mathis thought she'd never see Hazel ever again. But, through improbable circumstances, Mathis was able to track down her long-lost pet and now the two are set to be reunited.

Mathis says she was just scrolling through Facebook when a post caught her eye. It was an ad for a Florida brewery with a familiar face on the side of one of the cans.

The post from Motorworks Brewing showed their line of beer cans with the faces of shelter dogs in Manatee County, Florida on the sides, part of the effort to showcase adoptable pets.

"I really didn’t think that I was ever going to see her again," said Mathis. “I’ve been thinking about her everyday, but you know, that was my baby.”

Just as you’d recognize a long-lost member of your family, Mathis recognized the face of her long-lost Hazel in that Facebook advertisement.

"The smile, the ears, her defining ears," recalled Mathis, "and just the markings on her face."

"I was doubtful because it was Florida, but it’s not like I was just going to brush it off," she added. "I have to check."

Monica called immediately, hoping her hunch was right that the dog at the shelter was really her Hazel.

“We saw photos and vet records," said Hans Wohlgefahrt of Manatee County Animal Services. "This dog was such an important part of her family that she had everything to prove she was her owner."

Wohlgefahrt says Hazel also had a microchip with some information that showed Mathis as the owner. However, the contact information was out-of-date, and the shelter wasn't able to track her down.

Mathis said she had lost information for the chip and wasn't able to update the contact information after moving from Iowa. But now, years later, she is set to get her dog back home.

"I was so lucky," Mathis said. "So lucky that I saw that...that she actually got picked and got put on a can, because I would have probably never seen her again had I not seen that."

Hazel is set to make her way back to Minnesota in the next few weeks.