No one was hurt, but police say the victims are still shaken by the incident at the Jared jewelry store near 75th Ave. and Bell Rd. at Arrowhead Towne Center. Now we're seeing the moments when the suspects were taken into custody. FOX 10's Desiree Fluellen reports.

GLENDALE, Ariz. - Glendale Police officials have released new details surrounding an armed robbery incident at a jewelry store on the night of March 16.

According to a statement released on March 17, police were called to a Jared jewelry shop near 75th Avenue and Bell Road just before 7 p.m. on March 16, after a woman called 911 reporting the incident.

The woman who made the call is an employee who was in the back of the store at the time. She gave police the address, but hid her phone. She did not, however, hang up the call, so police could hear what was going on. She eventually got back on the line with police.

"There were four males. They were all African American men. One had a purple mask on. All in sweatpants and hoodies," said the woman.

"The suspects took both jewelry from the store and personal items from the victims," read a portion of the statement. 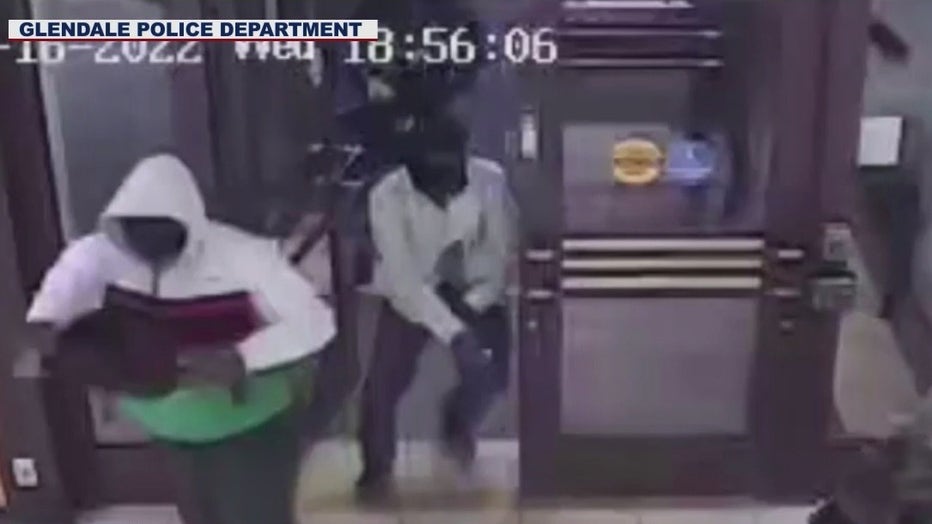 When officers arrived at the scene, officials say they say three of the suspects running out the front door, while a fourth suspect ran out the back door. All four were subsequently taken into custody.

According to court documents, one employee was forced, at gunpoint, to lead one of the suspects to the safe. Several victims later told police they were tied up with zip ties. The suspects allegedly took personal items, including phones, from the victims, along with cash.

"No victims reported any physical injuries, and at this time, a monetary amount of over $1.5 million has been recovered," read a portion of the statement. "Detectives are still [taking inventory of] the recovered items, and the value continues to climb, possibly believed to total over $2 million."

Officer Tiffany Ngalula with Glendale Police said if it weren't for that 911 caller, it could have been a very different outcome.

"Had it not been for her, we wouldn't have gotten there as quickly had we not had the right information," said Officer Ngalula. "It's a great success story all around, to include the bravery of that one."

The incident, according to Glendale Police officials, happened in the area of 75th Avenue and Bell Road on March 16. Now, police are offering more details on what happened. FOX 10's Irene Snyder reports.

We have obtained court documents of the four suspects, and they were identified as Garry Wayne Freeny, Monta Lamont Harris, Deandre Donte Haven, and Kenneth Ray Walton, Jr.

All four are accused of committing a variety of criminal offenses, including robbery, aggravated assault, kidnappings, and weapons-related offenses.